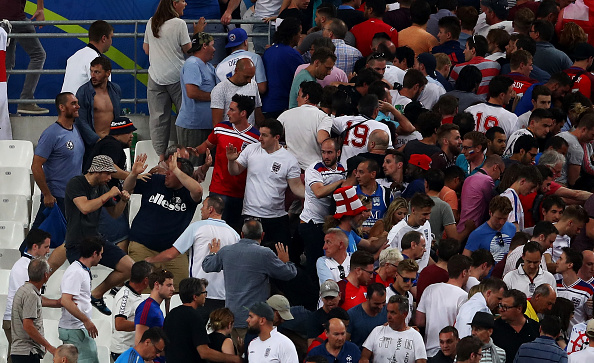 UEFA is sending a message to the Russia that if select fans don’t start behaving themselves, the national team is going to be booted from Euro 2016.

According to NBC Sports, Team Russia was handed a suspended disqualification and a fine of $168,000 for the actions of Russian fans following a 1-1 draw in a game against England in Marseille. Should more violence occur in the stadium, Russia will automatically be disqualified from Euro 2016.

According to reports over 150 trained Russian hooligans were in the crowd fighting with English fans. Russia and England faced a possible disqualification over the fights. They were also charges for racism and setting off fireworks in the stadium. It was an incredibly bad look for both countries and the sport. Russian fans seemed to instigate the fights, but England fans were also in the wrong.

Russian striker Artem Dzyuba said in a press conference on Tuesday that Russia shouldn’t take all the blame.

“We have this impression that English supporters are like angels… You have to be objective. It’s 50-50,” Dzuyba said.”

The behavior of Russian fans is almost out of the control of the national team. If one drunk fan decides to start an altercation during a game, the team will be disqualified. It might seem like a tough, somewhat unfair ruling but if teams aren’t responsible for the actions of their fans, who is? Hopefully, a potential disqualification warning is what’s needed to stop violence from occurring at Euro 2016. Select Russian fans need to borrow a page from Sweden and Ireland fans and learn to get along with others —otherwise, their tourneys will be effectively over.