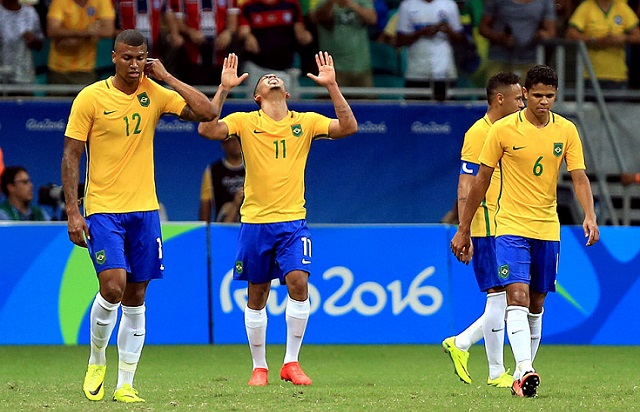 There perhaps isn’t another country that has wrapped its identity so tightly around a team as Brazil has its Seleção, the national soccer outfit. The enormous South American nation has a history of volatility, of colonialism and slavery, and military dictatorship and violence. It has seen wild swings in prosperity and stability.

But through it all, the soccer team was there, performing and winning things like a steady drumbeat. Five World Cups, more than any other country. Four Confederations Cups, twice as many as any other country. Their soccer was joyous. They made the game beautiful. Pele and Zico and Ronaldo and Ronaldinho were performance artists far ahead of their time, swinging and swaying about the field. Soccer was the pride of a nation.

Which is what makes the Brazilian game’s ongoing slump so unfortunate. For it coincides with a time when the country needs their gold-clad soccer heroes the most, desperate for an institution to cling to, something to believe in. After several years of fevered economic growth and a ballyhooed arrival on the international scene as one of the next big emerging markets, a savage recession has seen to the collapse of all that progress. Brazil’s president has been impeached. Her predecessor and interim successor are under investigation as well. The 2014 World Cup and ongoing Olympics are deeply unpopular, because the billions could have been put to much better use elsewhere – especially right now.

That expensive World Cup was hardly redeemed by the Brazilians’ failure to win it. Just like in 1950, when they also hosted the tournament, they fell short. Only this time they didn’t even reach the final. Worse than that, Brazil was hammered 7-1 in the semis by Germany, who would go on to win the thing.

It was a national humiliation the likes of which Brazil had scarcely known in modern times. And what’s worse, it set off a downward spiral it has yet to clamber out of. At the 2015 Copa America, the Canaries, so nicknamed for their jersey color, narrowly clawed their way out of their group. They were then beaten by Paraguay on penalties in the quarterfinals.

This summer, Brazil left superstar Neymar – the heir to the gigantic heritage of the attackers mentioned above – at home from the Copa America Centenario in order to spare him for the Olympics. But a tie and a loss wedged around a 7-1 destruction of Haiti saw to it that the Brazilians didn’t even survive the group stage in the United States.

That was okay, even if it induced the firing of head coach Dunga and his dour style and habitual ostracizing of key players. Because the Olympics would make everything right again. Brazil’s under-23 team, loaded with Neymar and Renato Augusto as their overage players and a slew of outstanding young bucks, would surely roll to the country’s first Olympic title – after three silver and two bronze medals in the last eight editions. At home. And everybody would forget about the World Cup. And the Copa Americas. All would be well again. The country would be inspired anew and perhaps this entire misbegotten enterprise to charm the world with back-to-back mega events would have produced something good after all.

But then the tournament actually began and Brazil tied the fetid South Africa and Iraq sides 0-0. The women’s team’s rollicking form in their own tournament, meanwhile, only underscored how far from grace the men had fallen. They needed a win against an underwhelming Danish team just to advance. On Wednesday, they got a cathartic 4-0 win in that game.

After the game, the release of stress and angst and frustration among the Brazilians was palpable even over a television feed. The pressure had mounted to insufferable levels. Because a loss and even a tie had put them in very real danger of not advancing and performing so far below expectations that they would have conjured not just another sporting disaster, but quite possibly a national identity crisis.

There are plenty of causes you could point to. In two stints in charge, Dunga – once the hard-tackling counter-weight in Brazil’s midfield of fanciful creators – had systematically dismantled its attacking ethos and replaced it with something pragmatic and unrecognizable. He played for results, not aesthetics. And, ironically, the results suffered. His teams were incapable of breaking down stodgy opponents, something that had once been Brazil’s specialty when it employed disheveling accelerations in their play.

Or maybe this just isn’t a very good generation. All of the greats had other almost-as-greats surrounding them. Pele had Garrincha and Carlos Alberto and Tostao, Rivelino and Jairzinho. Zico had Socrates and Toninho. Ronaldo had Romario and Rivaldo. Ronaldinho had those three, for the most part, as well as Cafu and Roberto Carlos.

Other than left back Marcelo, Neymar has no world-class players by his side. Holding midfielder Casemiro might yet get there. And if Dunga hadn’t shunted him, central defender Thiago Silva would be in that conversation as well. But, as a whole, his supporting cast is a far cry from what his predecessors as Brazil’s big star got to work with.

A cyclical thing, perhaps. Or maybe Brazil’s incorrigible habit of exporting its prospects at younger and younger ages, many years before reaching full maturity as players, is catching up to it in the form of the stunted development of its best talent. Consider that 19-year-old superprospect Gabriel Jesus, currently featuring at the Olympics, is already committed to Manchester City after just 33 league appearances for Palmeiras in the Brazilian league. Or that Gabriel Barbosa – dubbed “Gabigol,” in spite of never cracking the 10-goal threshold for Santos – is rumored to become a Leicester City player soon. He too is 19. Neither is likely to be a major contributor to their teams anytime soon. But off they go.

If those excuses are valid at all, none of them will be tolerated at these Olympics. Something has to give. And somebody must deliver. For its faults, there’s plenty of talent in this team. And they’ve got Neymar, one of the five best players in the world. Now that the goal drought is over, they can’t point to bad luck or fluke any longer either.

They need three more wins to keep the gold medal in Brazil. Their country is counting on them.