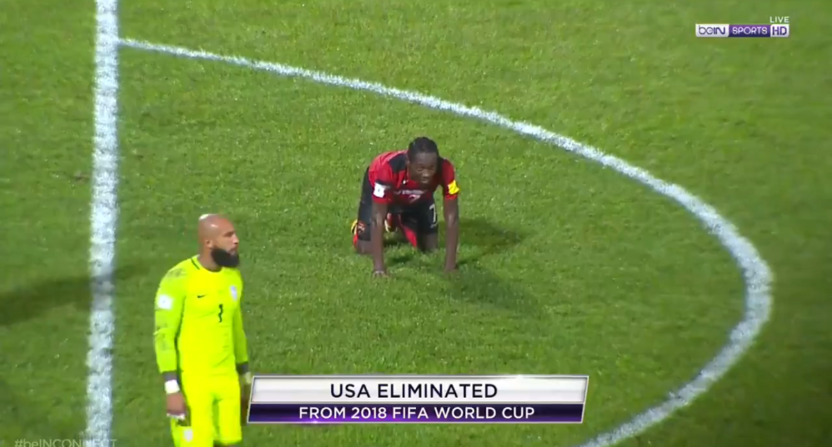 It seemed remote heading into tonight’s final round of CONCACAF qualifying matches, but the possibility was still there. The USMNT was still in danger of missing the World Cup. A loss paired with wins from both Panama and Honduras would see the United States miss next summer’s trip to Russia, and all the attendant attention that soccer would receive along with it.

But, surely, the USMNT would find a way to get at least a draw against the last-place team in the Hex, right?

No! Instead, they came out incredibly flat, playing a horrendous first half that saw the Americans fall behind 2-0. There was this own goal from Omar Gonzalez:

And this Trinidad golazo:

After the half, results in the other matches were still favorable to the United States, and an early Christian Pulisic goal gave the impression that the everything could be salvaged:

But then, disaster. Honduras went up 3-2 on Mexico. Panama was awarded a phantom goal against Costa Rica, and followed it up with a late winner. The United States went close a few times in the second half, never more so than Clint Dempsey’s shot off the post:

? @clint_dempsey off the post! @ussoccer still looking for a late equalizer. #TRIvsUSA pic.twitter.com/WkrBRXVUAP

And then a late clash of heads between Benny Feilhaber and Bobby Wood ended up directing the ball on goal, but to the corner covered by the keeper:

And then, after being thoroughly outplayed all evening, the Americans lost.

The United States has been in every World Cup since 1986. They won’t be in the next one.

There’s plenty of blame to go around, and many might start with that phantom Panama goal in Costa Rica, but let’s be clear: the Americans earned every single bit of this defeat. Trinidad and Tobago looked like the superior team for the entire night, and on the whole of Hexagonal qualifying, the USMNT finished right about where they deserved to, in fifth place.

Having started the round with defeats against Mexico and Costa Rica, Jurgen Klinsmann was fired, replaced by returning manager Bruce Arena. This move was hailed by many, and Arena did have a decent run of matches, including a Gold Cup win that doesn’t really matter at all, now. But from there, things devolved. The Americans lost 2-0 at home to Costa Rica last month, and then needed a last gasp goal to draw Honduras to even give themselves the cushion they wasted tonight.

So, what happens next? Well, the effects might not be felt for a while, but a few things are going to happen quickly. Tonight was likely the last game for Clint Dempsey, Tim Howard, and many more faces familiar to American soccer fans. Even team captain Michael Bradley is 30; he’ll likely take part in the next World Cup qualifying cycle, of course, but the odds of Bradley making another World Cup impact are incredibly long.

But regardless of the player pool, there will certainly be a change at the managerial level. Bruce Arena was brought in to do one thing: qualify for the World Cup. He was put in a tough spot, of course, but getting just twelve points from the remaining eight games was not good enough, whether or not the United States had backed their way to Russia. Now that they haven’t, it’s even more obvious.

Whatever you think of Arena’s performance, and tonight was particularly brutal, sending out an unchanged team from four days ago despite heat and a wet, soggy field, then waiting until the 84th minute for the final substitution, the final results rest with the players. The USMNT just wasn’t good enough, getting thoroughly outplayed at just about every turn, aside from the heroics of Christian Pulisic.

What an abject disaster for American soccer.