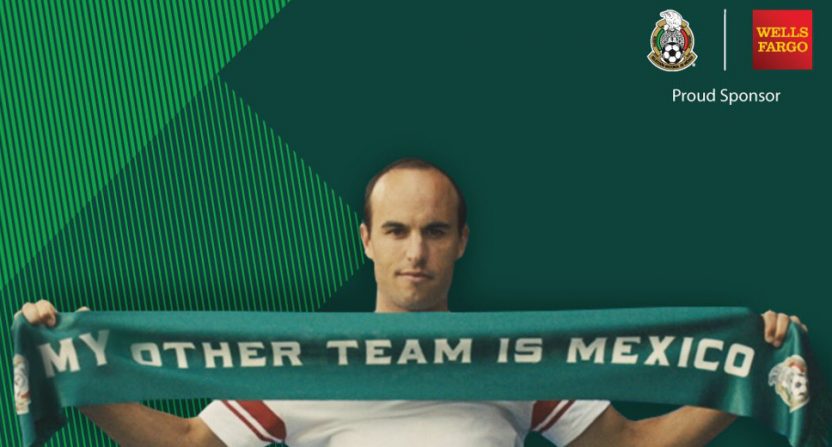 With the U.S. men’s national team not in this year’s World Cup, broadcasters and advertisers have shifted a lot of focus to Mexico. Last year, Fox Sports president Eric Shanks said his network’s English-language coverage planned to cover Mexico “as if it’s a second home team,” something they’ve lived up to so far, and brands from Bud Light through Estrella Jalisco, Modelo and Wells Fargo have gotten involved in promoting the Mexican team to American audiences. Former U.S. star Landon Donovan has been involved in the Modelo and Wells Fargo ads, and that hasn’t gone entirely well for him. In fact, he took significant criticism for it from former teammates Sunday, and then problematically tried to not only further explain himself, but also question those who criticized him:

You grew up in SoCal and owe much of your soccer skill to playing with Mexicans. Your father is of Mexican descent (🤦🏻‍♂️). Look around our country, are you happy with how we are treating Mexicans? Open your mind, stand for something & remember where you came from ✌🏼❤️ https://t.co/1oOD3asfDk

This is an incredibly terrible take. Questioning ones loyalties to culture and/or heritage because HE questioned YOU for taking marketing dollars to “root” for your SPORTING RIVAL?

You can hate El Tri- this doesn’t mean you have anything against Mexicans. ✊🏼 🇲🇽 🇺🇸 https://t.co/xF9JCI1qBC

Look, Donovan is entitled to do what he wants, and if that’s taking money to promote a team that’s the rival of the national team he used to play for, fine. Donovan also perhaps has reasons for a grudge against the USMNT and U.S. Soccer in general after he was controversially left out of the 2014 World Cup team. And if he wants to try and promote continental pride, whatever; it’s the same argument as college football fans telling others to root for conference rivals in a bowl game to make the overall conference look good, and there are many who despise that line of thinking, but if people want to think that way, they can. Fandom isn’t something with universal rules, and those who want to cheer for Mexico certainly can. But Donovan’s attempts to make this about politics beyond soccer and to criticize the former teammates who criticized him drew a lot of backlash. And, for what it’s worth, he did also offer a further statement (before his tweet to Bocanegra):

This was a totally predictable outcome. Trying to tell American fans to root for Mexico just because they share a continent is a controversial move in its own right, and bringing in U.S. soccer stars like Donovan to do so is even more controversial. But it’s Donovan’s reaction to Bocanegra that’s perhaps particularly not great, and while his tweeted statement perhaps further explains his views, it still didn’t go over well with everyone.

And that’s fine. If companies like Wells Fargo think paying Donovan to endorse the Mexican team is a good move for them, and if he thinks it’s worth it for him, both parties are certainly entitled to do that. And if they think the positive value they get from that outweighs the criticism, great. But it shouldn’t surprise anyone that these campaigns haven’t been universally well-received, and that there’s been a significant amount of backlash for both Donovan and the companies involved as a result.

2 thoughts on “Unsurprisingly, Landon Donovan’s Mexico ad campaigns have led to Twitter backlash and a statement of clarification”