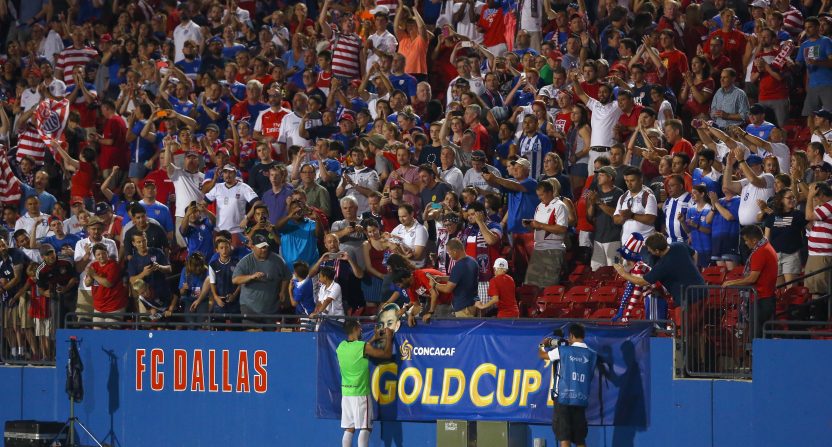 It’s hard to find a movie quote that applies more to life than that one. It can apply on both the macro and micro levels. Power at any amount wields responsibility even if it’s something as minuscule as possessing knowledge and passing it on to those that don’t have it.

That is where the U.S. soccer media, in general, have let us down.

Ever since Landon Donovan scored that goal against Algeria in the 2010 World Cup, the U.S. Soccer fan base has done nothing but grow. Along with that growth comes the addition of new fans who don’t completely understand what is going on, or the intricacies of the game.

That’s not to say that’s a problem at all. Everyone has to start somewhere and there is nothing wrong with new fans asking a bunch of questions to learn and understand the game. Many of these fans want to watch and enjoy the games, but don’t always know what to be looking for.

That’s where the media comes in, these fans will read as many articles about their team as they can, so they can have a better understanding. The danger to this is that it becomes very easy for the media to sway these fans’ minds.

This is where the USMNT beat writers have responsibility, and it’s where they’ve failed in general.

After losing the first two games of the Hexagonal round of CONCACAF World Cup qualifying, U.S. manager Jurgen Klinsmann was fired. Did he deserve to be fired? Maybe. But one of the biggest reasons he was fired was because the media and the fans, were shouting for his head.

A lot of the criticism that Klinsmann was given, or the reasons people were calling for his head, were unfair. How do I know that? Because those same media members are now praising new manager Bruce Arena for doing, or planning on doing, the exact same things that Klinsmann did! Let’s highlight a few of them.

The U.S.’s best formation is a 4-4-2 so what was Klinsmann thinking starting with a back three in a big game against Mexico?

Ah, the Mexico match. The match where the media, and the fans, decided that anything other than a 2-0 win against CONCACAF’s best team was suddenly a fireable offense.

Much was made of the fact that the US started the match with a back three, with many, including captain Michael Bradley, saying the US didn’t know how to play that formation even though Bradley had been playing that exact formation for the past six weeks with Toronto FC. The loss was blamed on the formation even though the U.S. conceded one goal on a crazy deflection and another because Jozy Altidore didn’t mark his man on a set piece.

Klinsmann started the game that way because the truth is, in theory, a 3-5-2 is the USMNT’s best formation. It would solve their left back issue with Fabian Johnson playing as a wing back and it would also enable to them to play Christian Pulisic in a central role while keeping Bradley and Jermaine Jones on the field.

Last week, Bruce Arena even acknowledged as much when he said he was considering using a back three for the next two matches. In November, Klinsmann was criticized. And now, Arena is being praised for the same idea.

Klinsmann plays too many players out of position

This was always my favorite one because every international manager does this, especially Bruce Arena. In a March 2016 qualifier in Guatemala, Klinsmann was lambasted for starting Geoff Cameron “out of position” at right back despite the fact that he played the entire 2013/14 and 2014/15 seasons in that position at Stoke.

When Bruce Arena announced his roster last week, there was one noticeable thing missing, a natural right back. Upon breaking down the roster, several of the same writers who killed Klinsmann for playing Cameron there a year ago suggested that Arena move Cameron to right back because the U.S. has greater depth at center back.

Not only is that claim hypocritical, but it’s also wildly inaccurate. At last summer’s Copa America we learned that the U.S.’ best center back pairing is Cameron and John Brooks and whatever the second best pairing is is a distant second. Just look at how lost John Brooks has been in games without Cameron.

Arena has said he wants to limit the amount of players playing out of position, which is fine but the bottom line is in international football, it’s a necessary evil. Playing Graham Zusi or Kellyn Acosta at right back may not put them in the best position to succeed individually but if it makes the team better, it has to be done.

When Arena took over, people thought that would bring changes to the team. While the bottom of the roster looks a little different, it’s clear that Arena’s plan is to rely on the same players Klinsmann did. He even wants to find a way to play Christian Pulisic in a central role, a move that he himself criticized Klinsmann for after the Mexico game. How interesting.

Bruce Arena planning to continue many of Klinsmann’s ideas suggests two things. The first is that maybe Klinsmann actually had the right idea and the second is that the media clearly had a vendetta against the guy. Maybe the media, at least those who differ in opinion from Klinsmann to Arena can use the opportunity to explain why Arena’s situation is different than Klinsmann’s. Not doing that raises red flags and does look hypocritical.

7 thoughts on “The U.S. Soccer media has become a bunch of hypocrites”