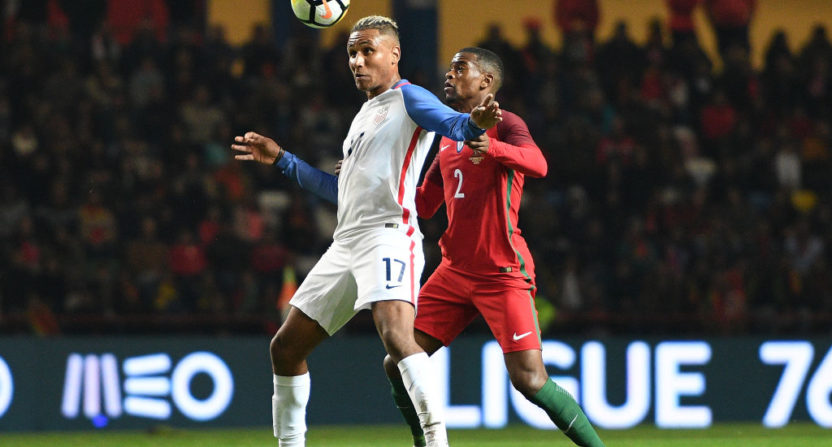 Since failing to qualify for the 2018 World Cup last month, a lot of the focus from the media has been on changing the mindset and priorities of U.S. Soccer (whether that’s what U.S. Soccer is actually focused on is a completely different story). Taking friendlies seriously and going for a win is certainly not a top priority, but it shouldn’t go overlooked either.

Only one criticism of today – let’s stop with the “results don’t really matter”. @FOXSoccer @AlexiLalas @stuholden -If we are going to develop as a soccer nation we also need to develop a winning mentality- in all competitions #newculture

Everyone knows the saying, “Even a blind squirrel finds a nut.” That statement definitely applies whenever Eric Wynalda opens his mouth, but that tweet right there is the nut.

Wynalda is right. We need to start winning friendlies. That doesn’t mean we need to play small nations to inflate our win total. What it means is that whomever we play, whether it’s Portugal, Mexico, Germany, Honduras or Ecuador, we should be going all out to win. If it doesn’t work, who cares? Because remember, the games don’t matter.

Following the 2014 World Cup, the U.S. played a lot of friendlies that fell in a very similar pattern. The US would score a goal in the first half, take their foot off the gas, concede a goal in the final 10 minutes and come away with a 1-1 draw.

After every one of those draws, we heard the same story. The result doesn’t matter, it’s about how the team played and when the games count things will change. But downplaying all these blown leads and poor results did something else. It created an aura of complacency. Guess what, the results didn’t change. The complacency continued right along into the 2015 Gold Cup and into World Cup Qualifying.

What is the purpose of an international friendly? Forgetting the fact that many US Soccer friendlies are just money grabs they do still serve a purpose. It’s not like in club soccer where your players are getting back into game-shape because the players are all already in the midst of their season or just finishing their season.

Ultimately, it boils down to three main purposes: gain familiarity within the team, prepare for an upcoming tournament and experiment with your roster – the last of which is really just a subset of the first two.

However, it’s the idea of experimenting with your roster that really hammers home the need to try and win your friendlies.

These days, most friendlies start slow, get a little interesting after 15 minutes, and lose all interest after halftime. At most, they’re played at about 80% effort.

What good does that do? What are you learning if the players aren’t trying?

In the past week, England played two high-profile friendlies against Germany and Brazil. Gareth Southgate used the games to help instill a new system with new players. There was just one problem, no one tried to win either game. They both ended 0-0. When England had the ball against Germany, the Germans sat back and let them have the ball. When the Germans had the ball, the English sat back and let them have it.

To say the match was boring would be an understatement. All that talent on the field and no one pushing forward and trying to win. What exactly is a manager learning from that? Is Jake Livermore really gaining international experience by making eight yard square passes to Eric Dier?

If you’re a manager, wouldn’t you want to see how your players react when your down a goal and pushing for an equalizer? Or what if the game is level, don’t you want to see who you can call on that will come off the bench and push for the winner? How do you learn any of that if both teams are just passing the ball around for the final 10 minutes?

When it comes to the FIFA rankings, we already know playing a friendly in general will hurt you, no matter the result. So what is the point in not going for the win? There’s a reason that Southampton will play differently at Stamford Bridge in an FA Cup match than they would in a Premier League game. In the Cup, a 6-0 loss is the same as a 1-0 loss, goal differential doesn’t matter. It’s the same thing in a friendly. The result doesn’t matter but that doesn’t mean you shouldn’t be trying for one!

I realize it takes two to tango. You need both teams to want to put on a show. The solution to that is simple. If one team comes out running full speed and fully committing to their challenges (I’m not saying they should be making dirty challenges or trying to hurt anyone), the other team will wake up and follow suit. Both teams will be going for the win and you’ll end up with a nice open game. That’s what every friendly should be like!

It’s understandable that right before a tournament teams and, most importantly, players don’t want to get injured. But if you’re just going to go through the motions in a friendly, what good is that doing for anyone?