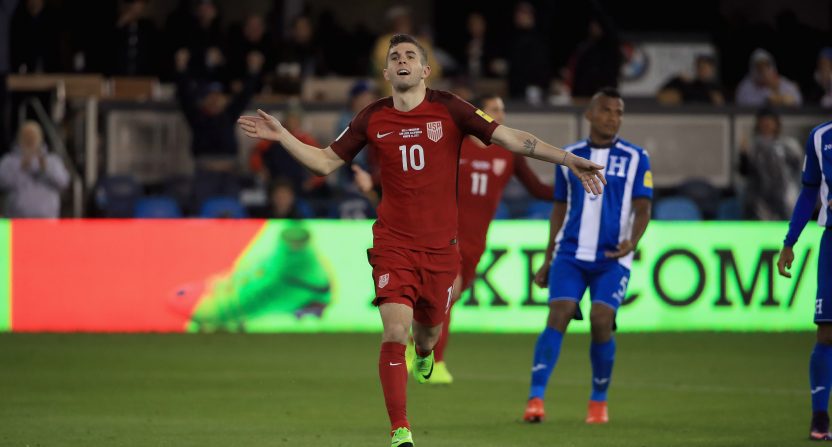 It’s never a bad thing when you can go on the road in CONCACAF and come home with a point. For that reason the US should be plenty happy about earning a 1-1 draw against Panama.

Prior to the two March World Cup qualifiers, manager Bruce Arena set out to claim four points from the two games. In that regard, it was mission accomplished, but if you’re an optimistic US fan it’s hard not to feel like the US dropped two points in Panama. This was, after all, a fixture that US won four years ago with a reserve team.

Obviously after watching the game, it’s hard to say the US were the better team and should have come away with three points. The problem is that this result was entirely predictable before the match even started, and that comes from one thing. After his coming out party Friday night where Christian Pulisic established himself as possibly the best player in the entire CONCACAF region, the US is already showing signs of developing an over-reliance on Pulisic.

During the Bob Bradley era, there were at times criticisms that the US had a tendency to simply sit back and wait for Landon Donovan, or Clint Dempsey, to do something magical to get them the win. Through the first two (competitive) games in the second Bruce Arena era, it’s fair to start being concerned about the team’s usage, or reliance on Pulisic.

Friday night against Honduras, the US deployed Pulisic in a central midfield role, giving him the freedom to roam around the field. This allowed Pulisic to be where he wanted to be, which allowed him to not only influence the game, but help make everyone else better.

Tuesday night against Panama, it was a completely different story. With Jermaine Jones returning from suspension, Arena opted to play a bit more defensively and re-insert Jones into the lineup, moving Pulisic out wide.

Pulisic wasn’t just asked to be a right winger though. While he was responsible for running up and down the wing, he was also tasked with cutting inside and serving as a no.10 underneath Jozy Altidore and Clint Dempsey (in theory converted right back Graham Zusi would push forward and provide the width on the right side). That’s a lot to put on someones plate, however for someone as good and as smart as Pulisic, it’s not too much for him to handle. Especially considering he plays various roles at Dortmund.

But that’s not how this played out. What happened was Jermaine Jones had a laugher of a game. He seemed to run around the field never knowing where he was supposed to be and never adding much of anything to the game. Up top, Jozy Altidore spent the entire game being nowhere near the action, even actively running away from the ball on several occasions.

The result of this meant that at times, Pulisic was forced to partner Bradley in central midfield, while at other times he was partnering Dempsey up top as the second striker. Suddenly two roles turned into four, and that is far too much for one player, let alone an 18-year-old, to handle.

While Bruce Arena didn’t plan on Pulisic having to cover for two of his veterans going AWOL in this game, the burden still falls on his shoulders because of how predictable it was that this would happen.

Seeing Altidore and Jones have poor games is nothing new. Altidore, who has scored just three career goals in away World Cup qualifying matches, has never been good outside the United States in CONCACAF matches. As we know, these matches tend to be physical affairs, and while Altidore is ironically a big physical player, he has never been successful against teams that play physically.

Altidore is also incapable of playing as a lone striker, which means if the US chooses to play him, they are essentially shoe-horned into playing a 4-4-2. That’s where Jones come in. Michael Bradley and Jermaine Jones have never been a successful pair in a 4-4-2 system. That was true when Bob Bradley was the manager, when Jurgen Klinsmann was the manager, and now when Bruce Arena is the manager. It’s almost as if when placed in this situation, the two bring out the worst in each other.

When Arena chose to start them together in a 4-4-2, it was obvious Jones was going to struggle. It almost seemed like Arena overthought and overcomplicated the whole situation. While Pulisic was often one of the furthest people forward he was also one of the first men back to defend.

The solution to this seems simple. If you want to play a 4-4-2, simply line Pulisic up next to Bradley. Pulisic has already shown both a willingness and an ability to defend, while also showing that that role allows him to influence the game the most.

If you insist on using him elsewhere, you run the risk on over-relying on him.