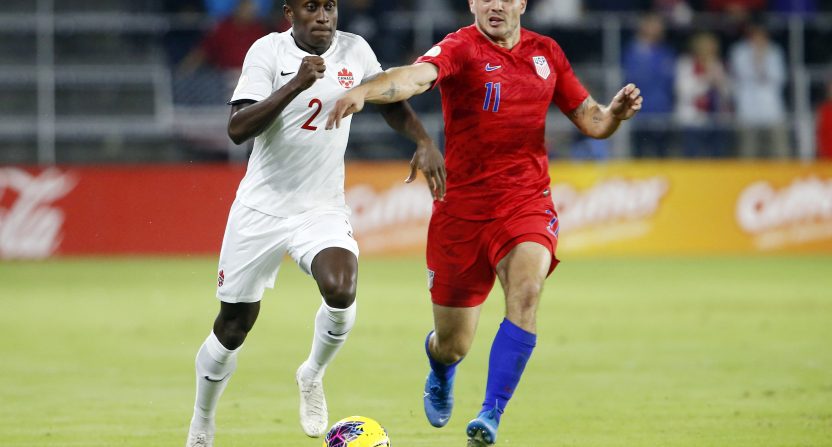 There hasn’t been much to cheer about the U.S. Men’s National Team. The players have routinely underperformed and head coach Gregg Berhalter is being shielded by his brother and former teammates than taking any sort of accountability on how the team has been playing.

That can be said about most nights but on this night, the USMNT actually played like the team they should be, in a 4-1 win against Canada in a must win Concacaf Nations League game. Many would point out that the United States shouldn’t have been in a must win position in the first place but the point is they won.

One big positive of the USMNT was that they blasted out of the blocks at full speed. They knew they needed to win and were going to try and take care of that as soon as possible. In the second minute, Sergiño Dest ran toward the lightly crossed corner kick and fell to the foot of Jordan Morris. Morris sliced the ball into the goal on a side volley.

USA’s second goal came around 20 minutes later. As the long range pass from Paul Arriola fell right to Morris, he crossed the ball to Gyasi Zardes who headed that ball into the back of the net to double the USMNT lead.

Just 10 minutes after that, Aaron Long got in on the scoring party to make it 3-0. A textbook free kick cross by Tim Ream and a textbook header by Long really made the play.

He rises high and nods it HOME!

Watch as @A_Lolo12 sends the #USMNT into halftime with a 3-0 lead. pic.twitter.com/XdG6JkAKkk

Canada tried to mount a comeback in the second half. A goal by Steven Vitória on a free kick made it 3-1 and Canada definitely looked strong but the United States did a great job killing the clock and a late Zardes goal sealed the deal.

It would be naive to believe this victory solves every issue plaguing the USMNT. The same issues are still there and no offense to Canada but if the United States expects to actually qualify for the 2022 World Cup, they should be able to defeat teams like Canada by three goals.

Having said that, there were positive takeaways from tonight’s game that the USMNT can hopefully apply for future games. For one thing, the team overall seemed looser and less rigid than previous games. They felt more comfortable and didn’t force anything and that translated to goals.

Why were the United States able to do that? I don’t know. It is interesting to note that Christian Pulisic isn’t on the squad this international break. Nothing against Pulisic, no one would argue that he isn’t the best USMNT player in the world. Maybe when Pulisic is playing, there’s pressure from the rest of the team to play the ball through Pulisic and that’s a lot to place on a 21-year-old. I’m not saying Pulisic shouldn’t be playing but it’s possible that the USMNT is somehow playing better when he isn’t on the squad and the team can spread the ball around instead of making him the sole focus.

With the win, the USMNT is now three points back of Canada in the Nations League. Because there’s only three teams in each group, Canada has played all their games. That means, the United States must defeat Cuba Tuesday and they will advance to the Nations League semis.

For Canada, not only does this mean they will likely miss out on the semis, they may miss out on qualifying for the Hex in World Cup qualifying. Due to changes in the qualification structure, it’s massively easier to qualify for the World Cup if you make the Hex so this may have kept Canada out of the World Cup as well.