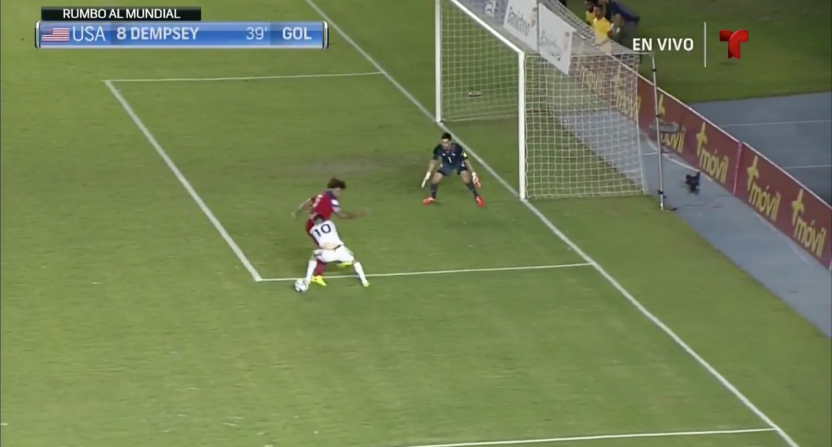 The formula in CONCACAF World Cup qualifiers is simple: win at home, draw on the road. Traveling to Central America and getting three points is no easy task, which is why the USMNT’s 1-1 draw in Panama on Tuesday night was a good thing overall.

Combined with three points at home against Honduras last week, four points in this international break was enough to put the U.S. back to where they started in terms of their statistical chances of qualifying for the 2018 World Cup.

#USMNT was at 83% to qualify before the Hex began, so nothing’s really happened in the past five months, right? https://t.co/PBvowborn3

It may not have been particularly exciting — especially for a late-night game on a weekday — but it did the job from a US perspective. When you think about it, the USMNT have four points from four games, and if somewhere around 15 points is threshold for reaching an automatic qualification spot, wins at home against Panama and Trinidad and Tobago plus a win in Trinidad would be enough to pull them close. Add on maybe one or two more victories and a draw or two and the US are looking at contending for second-place.

1-1 in Panama is pretty much always a fine result. Here are some more brief thoughts:

— Jones-Bradley in midfield still doesn’t work, believe it or not. Jurgen Klinsmann constantly insisted on playing Michael Bradley and Jermaine Jones together in midfield, and they never were in sync. Bruce Arena made his first obvious mistake as US manager and put them together against Panama, and it didn’t work.

In possession, Bradley would tend to drop all the way between the center backs to help facilitate the ball, which is fine, but when Jones would go renegading all over the field, a big gap would be left between them. So when Panama got possession of the ball, they would find tons of open space, which they would take advantage of because they’re a lot faster and more agile than Omar Gonzalez or Graham Zusi.

Arena seemed to recognize it as the second half progressed and eventually subbed on Kellyn Acosta for Jones, and that helped. For next time, though, Acosta should start next to Bradley.

Pulisic was ridiculous again against Panama. He continued to take defenders on, create chances, and overall be the US’s most talented soccer player, at age 18. He also singlehandedly created a goal for Clint Dempsey, which only added another crown to his throne atop American soccer.

The only problem I have with Pulisic (I know, I’m sorry) is that he makes too many sloppy turnovers in midfield, and sometimes can take too many touches without being able to keep possession. It is risk-reward, though, so sometimes he’ll take a lot of touches and turn it into something magical. He needs to learn how to consistently reap the rewards.

— The completely-depleted backline fared relatively well. The USMNT back four is absolutely decimated by injuries right now. Every position along the backline is deep into the depth chart.

At left back, Jorge Villafaña appears to have won the starting job, unless Arena wants Fabian Johnson to start there. That is the only position that *might* have seen its real starter actually play on Tuesday.

John Brooks and Geoff Cameron were both out due to various ailments, so that left Tim Ream and Omar Gonzalez as the starters at center back. Right back was going way, way down the depth: DeAndre Yedlin, Johnson, Eric Lichaj, Cameron, Michael Orozco, and Timmy Chandler were all not available due injuries or the fact that they were not called up. The recently converted midfielder Zusi was the starter in Panama.

It’s a fair bet that the goal would not have been conceded if Brooks had been in the game, and it would have finished in a 1-0 win for the USMNT.

Still, this wasn’t a bad result for the U.S. overall, and it’s one that has them in decent position going forward. We’ll see if they can capitalize on that.