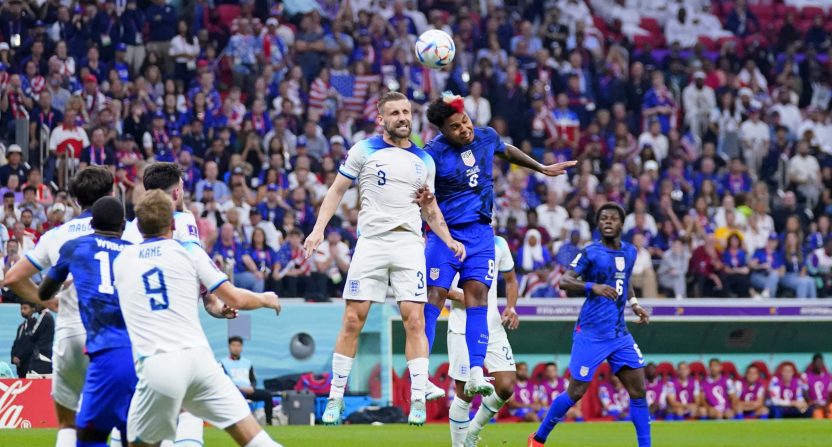 After drawing England Friday, the USMNT remains undefeated in the World Cup vs. the European giants. Despite the lack of goals, it was an entertaining 0-0 watch for fans of both sides. The Three Lions opened the game on the front foot, with a few good chances early before the Americans carved out several of their own.

Some U.S. fans lamented a missed opportunity to earn all three points, but most on the western side of the Atlantic seemed happy with the result. So much so that “USA Wins 0-0” was trending on Twitter shortly after the final whistle.

USA looked so much better than England in that game😂

Super weird. Because if you had told me before the game USA would tie England I’d have taken it in a heartbeat. But after that game I’m super annoyed at a tie. USA had their chances. Should have won.

On the other hand, England supporters were heavily disappointed with the draw.

That was terrible. Simply that. Retreated back into our boring shell just as we did in the Euros final after going ahead against Italy. Another constipated performance.
Hope dimmed.#ENGUSA

Terrible performance from England and from Southgate! Maguire has had as many touches in the USA box than Kane, 3! 😳

If USA can play through like this, imagine what a team like Spain could do to England. Not good at all.

Subs were a controversial topic for both sides. England left Phil Foden on the bench and the U.S. waited until the 83rd minute to bring on Giovanni Reyna.

Juventus midfielder Weston McKennie looked sharp, creating opportunities until he was subbed off late. He even found time to give fans a laugh when he wiped his hands off on a photographer’s vest before a throw-in.

McKennie using the photographer's bib to dry his hands before the throw-in 😅 pic.twitter.com/CyKQBzKaq6

Additionally for the U.S., its captain, Tyler Adams, continued to look impressive.

Meanwhile Tyler Adams superb for USA. Showing all the energy he brings to Jesse Marsch's Leeds team but minus the lack of discipline.

After Iran’s surprising win over Wales, the USMNT is in complete control of its destiny. Only a win versus Iran matters for the U.S. to ensure a knockout stage spot. A draw or loss will eliminate them.

Henry Bushnell of Yahoo Sports pointed out Iran can set up very defensively vs. the U.S. That being said, Iran must keep in mind that they can’t settle for a draw either, as a Wales win against England will leapfrog them over the USMNT and Iran to tie England for the group. Both matches air Tuesday, November 29 at 2 p.m. ET on Fox.

Impressive — and, in a way, equally frustrating.

180 minutes of mostly very good soccer, outplayed a World Cup favorite… and it'll all come down to the USMNT's ability to move a parked Iranian bus.