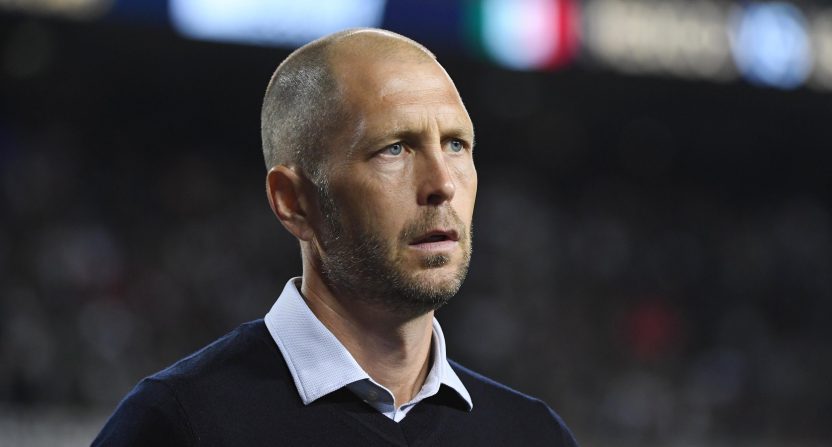 On March 26th, 2016, USMNT fans thought they had hit rock bottom. The United States had just suffered a 2-0 loss to Guatemala putting them in third place of their group in the semifinal round of World Cup qualifying. Losing to Guatemala was unacceptable. Some fans even thought the U.S. may not qualify for the World Cup. Fans started to call for Jurgen Klinsmann’s head.

The U.S. would be fine, for now. They advanced out of the semifinal round and even finished fourth at the Copa America, but Klinsmann never recovered. The U.S. suffered a lifeless 4-0 loss in Costa Rica eight months later and those that wanted Klinsmann gone finally got their wish. Rock bottom had sunk even lower.

The decision to fire Klinsmann and hire Bruce Arena was pragmatic. Arena would come in and right the ship, get the U.S. to the 2018 World Cup and then U.S. Soccer would find a long term successor. Of course that’s what would happen. The Hex is an ultra forgiving tournament that’s designed for the U.S. and Mexico to advance. There were eight games left, plenty of time to make up the points. Rock bottom had been hit, there was literally nowhere lower we could go.

Then came October 11th, 2017. We were wrong. The USMNT lost 2-1 to Trinidad & Tobago and failed to qualify for the World Cup. This was rock bottom.

Feels like yesterday…which is an indictment on what exactly?! pic.twitter.com/xSvRPVL907

There were no bright sides to the loss to T&T, but if there was one thing that was less dark it was that US Soccer would finally wake up and realize changes needed to be made. Arena was gone. Soon, President Sunil Gulati would follow him out the door. Perhaps the infighting would stop and US Soccer would grow stronger.

It’d be a stretch to say that losing to Canada in the CONCACAF Nations League is a new rock bottom considering what happened two years ago but what is it? What are we doing? The better question is, does anyone even care?

Two years removed from our “wake up call” the USMNT was played off the field by Canada, a team that as recently as four years ago was consistently not getting out of the group stage in the Gold Cup.

Losing to Guatemala was bad but at least that was on a crappy Central American pitch where weird CONCACAF’y things happen all the time. This was in Toronto, on the field that Michael Bradley has called home for the last five years.

Sometime back in June, before the New York Mets went on their insane winning streak to get back into the playoff race, a friend asked me how mad I was getting about the piling amount of bad losses. I responded that it had gotten to the point that I just don’t care. I love the Mets, they’re so much fun when they’re winning, but their owners are terrible. Management is terrible and until changes are made at the top level, failure on the field is only going to keep happening. It’s hard to keep caring.

I’m hardly the only Mets fan that feels this way. We still watch the games over the summer partially because there’s nothing else on TV, but also because we like to hear announcers Gary Cohen, Ron Darling, and Keith Hernandez. They’re fun. Even when the Mets lose, they’re really entertaining.

That’s where we are with U.S. Soccer right now.

2017 was supposed to be a wake up call. We needed to change. While U.S. Soccer publicly said just as much, none of their actions backed that up. In fact, every action they made seemed to distance fans from them more and more.

For all the talk of change, U.S. Soccer elected Gulati’s right hand man, Carlos Cordeiro, as their new president. They claimed they were undertaking an exhaustive search for a new head coach, only to land the guy everyone knew would be getting the job anyway, amid rumors that he was the only one considered for the job, and someone that would have taken the job a year earlier had it been offered then.

On the field, the U.S. played a year’s worth of lame duck friendlies with an interim coach. Did U.S. Soccer try to repair their crumbling relationship with the fans by making ticket prices affordable? Of course not, they continued to jack up the price for these games in search of a cash grab.

A year after failing to qualify for the World Cup, U.S. Soccer finally announced their new head coach, Gregg Berhalter. It was an underwhelming choice. Berhalter has only made matters worse with his roster decisions. He routinely passes over up and coming young Americans in Europe in favor of young Americans in MLS. He reinstated several senior players many fans didn’t think should ever wear the U.S. shirt again. He stubbornly keeps playing Gyasi Zardes thinking he can cut it at the international level. He insisted that Tyler Adams, the U.S.’s best midfield prospect since Bradley, should play at right back.

The results have been lackluster at best. The U.S. benefitted from an easy draw, and an odd bracket system, to reach the Gold Cup final last summer. But in their first test of the tournament, they failed miserably, losing to Mexico.

Berhalter’s system either doesn’t fit the players style, or has been too complicated to learn. Games have become incredibly boring. It’s almost a chore to watch them.

That brings us to last night. A CONCACAF Nations League game against Canada. There’s nothing sexy about that last sentence. I decided to “watch” it, but mainly because it was Ian Darke and Taylor Twellman on the call. The two have a great rapport together and would be entertaining. The same reason I still watch the Mets in June.

I wanted Gregg Berhalter to succeed, but he’s been with the team for a year now and it seems like we’re in the same place we were a year ago. It’s fair to ask if Berhalter is cut out for this job.

Can a change happen? Most likely not because who’s expected to be the new CEO of U.S. Soccer?

The man who will make the decision on Gregg Berhalter’s future as USMNT coach (Earnie Stewart) is very likely to soon report to … Jay Berhalter, Gregg’s brother. US Soccer, everybody.

U.S. Soccer has become another version of the Mets. The problems are with management at the top. Until things change at the top, the on-field product isn’t going to change. The fans understand that and will only become more and more apathetic, because if change isn’t going to come, why bother caring?