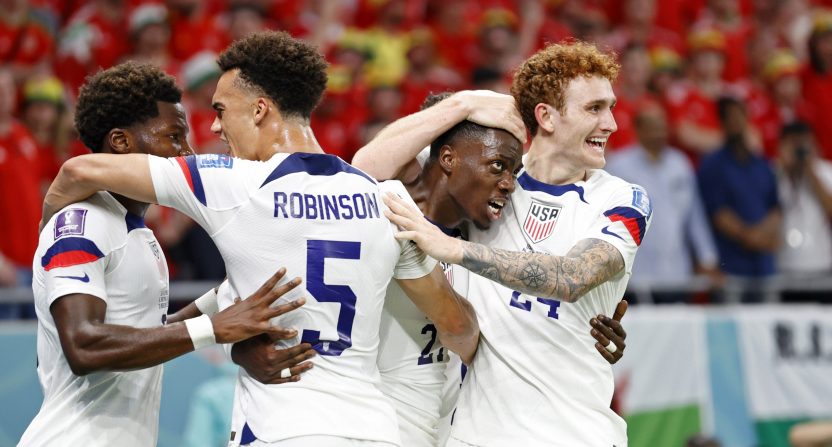 Wow, what an insane game earlier Friday to set up the United States match against England.

Following a 1-1 draw against Wales in its first World Cup game, anyone with a rooting interest in the USMNT had their eyes on the Iran vs. Wales game in the early hours on Friday.

After a red card to Wales goalkeeper Wayne Hennessey in the 87th minute, Iran was able to shock 10-man Wales 2-0 with two thrilling goals in the 98th and 101st minutes. Iran outplayed Wales and probably made some USMNT fans feel a little worse considering the Americans couldn’t beat the Welsh.

Regardless, it was one of two results — either a draw or Iran win — that the USMNT needed heading into the England game in order to control their own destiny in terms of advancing to the knockout stage. Though which result would have been best was hotly debated in the immediate aftermath of Iran’s win put them at three points and in second place for the time being.

Based on history and how the U.S. stacks up on paper against Iran, this was arguably the best-case scenario.

Regardless of how USA vs England goes, barring Wales beating England by multiple goals, the match vs Iran is essentially a round of 32 knockout match.

Beat them, and we’re through. That’s not a terrible spot to be in.

If Iran winning here ultimately means the U.S. gets knocked out, we'll have the new policy of massive added injury times to thank for it.

And another one… Death knell for Wales.

Iran victory means many things, including this: fate will be in #USMNT hands when they meet in a few days

Wales would have four points with a win and in complete control of one of two spots to get into the group, regardless of the USMNT result against England. Had Wales won, there would have been more pressure on the U.S. to get at least a draw against England. In that case, the U.S. would need to beat Iran and either England or Wales to win in order to be in on five points.

With a loss against England and a Wales win over Iran, the U.S. would essentially hope that an England team that had already clinched its spot in the knockout stage would be motivated enough to beat Wales. A draw there would have been enough for Wales to finish second in the group. If England were to beat Wales in that scenario, the USMNT would need a win over Iran and a better goal differential than Wales to advance.

Now that Iran has three points and Wales has just one, Wales has a must-win game against England and needs the USMNT to either lose or draw against Iran, or have a greater goal differential than the Americans. It essentially doesn’t matter what the USMNT does against England, though winning is always preferable.

If the USMNT can draw England and gain a point, a win against Iran guarantees the U.S. goes through to the knockout stage, regardless of the Wales-England game. Since 1998, when the World Cup field was expanded to 32 teams, no team has earned five points and missed out on the knockout round. But the U.S. doesn’t have to get a draw, and it now has all the incentive to go for it against England.

Three of 11 teams advanced in that scenario. And of the teams that ended up winning their final game to get to four points in that case, three of four teams advanced.

The USMNT should be fairly heavy favorites to win against Iran though who knows. The Iranians will be extremely motivated and confident after their win against Wales. But as was the case when the tournament started, the U.S. shouldn’t advance if they can’t beat Iran — or Wales.