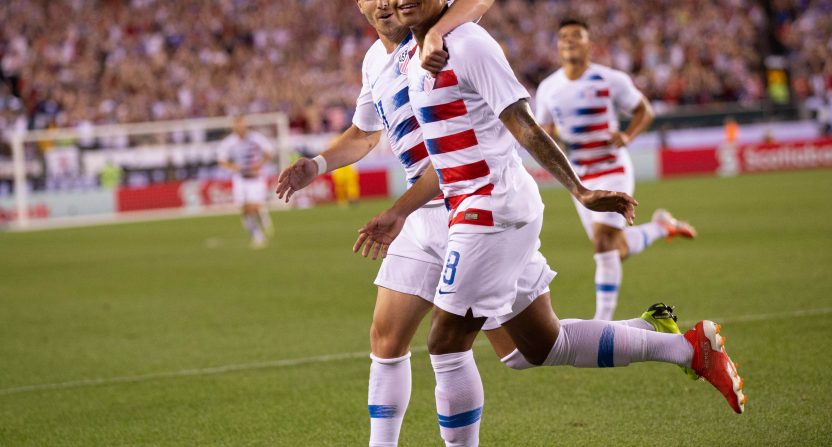 Stop me if you’ve heard this one before but the USMNT struggled against an inferior opponent they should have dominated but somehow escaped with a win they probably didn’t deserve.

This time, it was tiny Curaçao, a country with an area of 171 square miles (roughly the size of Philadelphia) and a population of 160,000 people, who faced the United States (a country that’s much larger in size and population) and at times looked like they were the better team.

In the end, the United States won 1-0 in the Concacaf Gold Cup quarterfinal and it continues their streak of not allowing a goal in the tournament. Problem is that it definitely did not inspire confidence for their semifinal against Jamaica.

Their lone goal came from the 20-year-old duo of Christian Pulisic and Weston McKennie. Pulisic cut back and floated a cross to McKennie on the far post, who headed the ball into the goal.

The two 20-year-olds connect to put USA on 🔝 #GoldCup2019 pic.twitter.com/cBWrhDZtT5

As the second half wore on, it was Curaçao who looked more likely to score. With the United States looking less and less likely to score, they went defensive (against 79th ranked team Curaçao) to protect their lead. I know that the only stat that’s worth anything is the score, and the USMNT got that, but it really says something when Curaçao outshot the United States 5-3 and out-possessed them 52-48.

Clearly, this is the kind of result that will allow fans to come up with different conclusions to fit their perspective. If you’re a cynical fan like myself, you’re not happy that the USMNT struggled this hard against a team they should’ve beaten by four or five goals. If you’re an optimistic fan, or Gregg Berhalter, you can point out that it’s still a 1-0 win, the USMNT hasn’t allowed a goal in the tournament, and ugly defensive wins like that is actually what wins trophies.

The issue is, while the USMNT can legit say they hold a 12-0 goal differential and have four wins in four games at the Gold Cup, and are progressing as they should, they’re not going to play teams like Curaçao all the time. The USMNT have Jamaica in the semifinal, and if they win that, it’s (very likely) Mexico in the final. The USMNT may be able to get away with an ugly 1-0 win against Curaçao but they won’t be able to play like they did and expect to defeat Jamaica or Mexico.