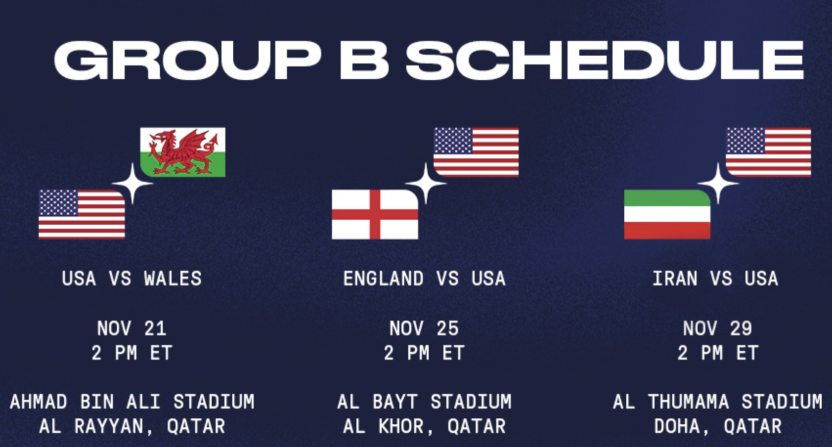 U.S. Soccer took a stance early Sunday in support of women’s rights in Iran amid ongoing protests in the country ahead of the U.S. Men’s National Team’s match against Iran at the World Cup in Qatar. But U.S. Soccer has backpedaled on its action and is expected to soon face a complaint from Iran.

In promoting its must-win match against Iran on Tuesday at 2 p.m. ET, U.S. Soccer removed the Islamic Republic emblem from the Iranian flag and the 22 inscriptions on the flag that says “God is Great” in Persian. The plain green, white and red flag representing Iran was on every official U.S. Soccer account, including the USMNT Twitter page.

The federation confirmed the action was intentional to support the women’s rights movement that has sprung up in the wake of the death of 22-year-old Mahsa Amini who died while in custody of Iranian security forces. The Iranian government has reportedly arrested thousands and killed hundreds in response to the protesters.

Later on Sunday, U.S. Soccer reinstated the emblem and justified doing so by saying it was a one-time action, per soccer journalist Grant Wahl. Now, U.S. Soccer has removed the posts entirely.

Iran's state-affiliated media is now saying the Iranian soccer federation will file a complaint with FIFA over US Soccer posting an Iranian flag without the Islamic Republic symbol as a show of support for women's rights in Iran. https://t.co/LAtANG4BcO

2) The Fed consulted experts on Iran before doing this, again as a show of support for protesters pushing for more equal treatment of women. 3) Neither Berhalter nor the players were consulted. (2/2)

Suffice it say, the Iranian authorities aren't pleased. According to AP, legal action is being threatened. @samstejskal also reporting that according to Iran state affiliated media, Iran plans to lodge protest with FIFA Ethics Committee. (4/x)

Despite this, Iranian state media reported that Iran plan to file a complaint to FIFA on the grounds of disrespecting the national flag and called for the expulsion of the USMNT from the World Cup.

The Tasnim News Agency cited Article 13 of FIFA’s Code of Ethics, which states “any person who offends the dignity or integrity of a country … shall be sanctioned with a suspension lasting at least 10 matches or a specific period.”

FIFA is also facing a claim of discrimination against Serbia, which had a banner that advocated for retaking Kosovo. So far, FIFA has not taken any action against the Iranian national team for staying silent during the national anthem. FIFA has also not said anything about the arrest of a former Iran national team player for his support of women’s rights and the protesters in Iran.

So far this tournament, FIFA has done anything it can to prevent criticism of host country Qatar. FIFA President Gianni Infantino explicitly stated European countries should stop being “hypocrites” and everyone should focus on the games rather than human rights and LGBTQ+ issues in Qatar.

When asked about Iran still being in the tournament despite its violent response to protesters and its support for Russia in its war against Ukraine, Infantino callously stated FIFA should host a tournament in Iran.

The current and historical political tensions between the U.S. and Iran were bound to entangle ahead of Tuesday’s huge match that the U.S. must win to move on to the knockout rounds. Time will tell if this conflict was the end of it between the two soccer federations.