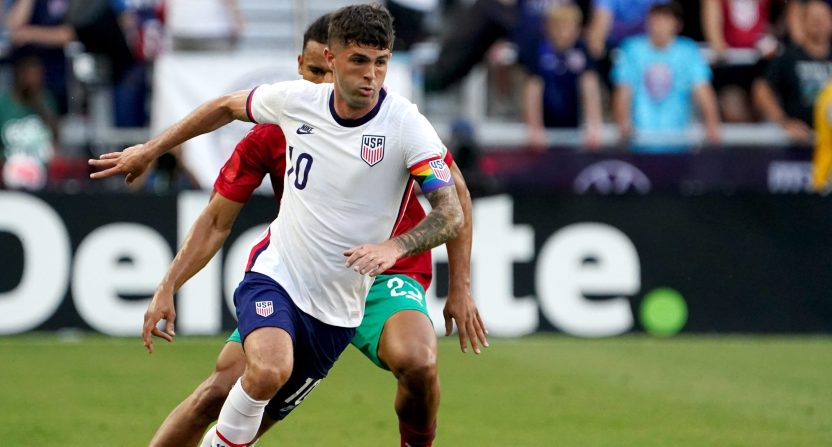 In September, the U.S. Men’s National Team played a pair of tune-up matches to prep for the 2022 FIFA World Cup. Both were at neutral sites and both were against Asian Football Confederation (AFC) teams also on their way to Qatar. The US lost to Japan 2-0 in Düsseldorf, Germany, and drew Saudi Arabia 0-0 in Murcia Spain.

Remember when the #USMNT loss to Japan and tie with Saudi Arabia caused full blown panic? 🤣

In case you don’t we pulled a few receipts.

What a dreadful performance by the #USMNT. Americans were completely outclassed by Japan, didn’t manage a single shot on goal. If they play like that in Qatar, the American men’s first World Cup trip in eight years will be a short one.

The @USMNT tie 0-0 against Saudi Arabia.

Things didn’t look good for the USMNT at the time. But, as we know, hindsight is 20/20 and those results don’t look so bad now, do they? Japan and Saudi Arabia have slain soccer giants on consecutive days in a remarkably similar way.

Argentina had the ball 69% of the time and fired off 15 shots – six on target – yet fell to Saudia Arabia on Tuesday. Germany were even more dominant, controlling 74% of the possession and generating 26 shots with nine finding the target, only to lose to Japan on Wednesday.

The USMNT didn’t exactly cover itself in glory in those September matches, managing just two shots on target combined. However, their opponents have proven to be much tougher than first thought.

Japan qualified for the World Cup easily, finishing 2nd in AFC Group B (behind Saudi Arabia). They drew Ecuador in their other September tuneup. The squad is littered with players competing in Europe’s top leagues, including seven in the Bundesliga. At least one guy that knew Japan was decent.

1. Losing to Japan is not a valid criticism in and of itself, nor a valid amplification of a criticism. Japan is good, and acting like the USMNT should stomp them is disingenuous at best and ignorant at worst.

On the other hand, everyone on Saudi Arabia’s team plays in the country’s domestic league. While they’re not tested on the same level week in and week out, they can boast familiarity that most other nations can’t. Eleven members play for Al-Hilal. Six are teammates at Al-Nassr and another three are at Al-Shabab. Many squads will only train together during international breaks but a team built this way clearly benefits from more frequent interaction.

Another factor in these upsets and ensuing reactions is the expectations. The soccer world is probably guilty of underrating teams like the Green Falcons that don’t send much talent to Europe. No doubt most pundits and fans spend more time watching major the Premier League and Serie A than they do the Saudi Professional League.

The truth is probably somewhere in the middle. Japan and Saudi Arabia won’t be world beaters every time out. The USMNT isn’t awful just because of losses to these teams. All we can do now is see what happens next time out for each team and recast our takes.