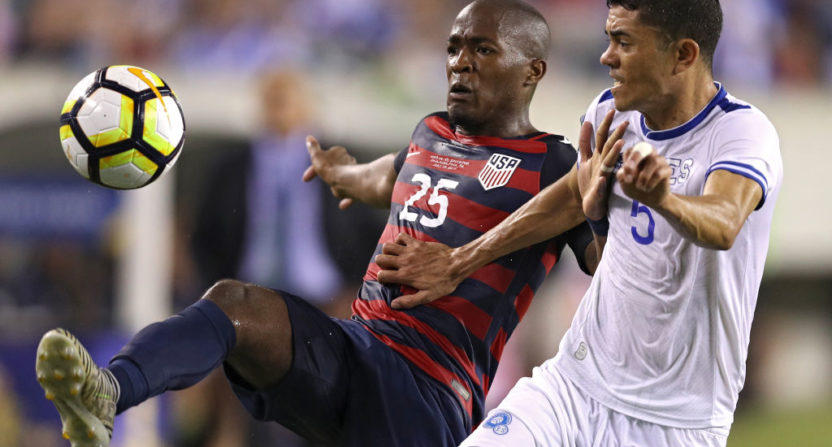 After a rough start, the U.S. Men’s National Team kicked things into top gear toward the end of the first half to defeat El Salvador 2-0 in the CONCACAF Gold Cup Quarterfinal in Philadelphia. Costa Rica defeated Panama 1-0 earlier off of an Anibal Godoy own goal and the two CONCACAF superpowers will face off in the Semifinal this Saturday at AT&T Stadium in Arlington, TX.

Things got off to a rocky start for the USMNT. Bruce Arena changed all 11 starters compared to their last game against Nicaragua. This included six new players to the team and five of them were starting. It was very much evident that the United States were slow off the starting block when Eric Lichaj overthought and didn’t get enough strength on his back pass to Tim Howard. That caused El Salvador to steal the ball and have a 1v1 chance on Howard but Howard bailed Lichaj out.

The first 10 minutes seemed to be mostly El Salvador as they had multiple chances on goal and quite honestly should’ve converted  at least a couple chances. It wasn’t until the 41st minute, where Michael Bradley sent in a knuckleball of a free kick right to Omar Gonzalez, who headed in his second goal in as many games.

Omar Gonzalez's 2nd goal of the tournament has the #USMNT up 1-0 on #SLV! @ModeloUSA #ModeloSoccer #GoldCup2017 https://t.co/RmMGb9sSDK

This was after a Gyasi Zardes goal was disallowed for being offside but the replay showed that he was onside and the goal should’ve counted. VAR, FIFA’s replay system designed to review and overturn obvious calls like offside, isn’t being used in the Gold Cup.

Then the USMNT rode the wave of the Gonzalez goal by scoring again about five minutes later. The defender, Lichaj, made up for his earlier gaffe and went five hole on Derby Carrillo to put the United States up 2-0 at halftime.

Just like in the first half, the first 10 minutes of the second half seemed to show El Salvador as the stronger team and had a couple chances where they should have scored. But it wasn’t to be as Howard and the U.S. kept things scoreless.

And then things got very personal in the 57th minute. As Bradley went to take a corner kick, Henry Romero took it upon himself to give a little unwanted foreplay to Jozy Altidore. Altidore had been kicked and tripped and fouled all game and given his strength, that’s nothing new. Romero, on the other hand, twisted Altidore’s nipple, which caused Altidore to react in a normal way one has when they have their nipple unwantedly twisted and confronted Romero. Romero, sensing contact, went down incredibly easy in a ploy to get Altidore sent off and it didn’t work.

Then, as if twisting a man’s nipple in the middle of a professional soccer game wasn’t enough, Romero then did his best Mike Tyson or Luis Suarez impersonation and bit Altidore in the shoulder, causing him to again react in a normal way.

In both instances, referee Drew Fischer didn’t do anything. His rather ineptitude of refereeing was a stain on the entire game and at times it seemed as though the players could have called their own fouls and have gotten more calls correct than Fischer. Romero didn’t receive a card and quite frankly, didn’t get much of a warning by Fischer for what he did.

It wasn’t seen on camera but Altidore wasn’t the only one who experienced a bit of teeth in his flesh. Omar Gonzalez said postgame that he was bit by an El Salvador player.

“One guy bit me, I was a bit shocked. But like I said, you just have to move on as quick as possible and look onto the next [game].” Gonzalez said. When asked who that player was, Gonzalez said he didn’t know who bit him.

Jozy Altidore wasn't the only #USMNT player to get bitten by a Salvadorian https://t.co/WskanVe3oI

Throughout it all, the USMNT held out for the 2-0 but after hearing manager Bruce Arena, you would have thought the United States lost.

“I thought we had a difficult time tonight,” Arena said. “Our timing wasn’t good, we didn’t deal well with the physicality. The game had no rhythm with all the fouls and players falling on the ground but we weren’t good on top of it.”

Arena did mention that after about 30 minutes, the team played more assertive and got things going but Arena was right, the U.S. was too slow to start. And while Arena didn’t say this, I felt the United States was lucky they weren’t playing from behind due to that slow start.

The final two Quarterfinal games will be played tomorrow in Glendale, Arizona. Jamaica faces Canada while Mexico play Honduras. The winners meet at the Rose Bowl in the Semifinal.