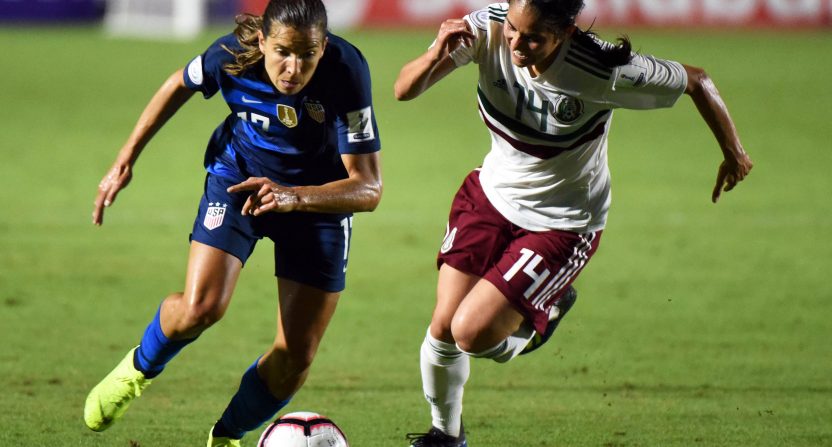 Women’s World Cup qualifying began in the CONCACAF region Thursday night and the U.S. Women’s National Team were ready from the get go. The rivalry between the women’s teams of Mexico and the United States isn’t as historic as the men but that doesn’t mean fans and the USWNT treat this as anything less. That showed with a 6-0 victory over their neighbors south of the border.

The USWNT was in control from the very beginning. Despite Mexico trying to clear the ball, they couldn’t. And the ball got to the foot of Megan Rapinoe who flicked it home for the first goal in just the third minute.

The USWNT finds the back of the net only 3 minutes into the match. pic.twitter.com/wjj2V6wSvJ

Things remained close as the USWNT entered halftime with a 1-0 lead. But as the second half started, the Americans scored early and often. Rapinoe had a hand in the second goal of the night, bringing a free kick into the box. After the header went off the crossbar, the ball moved around in the box until it got to Julie Ertz, who doubled the lead.

Julie Ertz makes it 2 for the USA! 🇺🇸 pic.twitter.com/GlgZnzFglv

A trend all game, Rapinoe got the assist for the third goal just ten minutes later. This time, Rapinoe took the corner and sent the ball to an open Alex Morgan who ran in and headed the shot in the goal for a 3-0 lead.

Alex Morgan scores her 91st goal for the USWNT and puts the game away. pic.twitter.com/h5RE7cGnoz

Tobin Heath got in on the scoring fun for 4-0. An awesome run by Crystal Dunn resulted in a cross to Heath, who sent the header in.

Tobin Heath makes it 4-0 for the home side. pic.twitter.com/CTrZu0WmCq

Rapinoe came back and got another goal to make it 5-0, capping off a stretch of three USWNT in a 13 minute span. At this point, the USWNT was just having too much fun against Mexico.

The USWNT forward scores her second goal of the match and makes it 5-0. pic.twitter.com/7AUIUQxUQZ

Finally, Alex Morgan scores her second of the night as the USWNT put an exclamation point on this game. A 6-0 victory over Mexico.

The goals keep on coming for the USWNT!

Qualification for the Women’s World Cup is a bit different than the men’s version. The USWNT do not have the Hex as the men do and instead have the CONCACAF Women’s Championship where they qualify from. Even though they are the defending World Cup winners and it may look easy, this can be pretty bad if the USWNT finds themselves in a rough patch or have injury issues.

This blowout win against Mexico at least provides me some confidence that the USWNT will qualify. They handedly defeated arguably the next best team in their group (along with Panama and Trinidad and Tobago) and finishing in the top two of the group will send them to the semifinals, where they will have their first chance at qualifying for the World Cup.

How that works is among the two groups of four teams, the top two go to the semis. The winners of those two semifinals qualify for the World Cup. They will also play in the final for the CONCACAF Championship but to many, making the World Cup is the bigger deal.

But anyway, the USWNT continues their qualification journey on Sunday against Panama and then on Wednesday against Trinidad and Tobago. If the USWNT (most likely) moves onto the semifinal, they can clinch qualification Sunday, October 14 while the final will be on the 17th.