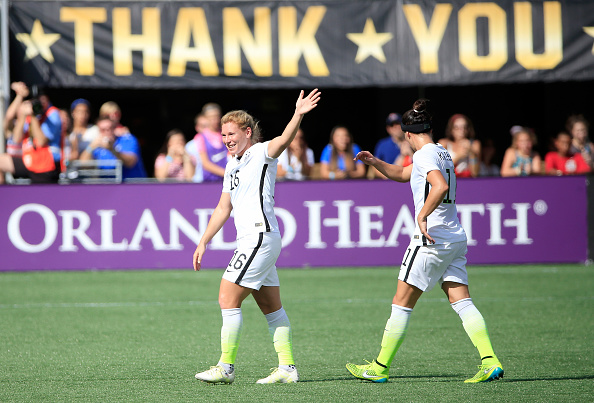 What should have been a national victory lap for the 2015 Women’s World Cup-winning United States Women’s national team has turned in to a nightmare. After protests and complaints over having to play World Cup matches on artificial turf, U.S. Soccer apparently didn’t get the memo about equality or quality of playing surfaces.

This weekend, the USWNT players refused to take the field for a scheduled friendly with Trinidad & Tobago in Hawaii. Star player Alex Morgan and head coach Jill Ellis took to the media to blast U.S. Soccer for the condition of Aloha Stadium.

Goalkeeper Hope Solo took to twitter to highlight the poor condition of the artificial turf at the stadium.

Our loyal fans: Thanks for standing with us against unsafe field conditions & standing tall for #equal treatment pic.twitter.com/abn560Kitw

It is a disappointing moment to say the least, especially after the success on the field and in the ratings for the USWNT’s run to the 2015 Women’s World Cup title. Following up on that with a successful, fun and most importantly, TV-ratings worthy “Victory Tour” would have allowed the women’s game sustained momentum in this country.

The general public have tuned in to the USWNT before, but it has been much like the Olympics, an every four year type of deal. It’s part of the reason why previous attempts to set up and sustain a women’s professional league have failed, but something felt different about what happened this past summer.

Attendance at NWSL matches sky-rocketed to record levels and women’s national team players were seen as stars in the sports-pop culture heavy media world as well. Even footing and even treatment of their celebrity status was and is happening.

It’s a shame that the same thing can’t be said of U.S. Soccer, and the evidence of the major rift between the players and federation could not be made more clear than the decision to cancel the game this weekend happened.

U.S. Soccer wasn’t the one releasing a statement with the players quoted about “being disappointed” and “wishing they could give fans the game they wanted to see.” Instead, the players took to a new source — the Players Tribune.

In part the statement read:

On Friday at practice, we lost a teammate, Megan Rapinoe, to an ACL injury. Megan’s injury took place while playing on a subpar training field. The grass on the training pitch itself was in bad shape. All along the pitch, sewer plates and plastic coverings were laying on the sidelines.

This decision wasn’t about “turf vs. grass.” This was about field conditions and player safety.

It wasn’t until we got to Aloha Stadium the next day — the day before the match against Trinidad and Tobago — that we finally saw, for the first time, how bad the stadium’s field truly was. The conditions were such that our coach shortened practice to a brief 30-minute training session so we wouldn’t risk injury before the game. There were sharp rocks ingrained all over the field. They were everywhere. The artificial turf was actually pulling up out of the ground, and the turf itself was both low-grade and aging. This was a playing surface that looked like it hadn’t been replaced in years.

There is a larger, more vital conversation about turf — as it concerns women’s soccer — that continues to make progress. But turf is our reality right now; we play on it all the time. This decision wasn’t about “turf vs. grass.” This was about field conditions and player safety.

It’s as simple as that. Soccer is our job. Our bodies are our jobs. And nothing should ever be put in competition with our protection and safety as players.

With all of that in view, we made our decision: These simply weren’t acceptable conditions for an international match.

The fact that the players took to their own source to release a statement shows just how frustrated they are in the treatment they are receiving from U.S. Soccer.

Eventually the USSF agreed with the players and agreed to cancel the game, but it brings up a larger point. Shouldn’t the federation have respected the international game enough to not have put their players in that situation to begin with?

Shouldn’t the USSF have listened to the near boycott of the Women’s World Cup over having to play on artificial turf fields and made a statement by playing the Victory Tour on natural grass fields?

It isn’t like they haven’t required stadiums with artificial turf to put natural grass down before, it just doesn’t usually happen for the USWNT. That point was made in a bold way through the statement on the Players Tribune.

And this was about wanting to protect women’s soccer players in general. We have become so accustomed to playing on whatever surface is put in front of us. But we need to realize that our protection — our safety — is priority No. 1. At the end of the day, we expect to be treated equally as our male counterparts. And we hope that, in the future, our fields and our venues will be chosen and inspected at the standard of an international match — whether it’s men or women playing on the field.

After a summer of progress and a real foothold for the women’s game here in the United States, this was a missed opportunity. Not only to grow the game in a place the USWNT has never been before, but to show the USSF sees the men and women on the same footing.

There is not a chance this game would’ve gone off on the men’s side without assurances and contracts stating natural grass would’ve been laid over the turf. Shouldn’t it also be time for the USSF to take a stand and make that a requirement of any future game played in this country?