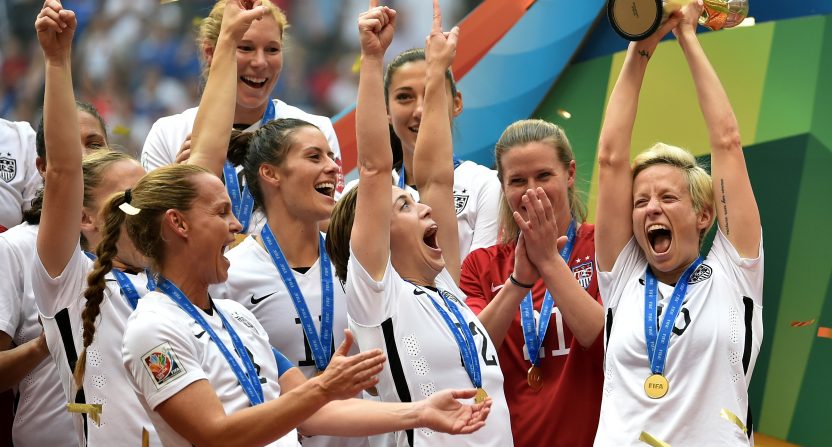 With just 181 days until the Women’s World Cup, FIFA had its draw for the tournament where 24 teams learned who they would be facing and where they would go throughout France. And now that the dust has settled, teams have about six months to prep for their group stage opponents and fans can figure out travel plans.

When it comes to the US Women’s National Team, they fared pretty well in their draw. The defending World Cup champs were drawn into Group F, which at 211 total miles of travel, gives them the lightest travel among all teams in the group stage. In addition, if they were to win the group and advance through the tournament, the USWNT can remain in northern France, with round of 16 and quarterfinal games in Paris and Rennes, all the way until the semifinal in Lyon. That light travel schedule will be big for them.

The USWNT’s opponents should also, for the most part, be beatable. Ninth ranked Sweden was once again drawn into the USWNT’s group, extending a wild streak in which USA and Sweden have been drawn into the same group for every Women’s World Cup since 1999. Joining them is 29th ranked Thailand and 38th ranked Chile, two teams vastly improving their women’s soccer program but are still probably another World Cup or two away from being contenders. This is Thailand’s second Women’s World Cup, after failing to get out of the group stage in 2015. Chile makes their Women’s World Cup debut.

There are other intriguing and entertaining groups in the Women’s World Cup. One group that looks a lot of fun will be Group D, which contains England, Scotland, Argentina and Japan. To England, this may look like a “group of death” with a former champ and two rivals in the same group. Each game should be highly competitive despite their ranking.

There isn’t an obvious “group of death” among the six groups. In addition to Group D, Group C with Australia (6), Brazil (10) and Italy (16) would make for the best argument. But compelling arguments could be made for Groups A, B and D. Pretty much any group who has three teams in the top 20 in FIFA rankings could make a case. But with a very forgiving group stage, where up to three teams can advance to the 16 team knockout stage, there’s a pretty good chance all competitive teams can advance.

But back to the USWNT, their road trip starts in Reims against Thailand on Tuesday, June 11. Then it’s a 143 mile trip to Paris to face Chile on Sunday, June 16. Finally, it’s the Sweden game in Le Havre, 197 miles away from Paris, on Thursday, June 20. If you are a USWNT fan traveling, you are in for a treat. Not only can you remain in the same part of France for most of the tournament, you can see the sites in Paris and visit the beaches of Normandy, the site of D-Day in World War II.

There is a concern that the knockout stage will be tough regardless of where they finish in the group. Most likely, the winner of USA/Sweden will win the group so if the USWNT wins, they go to Paris to face the runner up of Group E and not a third place team. Regardless of result, the USWNT is likely to face either Germany or France in the quarterfinal. But they’ll cross that bridge if or when they get there. Their first test is against Thailand.