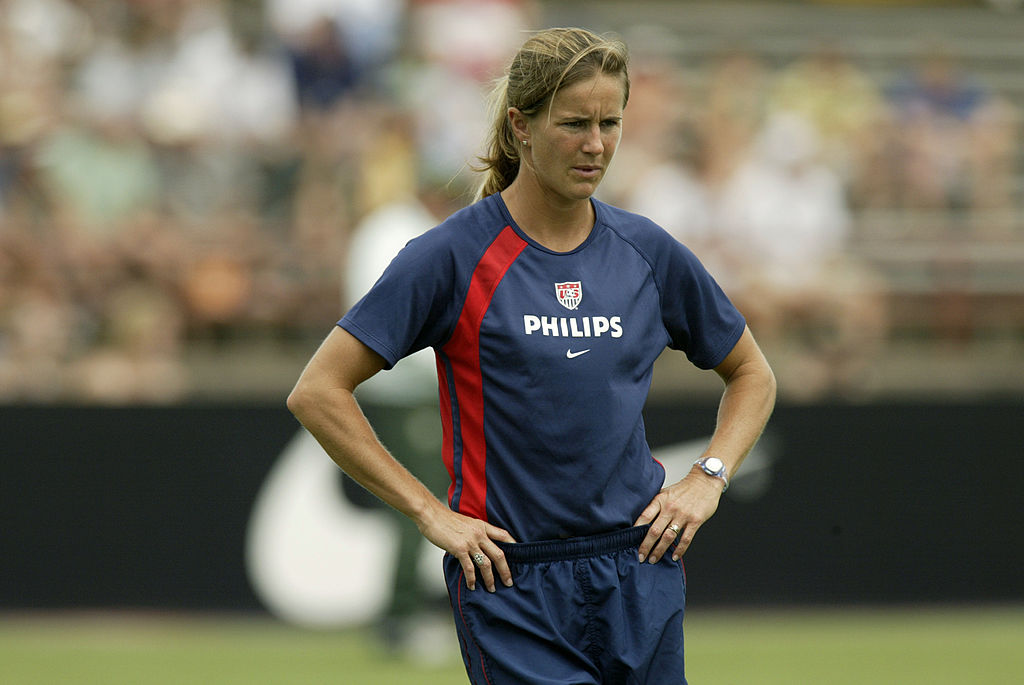 Brandi Chastain is a pioneering name in women’s sports, with her 1999 World Cup-winning celebration one of the most iconic pictures in sports history. She’s apparently looking to help make history again, this time in the research effort for C.T.E. — the much talked about degenerative brain disease.

According to a New York Times report, Chastain has pledged to donate her brain to the research efforts of the Concussion Legacy Foundation and Boston University. The group are considered pioneers in the research of chronic traumatic encephalopathy.

It’s an interesting move, as no women’s athlete has ever been diagnosed with C.T.E. but it has been found in the brains of women who have suffered severe head trauma in other ways.

However, most of the research efforts have been focused on men — especially those who play the most contact-heavy sports like football and hockey. According the NYT report, only seven out of 307 examined brains from this group have been women’s brains.

Chastain’s announcement certainly puts a large spotlight on the effort to make sure women are studied in a much more significant manner going forward. But, the question remains why Chastain?

Her answer lies in the pioneering spirit of that 1999 Women’s World Cup team and her own child.

“If there’s any information to be gleaned off the study of someone like myself, who has played soccer for 40 years, it feels like my responsibility — but not in a burdensome way,” Chaistain told the New York Times.

Her hope is also that the next generation has something to learn from the study of those athletes who came before the current generation. Consider it her longest-lasting legacy.

“They say, ‘Oh, you left a legacy for the next generation.’ This would be a more substantial legacy — something that could protect and save some kids, and to enhance and lift up soccer in a way that it hasn’t before. That was the impetus for saying yes. If we can learn something, we should. And I won’t need it.

For her part, Chastain believes she had experienced concussion-like symptoms at least a half-dozen times during her career. Still, she doesn’t believe getting rid of heading — at least at the adult level — is in the near future of soccer.

Instead, she believes that adults are better capable of understanding and executing the actions that make headers more safe than a 9-year-old or 11-year-old can. For her part, she practices what she is preaching by not teaching heading while coaching young players today.

Even if she never had a concussion, given the knowledge of concussions and C.T.E. today, Chastain can’t help but wonder if some things in her life today are affected by 40 years of playing the game of soccer.

“There are definitely days when I turn a corner and I’m like, ‘Why did I come into this room?’ I have definitely, from time to time, thought, ‘Hmmm, I wonder if this is connected to the past 40 years of playing sports.’ Soccer wasn’t the only thing I played. It’s crossed my mind. I do wonder about the ramifications over the next 20 years when I should be fully functioning and still doing things I like or want to do.”

While the next 20 years may seem far off, and the current status of research doesn’t indicate a current way to diagnose C.T.E. without death — Chastain’s donation to science may serve to help others step up to the plate and do the same.

Having access to the brains of athletes that pass now, could help to make the need for Chastain’s donation a moot point in 20 years time. It certainly would be the hope of every athlete out there today — young or old.