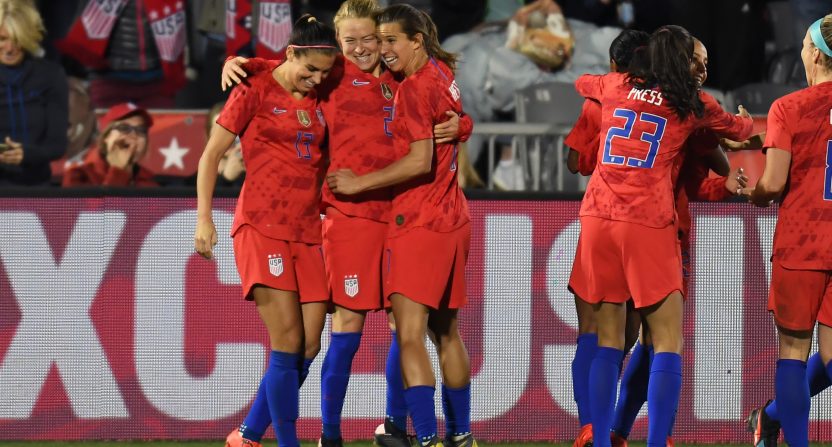 Just five weeks away from the FIFA Women’s World Cup, the 24 teams in the tournament are getting their squads ready for the big tournament. Before they set off on their pre-tournament friendlies and camps throughout France, each team is announcing their 23-woman squad for the World Cup.

There aren’t too many surprises with the list; many of the big names are going to France including Megan Rapinoe, Alex Morgan, Tobin Heath, and Carli Lloyd. In fact, 22 of 23 players were either on the roster for their friendly against Belgium or on the preliminary squad, so mostly everyone had been factored into Jill Ellis’ plans. Morgan Brian was last called up in January but had been injured.

The biggest omissions are probably defender Emily Fox and midfielder McCall Zerboni. A sophomore from the North Carolina Tar Heels, Fox is probably going to be one to watch for future Olympic and World Cup tournaments. Zerboni, the 32-year-old NWSL MVP finalist who has really come on strong for the North Carolina Courage, might have missed out on her one and only chance to be on the USWNT for the World Cup.

In total, someone from every NWSL team but the Houston Dash are represented on the USWNT squad. Houston had three players (Jane Campbell, Sofia Huerta and Kealia Ohai) who were recently on the roster but fell just short of making the team. Even so, Houston is likely to have players on other teams including Canada’s quartet of Allysha Chapman, Sophie Schmidt, Nichelle Prince, and Lindsay Agnew, as well as Rachel Daly from England and Clare Polkinghorne from Australia.

Here are the 23 players looking to successfully defend the World Cup for the United States:

The USWNT is set to play three friendlies throughout the United States in May. For their cross country tour, the USWNT will play fellow World Cup teams South Africa and New Zealand, as well as a final game against rival Mexico, who surprisingly failed to qualify for the World Cup.

The top-ranked United States is set to play ninth-ranked Sweden, 29th-ranked Thailand, and 38th-ranked Chile in Group F of the World Cup. While knockout stage qualification will be somewhat easy, their mettle will be tested after the group stage. If they are to win, the USWNT may face a tough Spain team, or potentially Germany as runners-up in Group B in the round of 16. After that would likely be a meeting against hosts France in Paris in the quarterfinal. Finishing runner-up in the group (likely to Sweden) would put them against the runner-up in Group E (which includes Canada) and a win would likely mean a quarterfinal matchup against Germany.

The USWNT won the World Cup four years ago and things have changed since. This is a more experienced team but this is an older team who now has some legit questions in certain positions, especially at goalkeeper. Not to mention, the other top teams have improved over the past four years and are improving at a more rapid pace than a USWNT squad that is already at the top. Just like in 2015, if the USWNT are to win the World Cup, they will have to earn it.