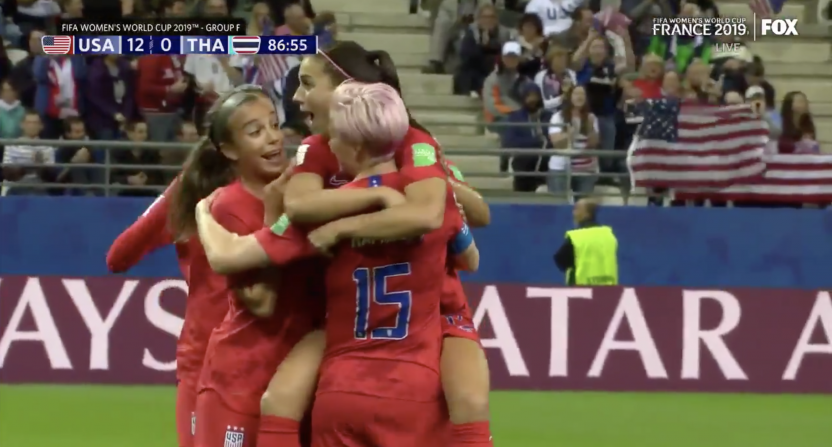 Everyone figured that the United States would defeat Thailand and defeat them by a wide margin at the FIFA Women’s World Cup. This is the United States Women’s National Team we’re talking about here, not the men. After taking an early lead, it became a competition to see how many goals could be scored and that resulted in a 13-0 victory for the USWNT.

Despite the almost certainty of a win, head coach Jill Ellis kept the majority of her expected XI to start against Thailand. Becky Sauerbrunn was left off for precautionary reasons due to a quad issue but she will be ready to play later in the tournament. One notable absence in the XI was Carli Lloyd, who was on the bench as she’s set to be more of a “super sub” this year.

Things went a bit slowly for the USWNT but after a disallowed goal for offside, Alex Morgan moved the USA into the lead in just the 13th minute with a header from a Kelley O’Hara cross.

This one counts! @AlexMorgan13 scores her 4th career #FIFAWWC goal to give the U.S. the early lead on a @Kelleymohara assist. 🇺🇸 pic.twitter.com/hiCgNcLYbr

It would only take seven minutes for USA to double their lead as Rose Lavelle chose to take the shot herself than pass wide to Megan Rapinoe and was rewarded for her effort.

YES WE WILL ACCEPT THIS ROSE! 🌹@roselavelle doubles the @USWNT lead with a sweet strike from distance 🇺🇸 pic.twitter.com/52BmByOjLw

Then came the trickery that came from USA’s set pieces. Personally, I would have gone conventional and not use up the element of surprise against an opponent like Thailand, but either way it’s a goal for Lindsey Horan to make it 3-0 with the USWNT averaging a goal every 11 minutes.

IT'S THREE! 🇺🇸🇺🇸🇺🇸@LindseyHoran pounces on the loose ball in the box off a Tobin Heath free kick. #FIFAWWC pic.twitter.com/73zdchSWeA

That might have been insurmountable and the United States could’ve taken their foot off the gas but since goal differential is a tiebreaker, running up the score is necessary. And in a six minute stretch, from the 50th to the 56th minute, the USWNT scored four times to make it 7-0 with two goals from Samantha Mewis and Morgan and Lavelle getting their second goal of the night.

The rout is on!

Alex Morgan’s 5th career #FIFAWWC goal gave the @USWNT a 5-0 lead on Thailand early in the 2nd half pic.twitter.com/idp7TgXoUB

DREAM DEBUT FOR MEWIS! @sammymewy scores her 2nd goal of her #FIFAWWC debut for the @USWNT's 6th. 😱 pic.twitter.com/WhTAhnD6pR

LAVELLE AGAIN!@roselavelle matches Sam Mewis with a brace of her own and it is SEVEN for the @USWNT 🇺🇸 pic.twitter.com/aAA9DH643v

Thailand got a few big saves to at least try and keep things from getting worse but Morgan came back to complete her hat trick to make it 8-0.

Goals 9 and 10 came within two minutes of each other as captain Rapinoe got her first of the night and Morgan her fourth to put the USA into double digits.

Come for the @mpinoe goal, stay for the celebration 😅 pic.twitter.com/DhF7Th17qj

Her 4th goal of the match makes it 1️⃣0️⃣ for USA 💪🇺🇸 pic.twitter.com/Pq9zwbbhR4

Once the USWNT got to double digits, they just kept scoring and scoring. Mallory Pugh got her first World Cup goal on her debut to make it 11-0 and Morgan came back for her fifth goal to break Germany’s record for most goals scored in a Women’s World Cup game.

The @USWNT ties the all-time record for biggest World Cup win as @malpugh gets in on the fun in her 1st #FIFAWWC game pic.twitter.com/C2NrVyH3L2

And on the end of stoppage time, the hat trick hero from the 2015 final, Carli Lloyd capped off a 13-0 victory with her first goal of the night.

NO MERCY! 😳@CarliLLoyd was not going to come up empty on a record-setting night for the @USWNT. pic.twitter.com/ifWl0kgYIn

I mean, what more can you say about this performance? Yes, it’s Thailand and everyone was expecting a blowout but we were thinking 5-0 or 6-0, not 13-0. And there were times where the USWNT could have been better. Despite the score, this wasn’t a perfect performance. Nevertheless, the United States will gladly take this result and play Chile on Sunday.