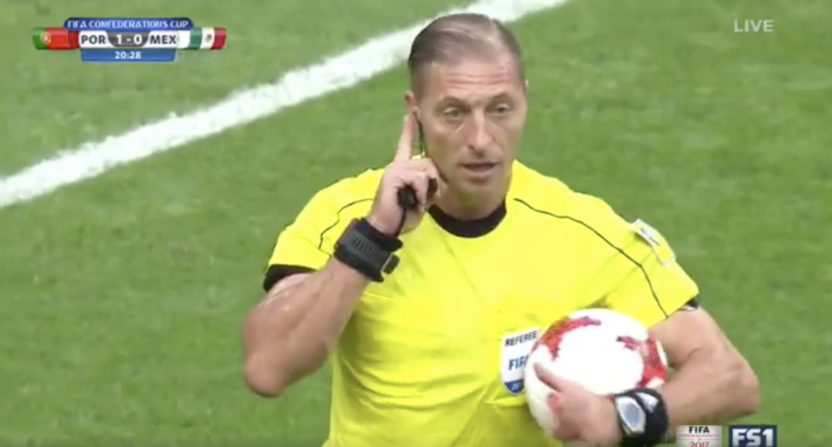 The FIFA Confederations Cup is meant as a test for hosts Russia as they prep to host next year’s World Cup. This year, it’s also meant to test out the new Video Assistant Refereeing system that is meant to overturn bad mistake calls from referees.

VAR has been in use at various times over the past year but mostly in testing and in junior tournaments which haven’t garnered much attention. Today was the first day that many in the soccer public got a look at how the system is implemented and like many new things, has some issues that need to be dealt with sooner rather than later.

The first VAR decision of the #ConfedCup denies Portugal the first goal of the match. @Powerade #PORMEX https://t.co/YCP2sb6zZy

The first example was during the Portugal-Mexico match. After a Cristiano Ronaldo volley belted the crossbar, André Gomes got to the end of the ball and Pepe scored as Gomes shot was going toward the goal. It was originally ruled a goal but the referee got a call in his headset from the VAR officials that the linesman may have been incorrect. Sure enough, after looking at the photo, you can clearly see multiple Portugal players (both Gomes and Pepe) offside, the call was correctly overturned and the entire situation lasted about 30 seconds.

The second, and more controversial example of VAR was during Cameroon-Chile.

In this situation, the referee took away a goal from Chile after Eduardo Vargas was later revealed to be offside (Vargas later scored and Chile won 2-0). Even with the replay, that is way too close to overturn. At the very least, people can reasonably believe Vargas was on or off and that is an issue.

An example like Cameroon-Chile is a reason why not everything is or should be reviewed. The reason why things like holding and pass interference isn’t called in football is that it’s such a judgment call that every referee has their own interpretation of the rule and call that loose or tight based on their interpretation. This is why reviewing handballs isn’t a good idea in soccer. Unless it’s a very clear handball like Luis Suarez at the 2010 World Cup that isn’t called, nearly every handball is subject to a judgment call based on the referee’s interpretation of what a handball is.

When it came to determining whether or not Edwardo Vargas was offside, when it gets that close, I wouldn’t be shocked nor wouldn’t blame the linesman if they were guessing at that point. It was such a bang-bang play and the linesman was seeing the pass start in his peripheral vision while watching Vargas’ position and had to make that call at full speed. The linesman could have ruled offside or onside and I would have said they made the right call because it was so close.

In a close situation like that, VAR shouldn’t be an option. Nitpicking on plays like that will slow the game down, will anger players, coaches and fans and give referees a crutch that they’ll get bailed out no matter what they call because of VAR. And when it comes to an offside play, the referee may be hesitant to whistle offside because if they whistle offside and is wrong, there’s no way to recreate a chance for that team who was wronged. If they keep play going, they’ll let that team take its shot and then just look at VAR to see if it should be offside. And if that’s the case, there’s not really a reason to have linemen at all.