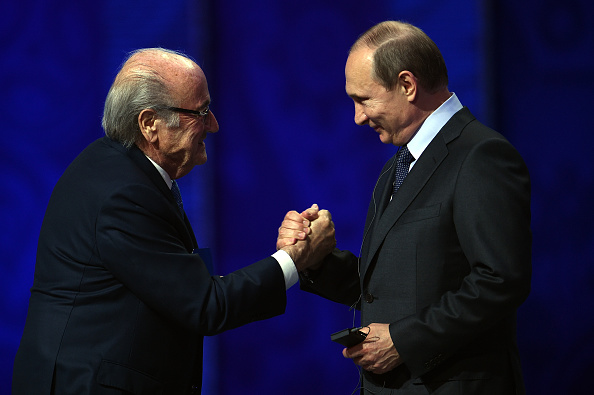 If anyone deserves a Nobel peace prize, suspended FIFA president Sepp Blatter does.

That is what Russian presdient Vladimir Putin said anyway. Putin’s comments were made on the same day FIFA’s ethics committee is scheduled to discuss the future of Blatter as he continues to serve a 90-day suspension after being accused of bribery. But you know, those are minor details, right?

“He’s a reputable person who has contributed greatly to the development of modern football,” the Russian president said during a press conference on Thursday. “He has always tried to use football not just as a sport but as a tool of fostering cooperation between people. He is the one that should get the Nobel peace prize.”

Yes, he actually said this of a man under fire for his handling and leadership of FIFA. Blatter, as you know, has been accused of overseeing financial mismanagement, has come under fire for the manner in which his organization handed the World Cup to Qatar for 2022 (and even Russia for 2018), and has been at the helm at a time when seemingly countless FIFA officials have been linked to accepting illegal payments. But hey, he must have a way with people, getting them to cooperate through these illegal measures within FIFA. That has to count for something, right? Give this man a Nobel peace prize!

The reaction of the man in the crowd at the 27-second mark as Putin is making his case is priceless.

Putin suggests Blatter be given the Nobel Peace prize lol

@MenInBlazers Putin says Blatter should get the Nobel Peace Prize. Is it just an elaborate attempt to get an EP credit on United Passions 2?

Sepp Blatter deserves a nobel prize as much as Putin himself deserves! Birds n flocks!

Putin is standing up for Blatter – he must be a good guy!

So #Putin reckons #trump is "very talented…absolute front runner" & #Blatter should get Nobel Peace Prize…dear god the world is scary!