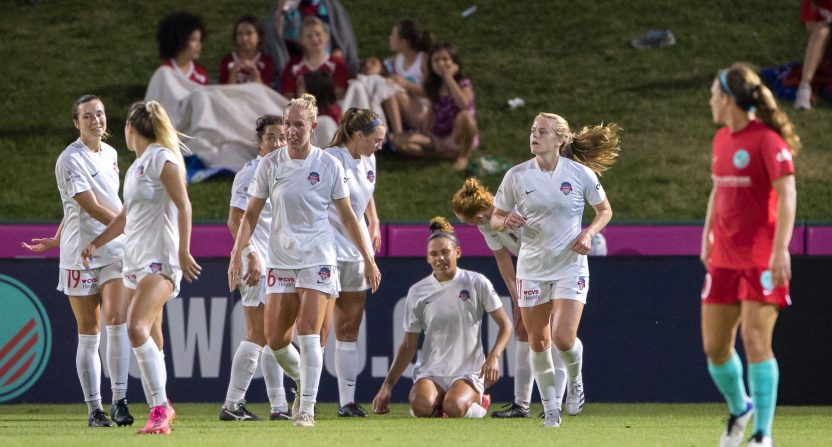 On Wednesday, The Washington Post’s Molly Hensley-Clancy reported on the “old boys’ culture” at National Women’s Soccer League (NWSL) club Washington Spirit and how a staggering number of female executives have left the organization in recent months. According to the report, 40 percent of the female staff listed on the team’s site in June have left as they have dealt with allegations by multiple women of a misogynistic culture that runs rampant.

The male Spirit executive, Larry Best, routinely joked that a Spirit player should be known as "Dumb Broad," according to multiple people who heard the nickname. He referred to a youth player as "J.G.," which he said stood for "Japanese Girl."https://t.co/RscTF0STY5

The list of female employees who have left the organization includes Lindsay Barenz, the President of Business Operations, and other high-profile executives.

I've got multiple sources confirming a pair of departures from the Washington Spirit's front office in the past few days:

Nicole Hawkins, a communications consultant for the club, and Bryana Wise, the Spirit's Senior Marketing and Sponsorship Coordinator, have both departed.

In August, Richie Burke was suspended as head coach after an investigation was launched into allegations of verbal and emotional abuse towards players. Amongst other things, Burke was said to make racially insensitive jokes and homophobic jokes that made players feel “very uncomfortable,” as well as that he was “unbelievably volatile.”

At the time, an initial statement from the Spirit said Burke had left due to health issues and that he had been reassigned to the team’s front office. The next day, the team released a second statement from co-owner Steve Baldwin, claiming it was the first time they became aware of allegations.

“On the heels of our announcement yesterday that Coach Burke was resigning, a Washington Post reporter contacted the Spirit with allegations of mistreatment — verbal and emotional abuse leveled at players — by Coach Burke,” read the statement. “We take these allegations very seriously and are undertaking an immediate investigation. Burke has been suspended pending the investigation and is prohibited from contacting players and staff and our facilities.”

With the new WaPo report, however, Spirit fans are not going to be appeased by tone-deaf or generic statements. Especially when the new report includes even more claims of abuse and misogyny inside the organization, which is supposed to be an example of support and growth for women’s soccer.

Spirit Squadron, a Washington Spirit fan group, has announced a protest and called for Baldwin to step down as owner and team president.

“We no longer have confidence that Steve Baldwin can effectively lead the Washington Spirit,” read the announcement. “Until new ownership publicly puts forth a plan that ensures a safe environment for players and staff, and commits to a true vetting process for hiring qualified employees at the highest levels, we will limit our game day activities. This includes the flying of flags, chants, and playing of drums in the supporters’ section.”

“We have seen enough, it is past time. Sell the team, Steve.”

It’s certainly not the first time that calls for Baldwin to resign have been made. Baldwin is actually one of a collection of co-owners of the club, including Y. Michele Kang, a prominent health information technology. Kang is said to be seeking a controlling share of the club from him since the abuse allegations first surfaced, and relations between them have soured. In fact, Baldwin recently made a major personnel move, hiring Ben Olsen as the new club president, without even consulting Kang.

This is a Steve Baldwin move, I'm told, and Michele Kang was kept in the dark.

Supporters and fans also took issue with Olsen’s hiring after he admitted “I don’t necessarily know the women’s game as much as many people in the soccer world,” pointing to it as a textbook kind of answer for many men who are hired over more qualified female candidates.

In the meantime, soccer fans and media members seem united in the effort to raise awareness of the allegations and get Baldwin out of the Spirit ownership group.

seeing the way how the NWSL is not handling the Washington Spirit problem is telling about what the league prioritizes. And from that, how do you care about women’s soccer, but not the women who play the soccer? 🤷‍♀️

If you care about the #NWSL and more importantly, if you care about NWSL players, you should stand with the Squadron and we should make #SellTheTeamSteve trend until this situation is rectified. Today would be a good day for that. https://t.co/XFtBtY7XiQ

How're you going to buy a women's sports team, talk a big game about inspiring and elevating women, and then treat the women in your employ this way? #SellTheTeamSteve https://t.co/r2giZ4oZ7e

As many have noted, it seems pretty strange that the NWSL, whom you’d presume has a very vested interest in empowering and centering women in its women’s soccer league, would stay silent on something like this. But so far, league commissioner Lisa Baird doesn’t seem to be all that interested in dealing with it.