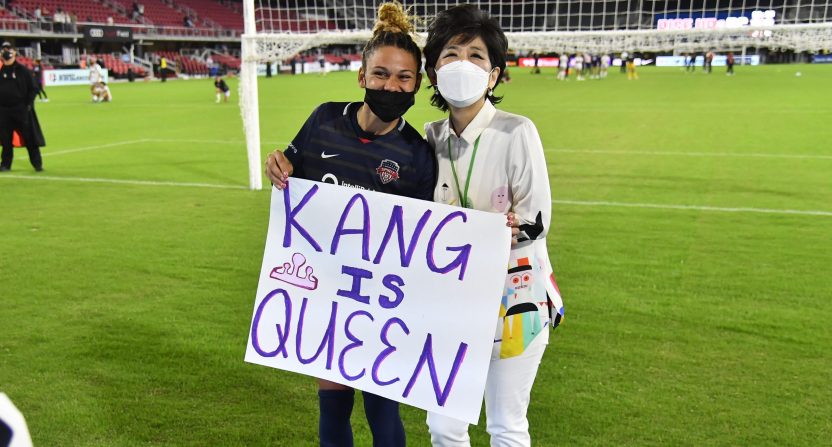 The NWSL’s Washington Spirit has been at the center of a wild saga for some time now and while we’re talking about a women’s soccer team the reason for all the headlines revolves around their male owner.

Back in August, Richie Burke was suspended as head coach after an investigation was launched into allegations of verbal and emotional abuse towards players. Amongst other things, Burke was said to make racially insensitive jokes and homophobic jokes that made players feel “very uncomfortable,” as well as that he was “unbelievably volatile.”

Then in September, the franchise made headlines when The Washington Post’s Molly Hensley-Clancy reported on the “old boys’ culture” that existed within the organization and how a staggering number of female executives have left in recent months. Per the report, 40 percent of the female staff listed on the team’s site in June had since left as the team has dealt with allegations by multiple women of a misogynistic culture that runs rampant.

All of which traces back to team co-owner Steve Baldwin, whose lack of accountability and efforts to create a positive environment for the team and its employees led many to push for him to sell the Spirit.

This wasn’t even the first time that calls for Baldwin to resign have been made.

Baldwin is actually one of a collection of co-owners of the club, including Y. Michele Kang, a prominent health information technology executive. Kang was said at the time to be seeking a controlling share of the club from him since the abuse allegations first surfaced. Rather than try to save face and sell the team, Baldwin dug in, even making a major personnel move, hiring Ben Olsen as the new club president, without consulting Kang.

In October, Baldwin stepped down as CEO and Managing Partner of the team but maintained controlling ownership of the franchise. The players of the Washington Spirit admonished him for not taking further responsibility for the allegations and workplace issues. They said in the letter that it would be their preference that he sell the team and give Kang controlling interest.

Fast-forward to January and Baldwin has decided to sell the Spirit, finally. However, he is reportedly close to finalizing a sale to Todd Boehly, part-owner of the Los Angeles Dodgers, Lakers, and Sparks, in an agreement that would shut Kang out of ownership. In an absurd reveal, Kang is also offering to buy a controlling interest in the Spirit and is offering $10 million more than Boehly is.

So Baldwin is essentially looking to spite-sell the Spirit to someone other than Kang.

Despite the call from many to sell control of the franchise to Kang, Baldwin remains undeterred. Even as the sale would be a move that would see the franchise be sold for less than market value, which would, in theory, hurt the entire NWSL. As WaPo notes, 17 team investors who support Kang wrote to Baldwin last month to say that a failure by him to sell to the higher bidder could result in a lawsuit.

Tuesday, the latest twist in the wild saga came out as, according to The Athletic, Kang has potentially gained the controlling interest of the team thanks to some nifty financial maneuvering with some of the other owners.

Eight of the Spirit’s debt-holders, who are part of a large group of smaller investors brought into the fold last year, have reportedly agreed to convert their debt to equity, which gives them the right to vote on club governance issues like, say, a potential sale. Those eight investors would reportedly side with Kang and give her the support needed to take control of the franchise. Between her own shares and the votes of the other investors, she would now have a 52% controlling interest.

As far as where it goes from here, we’ll see. Clearly, there are a lot of emotions and bitter feelings involved, which means things could still get ugly. But in the meantime, those who have been following along are seeing a lot of parallels between what’s been happing with the Spirit and the plot machination of HBO’s Succession.

The Roy kids could never! https://t.co/1vnQTju8fj

Michele Kang is the one person Logan Roy would be afraid of https://t.co/9V3TUXelFy

Succession, but make it Washington Spirit.

To be fair, there’s also another TV show that came to mind for some soccer fans as well…