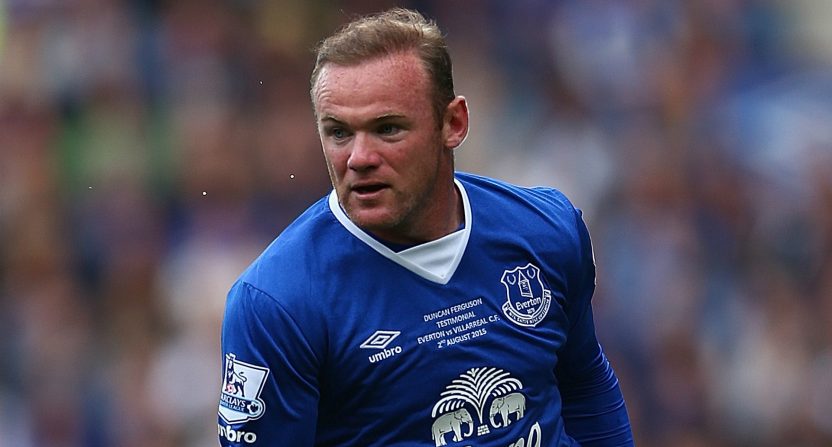 Wayne Rooney is 32, but perhaps the oldest 32 in soccer today. He’s played 610 matches for Everton, Manchester United, Everton again, and the senior English team, and he’s clearly been in decline for some time, though he did score ten goals last season for Everton in 31 league appearances.

Now he’s coming to America, joining D.C. United and instantly becoming the highest-paid player in franchise history. Via Steven Goff and Rick Maese of The Washington Post, who reported the long-rumored move was complete:

According to people close to the negotiations, United has finalized a package with Rooney, 32, on a 2 1/2-year guaranteed contract worth about $13 million. The organization has also agreed to purchase his rights from Premier League club Everton for an undisclosed transfer fee. United is awaiting only final paperwork to arrive from Everton.

The forward will become the highest-paid player in team history by a large margin and inject the team with a marquee name to appeal to the masses in a city with several larger-than-life sports heroes.

Rooney, the career scoring leader for both fabled Manchester United and the English national team, is scheduled to arrive in the Washington area on Thursday afternoon and begin training with his new teammates soon. He is not eligible to play until MLS’s transfer and trade window opens July 10, four days before the grand opening of Audi Field, United’s new venue in Southwest D.C.

He’ll be available for 20 league matches, including 15 at home.

When this move looked likely back in May, we wrote about why it didn’t seem like a great idea, and now that it’s definitely happening, the same general reasoning applies, just as it does every time MLS brings in a late-career name for more money than he’d get elsewhere in the world.

It’s pretty simple, really. If Rooney plays well, MLS looks like a league so bereft of talent that old-ass Wayne Rooney can come in and dominate. If Rooney plays poorly, then MLS looks dumb for touting a massive payment to a player who can’t, you know, play. There’s no real upside; there’s no more legitimacy to be gained for the league from players at Rooney’s stage of their career coming over. That’s been done time and again at this point, with names both foreign and domestic.

It’s a practice that probably should have been reexamined when Frank Lampard came over and tried to leave right away as soon as he realized he still had some life left. Rooney is a competitor, and the novelty of having him playing for a team like D.C. United is going to be worth some short-term ticket sales, and maybe even a boost in performance; D.C. is, after all, very bad; no team in MLS has fewer points than United’s 10, from 12 matches.

But it’s not a sign of the league’s growth, or strength. It’s a sign of the opposite, in fact; why should American soccer fans feel the same way about MLS bringing in big-name foreign players at the end of their careers they did when David Beckham came, which was eleven years ago? And while sure, there are more franchises and good attendance numbers and some passionate fanbases, there’s also a lack of success in regional competitions and a USMNT with a healthy number of MLS players failing to qualify for the World Cup.

It’s not an inherently bad thing Rooney is here. But it is bad that the narrative for these signings has only changed slightly over the last decade.