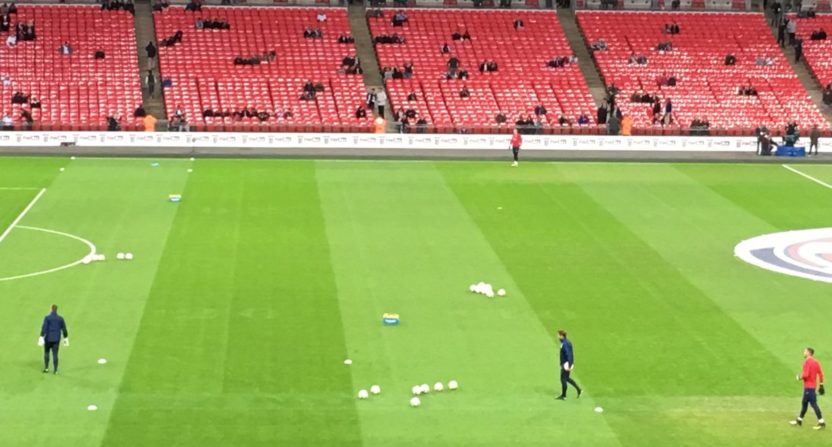 Last Sunday, the people of England got to see an uninspiring Dolphins team get dominated by the Saints 20-0. The NFL is trying to have a presence in Europe and England in particular and even has gone as far as investing in Tottenham’s new stadium (Tottenham plays at Wembley until their stadium is completed) so they can have a retractable pitch. One that is natural grass for soccer and one that is artificial for football.

Wembley Stadium probably wished they had a retractable pitch because the Saints and Dolphins really did a number on the pitch. Normally this wouldn’t be a problem but England is on the verge of qualifying for the 2018 World Cup and had their final home match against Slovenia at Wembley. This isn’t really a surprise that NFL teams would hurt the pitch, the ruts that are put between the hash marks as well as all the people standing on the sideline, it’s a reason why many NFL teams use artificial turf. Officials obviously knew this but somehow (translation: likely $$$) prevailed.

People were not pleased to see patches on the pitch as well as faded football lines on the Wembley pitch.

The scars of too much sport at Wembley? This is the pitch ahead of #ENGSLO pic.twitter.com/sP8GEmOzwb

NFL has taken its toll on Wembley pitch tonight. pic.twitter.com/Q9jIIEZO6j

Gareth Southgate compliments Wembley groundsman but tells @ianpaynesport that pitch is "not what it normally is" after Sunday's NFL #ENGSLO pic.twitter.com/OjgRSrpJzU

Pisses me off when they have nfl games at Wembley right before the qualifiers. Pitch looks fucking crap. #EnglandvsSlovenia

Good to see Wembley pitch looking like a farmers field, thanks American football ?

Wembley pitch is in bits after the nfl

Can still see NFL lines still on the Wembley pitch for an England game ??‍♂️ #EnglandvsSlovenia

Are those #NFL lines on Wembley pitch? #EuroQualifiers #blasphemy #ENGSLO

The pitch at Wembley is terrible! Rather bemused that they allow NFL matches to be played on that surface before an England game!

Football no longer 1st priority at Wembley, state of that of that pitch is embarrassing

and it’s Rashford up to the thirty yard line….what the hell have they done to that Wembley pitch?

That Wembley pitch is looking rough. Still some sideline and hash marks left. Thanks, NFL. pic.twitter.com/TRvLcyRADa

The pitch at Wembley is shocking #ENGSVN

That Wembley pitch is a disgrace @FA would rather the NFL cash, than have a pitch in good condition for the national team! #moneygrabbers

The Wembley pitch isn't the greatest. The price you pay for hosting NFL and Spurs, I guess. #ENGSVN

That Wembley pitch looks an absolute disgrace, that's what happens when you whore yourself off like the FA & English football do #ENGSLO pic.twitter.com/0icy111nsp

NFL markings still on the Wembley pitch? May as well be playing in fucking Wigan.

Im now SO bored watching @England that im now admiring the handy work of the @NFL pitch marks on the Wembley surface!!! pic.twitter.com/OqDKr4iXK7

While in a great spot to qualify, England hadn’t officially qualified before the Slovenia game and having an NFL game four days before your next to last qualifying match could provide issues. England struggled against Slovenia through the vast majority of the match and you could argue that the pitch conditions had a small part of that. Harry Kane scored a 94th minute goal to defeat Slovenia 1-0 and become the 10th team to qualify for the 2018 World Cup.

But despite qualifying, surely the FA wouldn’t have wanted to put anything to chance. Even if hosting NFL games at Wembley is about money, it would have cost them way more if England hadn’t qualified for the World Cup. And while the pitch conditions wouldn’t have been the actual reason why England didn’t qualify, it would’ve invited an easy excuse and wouldn’t have done anybody any favors.

If the FA really wants the NFL at Wembley bad enough, move your qualifiers elsewhere in England. I get Wembley is the national stadium and it’s tradition to play England matches at Wembley but there are plenty of suitable places with exquisite pitches who could fill in. We knew the qualifying schedule at least a year in advance so the FA knew they were scheduling an NFL game days before a qualifier. They’re just lucky everything worked out.