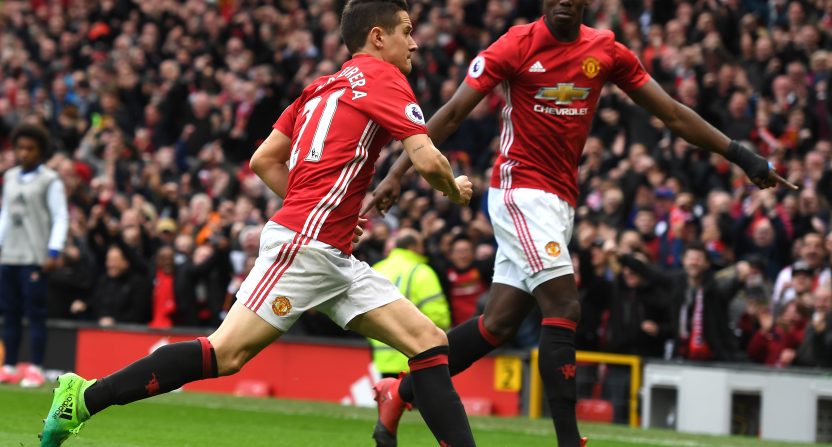 The stage was set. It was a Sunday afternoon in April. The grass had that late season shade of green, and for even the briefest of moments the rain stopped and sun shined down on Old Trafford. It was Manchester United vs Chelsea, two of the Premier League’s goliaths over the past 13 years and this year had the added caveat of a manager facing his former team. Even if you were sitting in front of your TV a continent away you could feel it, this was a big game.

Old Trafford has long been known as the “Theatre of Dreams” and for Manchester United, it was a raucous fortress. This season, Jose Mourinho has turned it into a literal theater. Each week, spectators file in and sit silently while they watch the performance that seems to always end the same way – with each team leaving with a point.

On Sunday, director Jose Mourinho changed around the cast members and called in a few understudies. The result was a different show, a better show. Manchester United put on what was by far their best performance of the season, holding Chelsea without a shot on target. It was a thrilling 2-0 win that fans should have been beaming about for days to come.

Instead, the reaction of many fans was simply, “meh.”

I’m not shy about letting people know that I am a huge Manchester United supporter. Whether it’s Chelsea or Sunderland, I don’t miss the match. In previous years, a home match against Chelsea in April, a fixture that literally decided the title race in 2010 and 2011, would have me excited for days leading up to it. I’d be on my couch an hour before the match watching every second of the build up.

But this year was different. This year, I had errands to run on Sunday morning. I figured I’d get up early and try to get them done, but if I missed the beginning of the match, oh well. I managed to get in on time, but when I fired a text to another United supporter after Marcus Rashford’s opener, I discovered he too had things to do and missed the beginning of the match.

Five years ago this would have never happened, so what’s different?

This is Jose Mourinho’s Manchester United and the truth is it’s not that good. The pundits and the former players may talk about the summer spending spree and how Mourinho has made the team watchable again.

Watchable and good are two different things, and United haven’t exactly been good this year. When you look past the superstars, the Paul Pogba’s, David de Gea’s and the Zlatan Ibrahimovic’s, or the players who one day might be superstars such as Marcus Rashford and Anthony Martial, you’re left with a squad full of very average players. And when you trot out average players week after week, it’s no surprise that the team has found itself in the very average position of 5th or 6th all season long.

There’s nothing wrong with having average players in the team. Jesse Lingard is the type of squad player you need to win a title. Ander Herrera’s work rate reminds me of the role Ji-Sung Park played for years, only Herrera has more attacking upside. But when Park played, his role allowed stars like Paul Scholes, Ryan Giggs, Cristiano Ronaldo, and Wayne Rooney (the young version) to shine. Herrera does it along side players like Ashley Young, Antonio Valencia, Marouane Fellaini, and Wayne Rooney (the old version). Completely average players who do completely average things.

Manchester United fans are tired of average. They’re tired of seeing Fellaini, who does nothing well except throw elbows, line up in midfield every week while Bastian Schweinsteiger and Morgan Schneiderlin – two players who were handcuffed and shackled under Louis van Gaal and never given a chance by Mourinho – shine for their new club. They’re tired of seeing their team draw 1-1 with every bottom half of the table team that walks into Old Trafford.

That is the crux of the matter. United are currently four points out of the top four but control their own destiny via a game in hand on Manchester City with the Manchester Derby remaining. Despite that and the Chelsea win, it’d be hard to find a United fan that truly believes United will actually carry this momentum and finish in the top four.

United have played 17 home games this season. They’ve drawn nine of them and won just seven. Their two remaining home fixtures are against Swansea and Crystal Palace. But with United more likely to draw a home game than win it, thinking they’ll take six points from those matches is a stretch for even the most optimistic fan.

That leaves the Europa League as United’s best option for qualifying for the Champions League. Jose Mourinho knows this and the fans know this. That’s why he rotated the squad against Chelsea and it’s why a league win just isn’t moving the needle anymore. It’s a sad reality but Jose Mourinho has turned the most exciting part of the season into something mundane.

It’s especially frustrating because the Chelsea win showed us that maybe it didn’t have to be this way. Maybe had Mourinho trusted his squad and rotated a bit throughout the season, they wouldn’t be in this hole. Marcus Rashford shined as the central striker against Chelsea. Had he been given more chances this season, not just for his sake but simply for the sake of resting 35 year old Zlatan Ibrahimovic, who despite his 28 goals has scored just twice at home in the league in 2017, to keep his legs just a bit fresher.

We don’t know how it could have played out. What we do know is that it’s too late to change the feelings this season. United fans have long accepted that their average team is playing for Europa League glory and with that, there’s only so much excitement a 2-0 win over Chelsea can drum up.