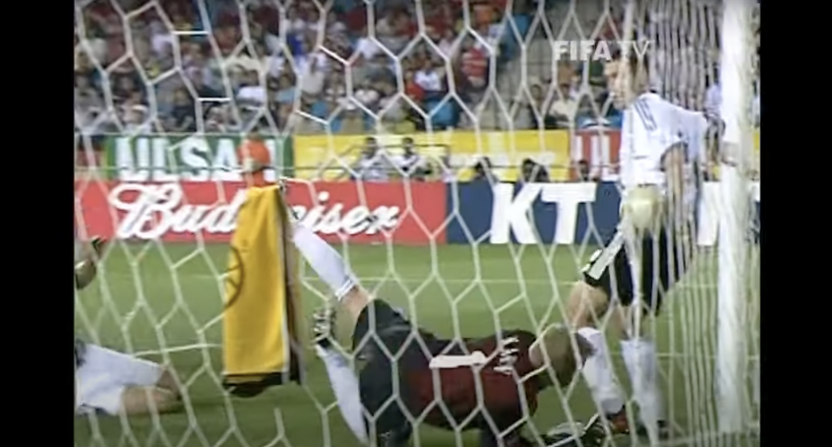 The “butterfly effect” is when even a small change could result in larger changes in the future. Sports are no exception to that phenomenon. There have been so many monumental, history-defining moments in sports but if some of those moments hadn’t happened or if their outcome had been different, our view of sports as we know it may be vastly different. “What if…” looks at some of these big moments and speculates on how that sport, or maybe sports in general, may look if the outcome had been different. This week, we take a look at what might have happened if the USMNT’s most successful showing at the World Cup wasn’t decided on a missed handball call. Future installments will be on Awful Announcing and The Comeback.

When the United States was selected to host the 1994 FIFA World Cup, many people were hesitant to award a country the hosting rights to a tournament that they hadn’t qualified for since 1950. U.S. Soccer getting the World Cup was done more as a means to introduce soccer to mainstream America and hopefully kickstart a soccer revolution in one of the biggest countries in the world. Nevertheless, there were concerns that the U.S. Men’s National Team would be embarrassed on the world stage, given they couldn’t even qualify.

Those fears were dashed. Just shortly after they found out they were hosting the 1994 World Cup, the USMNT qualified for the 1990 tournament. Looking to get some experience, the USMNT lost all three matches, even though they held strong against hosts Italy.

In 1994, home field advantage got the United States into the knockout stage, where they were knocked out in the round of 16 by eventual champions Brazil. In 1998, despite being ranked 11th in the world, it was a World Cup to forget- the USMNT only scored one goal and lost all three matches in France.

With 2002 on the horizon, the USMNT had a healthy mix of youth and experience, as well as domestic and international club players. Confidence was high, but what happened in 2002 was better than anyone could’ve hoped for, even though it could’ve been so much more.

With the tournament taking place in Asia for the first time ever, by that logic it was a wide open tournament. The USMNT entered their group against Poland, Portugal, and co-hosts South Korea. After a 3-2 win against Portugal and a 1-1 draw against South Korea, the USMNT were set to go on to the knockout stage despite a 3-1 loss to Poland.

In the Round of 16, the United States faced group winners Mexico for the first time at the World Cup. This was one of Mexico’s best squads and they had high hopes of their own, but it was the USMNT getting the 2-0 win and advancing to the quarters for the first and currently only time in their modern era.

In the quarterfinal against Germany, the Germans got out to a 1-0 lead thanks to a Michael Ballack header, but the USMNT was that team who just wouldn’t give up. They were stepping up against the European powerhouse and were getting great shots in. This wasn’t a Germany beatdown by any stretch; the United States was making it a game.

Then came the 50th minute when everything changed. Off a USMNT corner kick, a wayward German header sent the ball to a wide open Gregg Berhalter, who shot toward goal from a few yards away. After Oliver Kahn got just enough to alter the path of the ball, the goal bounced off midfielder Torsten Frings, who was defending on the post. Frings had his hands behind his back to prevent a potential handball, but the ball still bounced off his arm, and that kept the ball from going into the net.

The USMNT wanted a handball, and in 2021 it probably would’ve been a penalty; but this was 2002 and before VAR. The United States didn’t get a penalty and the Germans held on to win 1-0. Unfortunately, not too many people watched the game live, because due to the time difference, this game was played in the middle of the night in the United States. Even so, this remains the farthest the USMNT has gone in a World Cup since finishing third at the first World Cup in 1930.

With South Korea in the semis and the USMNT matching up well against them in the group, this match remains a “what might’ve been” among American soccer fans about how far this team could’ve actually gone at the World Cup.

What if the handball was called?

There’s no doubt that if the referee ruled a handball, it would’ve been a penalty and the USMNT could’ve equalized from that. Based on the 11 who were out there at the time, it’s a good bet that captain Claudio Reyna would’ve taken the shot.

Let’s assume Reyna converted the penalty, because if he hadn’t this hypothetical pondering isn’t nearly as entertaining. If Reyna scores, it’s suddenly 1-1 with just over 40 minutes left. That’s a lot of time for Germany to take the lead again, but there’s a potential twist to everything. There was a good chance Frings would’ve been sent off for the denial of a goal-scoring opportunity had the penalty been called. Maybe that penalty/red card punishment was overkill for what was truly an inadvertent handball and that possibly contributed to the no-call, but that would’ve given the USMNT an advantage.

It would be nice to say that if Berhalter had scored, or that Reyna had converted the penalty, the USMNT would mount a legendary comeback and advance to the semis, but that would’ve been a tall order even if they were up a man. It wouldn’t have been impossible for Germany to score while a man down or keep the lead throughout extra time and have it go to penalties. Maybe this is just me trying to make myself feel better that the USMNT was destined to lose in the quarters, but in my mind, I saw Germany holding on and escaping in penalties. At the very least, it probably would’ve been a 50/50 coin flip.

Soccer is great, and nerve-racking, because it’s a game of inches and one small change can alter everything. Berhalter may have been inches short of scoring, in spite of Frings’ hand, but Miroslav Klose hit the post near the end of the first half before the Frings handball ever happened. We’re talking about the United States coming inches away from equalizing, when Germany was inches away from leading 2-0 and all but put the match out of reach anyway.

That swing of potential events resulted in so many legacies being altered. What would’ve happened to soccer in this country had the USMNT gone to the semis or even the final? We keep picturing the men winning the World Cup as this distant mirage that might never happen in our lifetimes, but it came closer to happening than we realized and it happened 19 years ago.

Yes, they have a long way to go after failing to qualify in 2018 and no one is making them a favorite, but given 2022 will be the first World Cup in the Middle East and will take place in the winter, maybe there’s a chance the USMNT could defy the odds. This time, they’ll have VAR to possibly make things right.