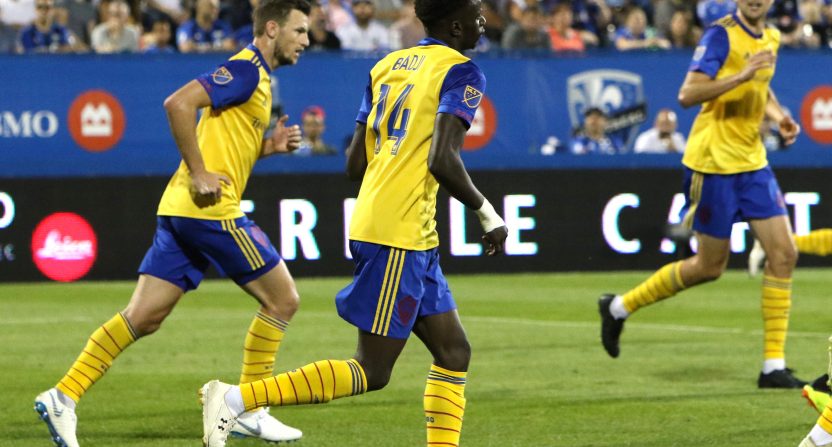 Before the start of the 2018 MLS season, the Colorado Rapids met Toronto FC in a two-leg Concacaf Champions League round of 16 series. The continental stage was a reward for the Rapids’ long-ago success in 2016, in which they qualified for the CCL by finishing runner-up for the Supporters’ Shield.

2017, of course, was less kind to them. They plummeted to second-to-last in MLS, ahead of only the LA Galaxy. Longtime coach Pablo Mastroeni got the hook in August, partially for his failure to generate any sort of attacking wherewithal; the Rapids scored just 31 goals, without a single double-digit scorer. Golden Boot winner Nemanja Nikolic scored 24 on his own.

With Anthony Hudson hired after the 2017 season to oversee a rebuild, and possibly coax Colorado out of the Mastroeni-induced sit-deep-and-counter ethos, there was briefly hope for longer-term success. Maybe, just maybe, the Rapids would quit dumping money on aging, lower-tier European attackers and defenders from the UK.

Sporting Director Padraig Smith soliloquized the day after Mastroeni was fired about the so-called “Rapids Way” in an op-ed for the Denver Post. He espoused the benefits of “attack-minded” and “bolder” soccer, saying they would target players “whose first instinct is to drive forward.”

His premise was moving on from simply “being well-organized, difficult to break down, and good at grinding out results.” Apparently, he wanted to move into the modern era.

Hudson, it seemed, shared his beliefs. The former New Zealand manager made clear from the beginning that he would play a three-at-the-back formation, a tactic used by TFC in their treble-winning 2017 season and that has become popular again worldwide. Fittingly, he loaned in US-international Edgar Castillo to play wing-back in his 3-5-2.

31-year-old Swede Johan Blomberg also joined, presumably as the go-to attacking option. Smith said in the press release that “Johan fits into the way we want to play … He is a versatile, forward-thinking player who possesses the creativity and game intelligence to make an impact in this league.”

All of that led up to the February 20 first leg against TFC in Colorado. Hudson put out a 3-5-2, as expected, but shuttered Blomberg to the bench in favor of Enzo Perez. The Rapids bunkered in that game, hoping to grind out a home result against the reigning champs. They looked organized for stretches, but lost 2-0 on goals from Sebastian Giovinco and Jonathan Osorio.

For some curious reason, Hudson neglected to make a single substitution despite going down on a crucial away goal 10 minutes into the second half. He relied on McBean and Dominique Badji up top, declining to even give his wing-backs (Castillo and Marlon Hairston) any significant freedom to advance forward.

They went to Toronto in the second leg, did the exact same thing, and drew 0-0, quietly and expectedly bowing out to the TFC machine. No one expected the Rapids to challenge the Reds, but sitting as deep as they did at home and then not going for a comeback in the second leg at all was curious.

Every concern feared in February — that they hadn’t acquired enough talent, that they would fall back into their reactionary, negative ways — proved true. They are now sitting on 15 points from 18 games, second to last in MLS on points per game, and have generally looked like a disaster. Not much is going right in Rapids-land.

Hudson has stuck to his three-at-the-back philosophy, although five-plus-at-the-back is more accurate. Blomberg has logged 900 minutes, not bad (not great, but not bad) considering the Rapids historical propensity for benching older attackers they way overpaid for — DP Shkelzen Gashi, for example, has started just three times this season. Blomberg has a disappointing own goal and three assists.

Price’s role is summed up by his league-leading eight yellow cards (the Rapids have a ridiculous 56 cautions as a team, leading MLS by 15). The hard-tackling Englishman is a capable defender, thankfully for the Rapids’ unathletic set of central defenders.

Price’s distribution, though, is not good. He leads the Rapids with a touch percentage of 12.9, meaning he’s on the ball a lot, but he has a passing percentage of 76.2 percent, well below league average. Most tellingly, the average distance on Price’s passes is 25.2 yards, the highest of any MLS midfielder that has played at least 500 minutes (American Soccer Analysis).

The man is an outlier: 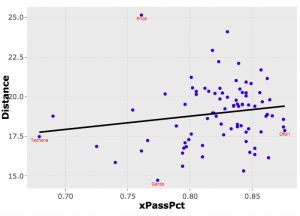 That graph, comprised of MLS midfielders who’ve played 500+ minutes, shows a player’s Expected Pass Percentage, the percentage of passes a player would be expected to complete, correlated with a player’s average passing distance. There isn’t much of a correlation between the two, except for Price. (Credit to ASA for the graph.)

Price’s xPassPct is almost identical to his actual pass percentage, showing that he tries low-percentage passes and not necessarily that he is a bad passer. Wilfried Zahibo, playing in a fairly similar deep-lying role for the New England Revolution, is the only player in MLS that comes anywhere close on the above graph.

The Rapids play a lot of long balls. Sometimes, they don’t even do that. In a recent loss to the Montreal Impact, in which they started five players who could reasonably be considered center backs, they did nothing other than hang out at the top of their own 18-yard-box and hit clearances. They managed a set piece goal, a Badji tap-in from a rebound, and literally no other shots. They lost 2-1.

This is the passing map of their attacking players against Montreal: 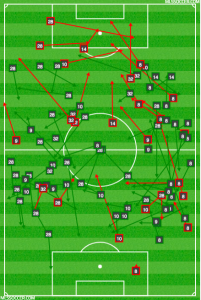 They signed forward Yannick Boli recently. He started against the Impact and didn’t do much. McBean isn’t a good passer and doesn’t have the physical tools to be an attacking difference-maker. Poor Badji, the Rapids leading scorer by far, and Castillo, who has been good, being by themselves.

Mason was recently waived, a searing indictment of Colorado’s offseason retooling. The decision to cut their losses on Mason could be the first step toward admitting “The Rapids Way” was an epic failure. Then again, they recently signed former overpaid MLS forward Giles Barnes, so things aren’t looking great in that regard.

A path forward does not immediately reveal itself. Talent is severely lacking on that squad. There are few, if any, building blocks. They aren’t developing young players to any significant degree, they don’t draft well at all, and it’s hard to pinpoint a single starting-caliber MLS player on that team. Even Tim Howard is nothing but a salary cap albatross at this point.

They have a ways to go. But MLS provides leeway for bad teams — through allocation money and other mechanisms, it’s easier in this league to improve quickly than many others. That should provide hope for the Rapids, though they’re not going anywhere if they maintain their current decision-making habits.