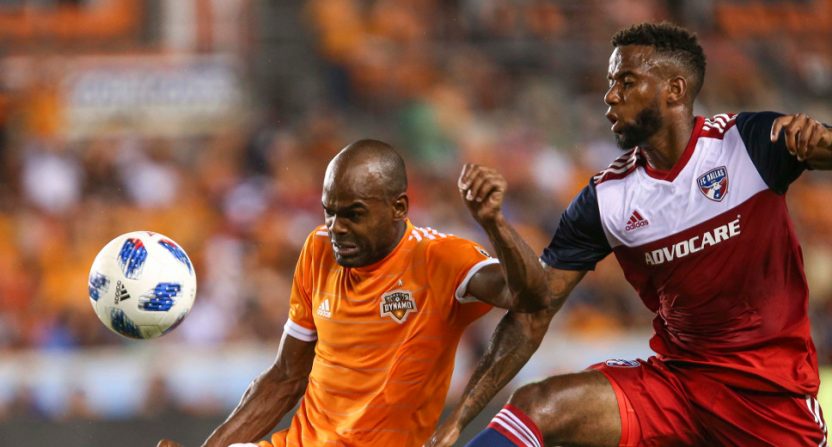 A year ago, Kellyn Acosta (seen at right above against Houston defender Adolfo Machado) was the FC Dallas academy’s prized product. He was 21, a USMNT regular and a stud for the first team, which was coming off a homegrown-heavy year in which they won a Supporters’ Shield-US Open Cup double. FCD prided themselves on their elite production of young players, and Acosta was the most notable example.

Now, 13 months after starting a World Cup qualifier at the Estadio Azteca, Acosta is off to the Colorado Rapids in a blockbuster trade. FC Dallas, again sitting at the top of the Western Conference, will reportedly receive striker Dominique Badji, the Rapids’ 2019 first round SuperDraft pick, an international roster spot for 2018 and 2019, and a percentage of Acosta’s transfer fee should the Rapids sell him on.

It is a fairly shocking transaction, given Colorado’s general unwillingness to make moves for good players and, especially, Acosta’s sunken transfer value. Badji is a useful MLS forward, but it’s clear that the 22-year-old midfielder has fallen significantly from last year’s heights.

Acosta, remember, was in the news last summer as a potential target of top-tier European clubs. FC Dallas opted to hold off on a big-money transfer, prioritizing short-term success and likely thinking their prodigy’s value would only grow as he turned 22 that July.

Dallas’s epic collapse last year, in which pretty much all of their players took significant downturns, changed everything.

His value tanked in the second half of 2017, his performances declining on a suddenly bad team. When he missed the first two months of 2018 with a groin injury and failed to win his job back, it tanked even more. He never regained his form from early last year, plummeting alongside his teammates during that unprecedented fall.

Acosta has started just eight games this season, being replaced full-time in midfield by Victor Ulloa and Carlos Gruezo. On June 23, he was subbed out 30 minutes into a game against the New York Red Bulls, ostensibly to put on another attacking player following a Red Bulls red card. Acosta was visibly displeased with the sub.

SUB – Kellyn Acosta making way for Michael Barrios. Love the mindset from Papi, but Kellyn looks furious. He did not shake Mikey’s hand and went straight towards the tunnel. #NYRBvFCD

FCD made it back to the top of the conference without him (they sit four points ahead of LAFC and five points off the Shield pace). With Acosta turning 23 in three days and Dallas looking for outside help to aid their playoff campaign, a trade made sense.

Acosta still has considerable talent and will be a USMNT contributor for years, making him a worthy gamble for a team needing central midfield help. Colorado always need midfield help and are in the middle of a lost season, so they rightfully pounced. Dallas apparently were selling low and Colorado rarely buy high. The match makes sense.

Badji helps fill FCD’s need for a striker, a need they’ve had for years now. The incumbent Maxi Urruti is a defense-first forward with a streaky at-best goalscoring record. Badji, who has seven goals and 2 assists leading a terrible Rapids attack this season, is quietly an above-average poacher of goals, and he’s historically been a good finisher — he’s overperforming his xG by 0.9, indicating he is scoring chances other strikers don’t.

It also could mean he has been lucky, but his low-volume shot statistics say otherwise; that his goals come on lower xG shows he is taking high-percentage chances. Badji takes 3.24 shots per 96 compared to Urruti’s 4.12. The Argentine tends to force things:

Neither Badji nor Urruti is an especially good passer, but Badji has pure straight-line speed that Urruti can’t match. That speed, which encompasses much of Badji’s channel-running skillset, pushes backlines and creates space underneath for players like, well, nobody in Colorado. But Santiago Mosquera and Roland Lamah could take advantage in Dallas.

Badji’s speed can act as a chance-creator in itself, given its shape-shifting nature and ability to unlock the all-important space in front of opposing defenses. If he’s smart about his runs, and he often was in Colorado, they could help take the place of a traditional number 10 like Mauro Diaz, who was recently sold. It’s unclear whom Oscar Pareja prefers, but he now has capable, proven versatility at the striker position that he hasn’t had in years.

The trade market for MLS forwards is mostly barren. Portland’s Fanendo Adi and Minnesota’s Christian Ramirez, likely the two most talented options, would cost additional money and wouldn’t fit as well into Dallas’s system anyway — Adi and Ramirez are taller, hold-up strikers without the defensive work rate of Urruti and Badji.

Don’t discount the impact of the first round draft pick, either; it will likely be high, knowing Colorado’s place in the standings. The No. 3 overall pick in this year’s draft went for $200,000 (split evenly between General and Targeted Allocation Money), so that should give a sense of its financial value.

The add-in that Dallas will receive a portion of a sell-on transfer fee — it is not specified how much — could indicate that Colorado are looking to sell Acosta immediately to Europe for profit. It seems unlikely that they’ll do it so quickly, though. Acosta’s value clearly isn’t high at the moment, and he gives the Rapids a quality young American to anchor a weak midfield. He’s a building block for a disastrous team.

Colorado have no replacement for Badji besides recent signing Yannick Boli (who has disappointed) and Jack McBean, who is replacement-level. Their goal for the rest of the season is to get minutes to players that need them — like Acosta, young center back Kortne Ford and wing-back Marlon Hairston — and develop some identity under coach Anthony Hudson.

This is something of an era-ending move for FC Dallas, just weeks after the Magic Unicorn Diaz was sold for a disappointingly low fee. They have moved on completely from three core elements of that 2016 trophy-winning team (Walker Zimmerman was traded to LAFC in the offseason) and now look to replenish their homegrown minutes. They no longer are looked at as MLS’s premier development organization.

Trading Acosta for so little is undoubtedly a disappointment in the long term. But it’s not at all a terrible return for him given the immediate circumstances, and it’s a trade that helps them right now and in the future, with the high draft pick. FCD will cut their losses and move on, while Colorado take the first step toward establishing a winning base.