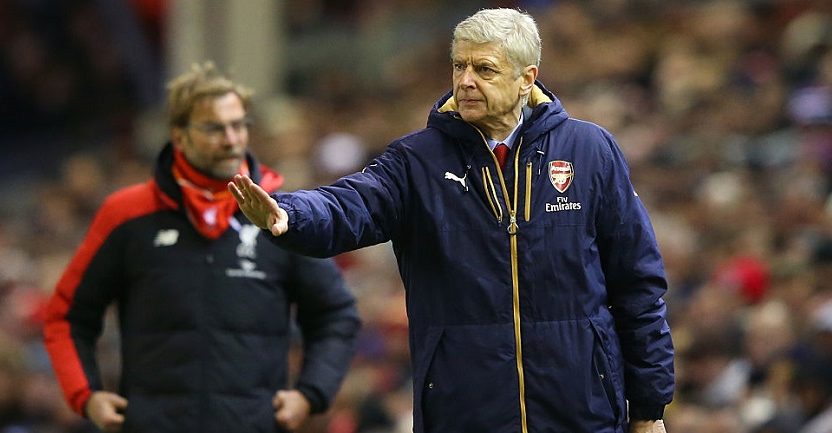 Sunday at 10 a.m. ET, a plethora of soccer goodness will kick off across the NBC family of networks. All 20 Premier League teams will play simultaneously, on what has become known as Championship Sunday.

In this past, this has provided some incredible moments. In 2012, Manchester City won their first Premier League title with a magical 3-2 over QPR. Unfortunately, this season the title and relegation have been wrapped up in advance of the final match day.

So what to watch? The good news is there is still some drama to be had, mostly in the race for the top four. Here is a short guide to help you figure out what to watch Sunday morning.

Getting that Champions League Money

All eyes will be on Arsenal, Liverpool and Manchester City this weekend. Those three teams are battling for two remaining spots in next year’s money-making European competition.

Manchester City is in the best position to make the top four. They’re in third and could lose, but still be fine even with a Liverpool and Arsenal win, provided the Gunners don’t turn around the club’s goal difference.  City will be traveling to Watford on Sunday, which bodes well for them. They’re 5-0-0 in their last five meetings with the Hornets.

Arsenal and Liverpool are in a much more precarious situation. Liverpool needs to win at home against Middlesbrough. A loss gives Arsenal a chance to leapfrog the Merseyside club. Given Liverpool’s inconsistent form against bottom of the table clubs this season, it’s no guarantee they’ll come away with three points.

The Reds did beat Middlesbrough 3-0 in December, so doing that again at Anfield would send them back to the Champions League. It’s simple for Liverpool: win and they’re in.

Arsenal has the longest odds of this trio. While City and Liverpool have their fate very much in their own hands, it’s not so easy for Arsenal. Arsenal needs to win at home against Everton. A draw could do the trick but it would require a 2 goal swing in goal difference in the Liverpool match. That’s not impossible, but Middlesbrough, who have scored just 27 goals this season, aren’t the team you want to pin your hopes on here.

There is a chance that Arsenal and Liverpool could finish level on points, level on goal difference and on goals scored. If that happens there would be a playoff for the final spot in the table. That would be wild. So any fans of anarchy should be cheering for a 1-1 draw between Arsenal and Everton, and a 2-0 win for Middlesbrough over Liverpool.

Unless you’re specifically a fan of some of the mid-table teams, then there isn’t too much to watch here. But that’s not to say these games aren’t huge for the clubs involved. The biggest match, outside the race for the top four, might be Leicester City taking on Bournemouth.

Bournemouth is currently in 10th, just two points ahead of the Foxes. If you think that a battle for 10th isn’t that exciting, that’s fair, but keep in mind the difference in prize money between 10th and 11th places is nearly 2 million pounds. That’s a sizeable chunk of change for some of these mid-table clubs. 8th through 16th place is separated by just 6 points, so the end of season payouts could change drastically for a lot of teams.

Leicester could jump as high as eighth in the table after Sunday. They need to beat Bournemouth and West Brom would have to lose to Swansea. The prize money for 11th place is 19 million pounds, the prize money for 8th is 24.7 million. That’s incentive.

If you’re not interested in the top four or watching mid-table clubs battle it out for a few extra million pounds, then you still have a few other options. For those Chelsea fans or anyone who likes trophies, the Champions will receive a nice little celebration on the SyFy network following their meeting with Sunderland. That seems cruel to Sunderland, to be honest.

The race for the top scorer is also yet to be decided. Harry Kane is sitting pretty after Thursday’s hat trick against Leicester with 26 goals. Right behind him is Romelu Lukaku with 24. A big day for the Belgian against Arsenal could put him on top. A really big day from Arsenal’s Alexis Sanchez, who has 23 goals, could also put him in the race for the league’s golden boot.

Sunday might be lacking the drama of year’s past, but that doesn’t mean it’s not there. You just have to know where to look. The top four race is going to be this weekend’s big story. But if none of this excites you, you could always just go on Twitter and see reactions from people wondering why soccer is on Bravo and the SyFy channel.

With all the Premier League action pushed to Sunday, Fox gets Saturday to push its Bundesliga coverage. The League may be wrapped up, but FS1 will have a real relegation six-pointer between Hamburg and Wolfsburg. Either side could fall into the bottom three and have to play in a two-legged playoff for the right to play in the Bundesliga next season.

Saturday will also be Philipp Lahm and Xavi Alonso’s final match before the two legends hang up their boots. They’ll be playing Freiburg on FOX as Bayern lift the Meisterschale once again.