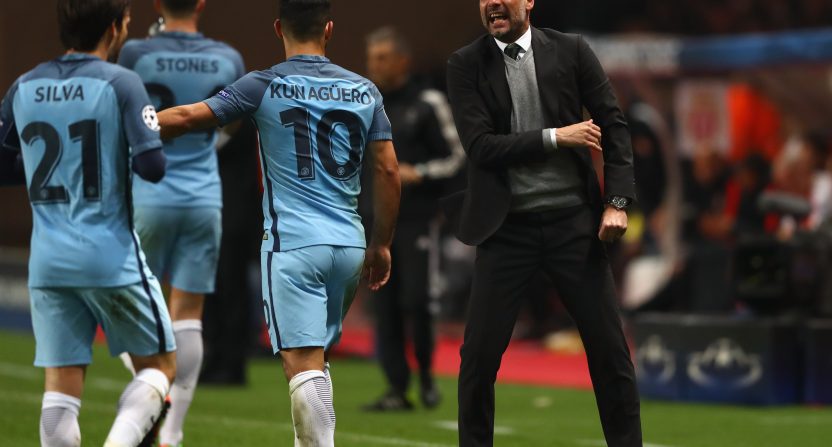 When Manchester City announced last February that Pep Guardiola would be their new manager, fans immediately started dreaming of Premier League and Champions League success. Guardiola, who in his short managerial career, is already one of the most decorated managers in the world and naturally, fans assumed his arrival at the Ethiad would soon bring about many trophies.

With City making a run to the Champions League semifinals last season and retooling over the summer, fans were hopeful that Guardiola would be the man to get them over the hump. Obviously, things haven’t worked out as hoped for the Sky Blues.

Their European campaign ended with a round of 16 loss to Monaco, and the Premier League title has effectively belonged to Chelsea since Christmas. This leaves the FA Cup as City’s only chance for a trophy this season.

With Manchester City’s owners being more of the impatient kind — and who isn’t in the Premier League these days (don’t answer that Arsenal fans) — you can expect changes to be made for next season. The only question is, where?

We all know the answer to this question is at the back. City’s goalkeeping situation is currently a mess, but after spending all that money on Claudio Bravo last season, it’s hardly likely that they would reinvest at the position.

Moving out from goal, even more of a dumpster fire for City has been their back four, specifically in the middle. John Stones, who City spent nearly £50 million on last season, is a great prospect, but it’s safe to say his development has not proceeded as hoped. Stones will figure it out eventually but at the moment, he is a complete liability for City at the back. If they continue to play him there every game they will always have issues protecting their goal.

Further up the field, City are loaded. If Ilkay Gundogan gets healthy, they’ll never have to worry about a holding midfielder. Up front, they are more than loaded with the likes of Sergio Aguero, Gabriel Jesus, David Silva, Leroy Sane, Raheem Sterling, Kevin de Bruyne, and Kelechi Iheanacho.

That right there is a ton of firepower, so it would only be natural to assume that City will focus their spending on shoring up the back, right?

Manchester City are a team with a bit of a spending problem. They always want the new shiny toy and defenders simply aren’t as shiny as new attacking players. Many teams have that problem, but it seems like a bigger problem for City. It doesn’t matter if City doesn’t have a need for a new toy. If there’s one they like, they’ll buy him anyway. This is how they end up signing players like Wilfried Bony, Fabian Delph, or Jack Rodwell, despite not needing any of them.

Then there’s the issue of changing over the team. There’s not one person in the world who wouldn’t say Sergio Aguero is one of the best strikers in the world. With 24 goals in 33 appearances this season, it would be hard to say he isn’t having a good season or isn’t a good fit in Guardiola’s system. But with the emergence of 19-year-old Gabriel Jesus, things may be changing.

Jesus only joined City in January, but with his terrific performances in late January, the unproven striker immediately relegated Aguero to the bench. Jesus will miss the rest of the season, which has allowed Aguero to regain his place, but it’s hard not to think that the Argentinian’s days in blue are numbered.

As per usual, rumors have been floating around all season that City are willing to spend all the money in the world to sign Lionel Messi. Usually that’s all just nonsense, but this year, due to Pep’s presence at City and the unrest at Barcelona, the chances of Messi moving to Manchester City have risen from “absolutely not” to “well, I guess there is a non-zero chance of this happening.” City coming to Messi would certainly stunt the growth of Jesus, but it’s not exactly easy to turn down the best player in the world.

Behind the striker, despite City’s plethora of options the team has been heavily linked with move for Real Madrid midfielder Isco, who could replace the aging David Silva. While that move does make sense, does City really need to replace Silva when they already have De Bruyne, Sterling, and Sane?

While fans had massive hopes, no one should have actually expected Pep to come into City and enjoy immediate success, given how tough the Premier League is and that Pep had no experience in England. Nevertheless, a lack of trophies is heavily frowned upon by City’s owners and they’ll make changes.

Aguero and David Silva are likely playing their final season in Manchester. Replacements for them will be brought in, the only question left to ask, what other unnecessary additions will Manchester City make at the expense of their defense?