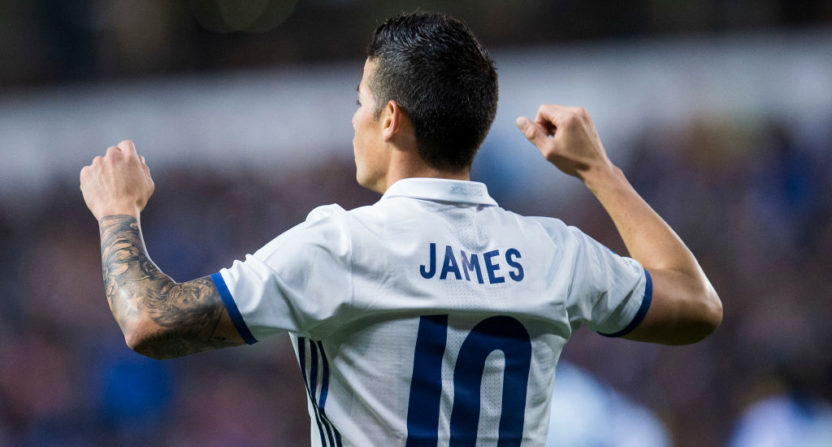 Bayern Munich’s purchase of James Rodriguez seemed to come out of nowhere. There were rumors in the late stages of the season that Bayern was looking at the Colombian, but not much else. James was almost certainly on his way out of Madrid, but it seemed England would be the likely destination.

On Tuesday, it turned out that where there was smoke, there was fire. The late-season rumors turned into reality and Bayern signed the 2014 World Cup Golden Boot winner. James’ move to Germany is on a two-year loan, with an option to buy. If the 26-year-old brings the same form that made him a star in 2014, it’s going to be a bargain.

The concern, however, is his recent turn at Madrid. James found himself getting far too acquainted with the bench this season. There is a real issue that James might suffer a similar fate at Bayern. There are some interesting options for the young man from Colombia, however.

Versatility in a crowded midfield

Bayern Munich’s strong suit is clearly the midfield. Even with the retirement of Xabi Alonso and Joshua Kimmich’s move to right back, the German club is not shy of talent. Renato Sanches will likely see more of the pitch this year. Additionally, the arrival of Corentin Tolisso essentially fills the void left by Alonso.

What James has working for him in his favor is his versatility. This is a key factor in Bayern’s decision to bring him to Munich. Last season at Madrid, James played in a number of midfield positions. Most crucially for Bayern, he’s been able to play out wide as well. Bayern has spent this summer trying to find backups for the brilliant but aging wingers Franck Ribery and Arjen Robben. Initially, the club was supposedly courting Alexis Sanchez. However, the Chilean’s wage demands seemed to have put a lid on those ideas. James fills a similar position to Alexis, but with much less pedigree.

If James can find a home on the left or right he’ll be an ideal signing for Bayern. If Bayern sticks with a 4-2-3-1 like they did in the latter half of the previous campaign then James is capable of playing anywhere in the middle 3. In that scenario, the Colombian should feature out wide on most occasions, but his ability to create can give the likes of Thiago Alcantara a night off if needed. In a pinch, his strong finishing could even be used in some kind of false nine setup, but that is certainly not why he was brought on board.

With Ribery and Robben, as well as Serge Gnabry and Kingsley Coman, Bayern has four wingers. However, Gnabry has been making noise about wanted to leave on loan and Coman was too inconsistent last year. James gives Carlo Ancelotti some room to maneuver here. James will provide a scoring touch out wide, something Bayern would lack if Ribery and Robben are unavailable. But such is James’ versatility that even with Bayern’s two long-time wingers in the lineup, there is still room for the new man. Either a 4-2-3-1 or a 4-3-3 would give James a place to play.

Last season, Bayern were far too reliant on Thiago and Robert Lewandowski to generate offense. When either player was out of the lineup Bayern struggled to break down the opposition. James will give Ancelotti an extra playmaker, either to give Thiago a breather or as an another option on the pitch.

If deployed out wide, James gives Bayern another option to strike from distance as well. The 26-year-old became a household name with a stunning goal during the world cup. It was a strike that won him the Puskas award for best goal from FIFA. As of now Robben and Arturo Vidal are the only Bayern players that can routinely find the net from distance.

If Bayern can get the very best out of James, they’ll get an extremely talented and versatile player. A lot of this will depend on two things. One, how well he handles not being the main man. Some of his critics say he’s more successful with Colombia than he was with Madrid because he’s the main attraction with his country. Second, how much he’s willing to be used out wide. Bayern’s biggest need might be suitable backups to Robben and Ribery. If James can provide plenty of goals and assists from the left or right, then this will work out just fine.