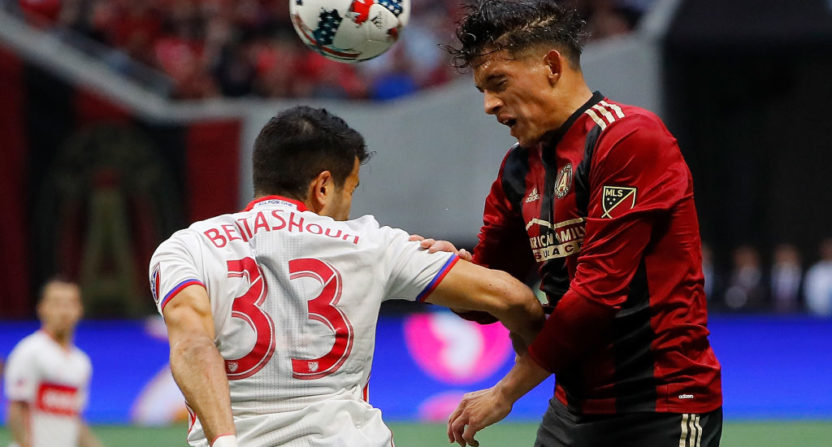 After the long slog of the MLS regular season the MLS Cup Playoffs are about to begin. Playoffs in all sports are notoriously fickle, but even more so in MLS with its format and the randomness of one game in particular.

In case you missed out on the final standings, here they are:

One-game playoffs between each conference’s sixth- place and third-place teams, as well as another between the fifth- and fourth-place teams take place later this week, with two-legged aggregate series with the other four teams which had byes begin over the weekend. Who are the favorites to win MLS Cup in 2017?

Toronto FC: How could the team with the most points in MLS regular season history (69) not cap off this nice season with the trophy they were denied on penalties last year? This playoff format can be tough for top teams, and with a potential matchup with free-scoring Atlanta United looming, Toronto could be truly tested unlike they were even against NYCFC and Montreal last year.

But with Sebastian Giovinco, Jozy Altidore and Michael Bradley looking to be in good form, and that resolute depth which is unmatched in the league, they have to be considered favorites at this stage to win the Cup. It’s odd to think that their toughest test in the playoffs could potentially come first.

Atlanta United: The East’s fourth-placed team could easily be its second best, and perhaps the second-best team in the league. Their free-flowing attack is lethal, and will trouble the most resolute defenses in the league. But their defending is suspect, they tail off as their system saps so much of their energy late in games, and their fixture pile-up dating from early September to now is going to cause a big problem on their legs.

But when they are on, they’re on. A potential matchup with Toronto FC is incredibly exciting, but they must get by Columbus first, who has been the best team in the league in the last two months.

Seattle Sounders: Why haven’t the defending holders of the Cup been mentioned sooner? Finding consistency for them has been difficult, and may be more difficult still after a Clint Dempsey red card in their final game against Colorado. But Brian Schmetzer’s team has looked better of late, has combined stars like Nicolas Lodeiro and Dempsey with good glue pieces like Will Bruin and Harry Shipp to find form late in the campaign, and the potential return of Jordan Morris looms large.

The Sounders aren’t the same team they’ve been in past years, but shouldn’t be overlooked.

Portland Timbers: Consistently inconsistent from season to season. West runners up in the playoffs in 2013, to missing the playoffs in 2014, to MLS Cup Champs in 2015, to missing the playoffs again last year, to winning the West in 2017. And while form has been maddening for them once again this season, they are where they are for a reason. Diego Valeri has been MVP level good this year, and if his form can elevate the Darlington Nagbe’s and the Fanendo Adi’s of the world, then why wouldn’t the Timbers have a great chance to take the Cup back from their Cascadia foes?

NYCFC: Their playoff games will be at Yankee Stadium after they had to move two games to Hartford and Queens, thanks to the Yankees. But back in their “home” surroundings, they will be a difficult out. Naturally, they have David Villa, who is still amazing. New York also should be healthier down the stretch than they’ve been all season, especially with the potential return of Ronald Matarrita. And it would be hard for them to perform worse in this postseason than they did last year.

But they too have been sputtering down the stretch, really squandering a potential Supporter’s Shield challenge. That attack means they cannot be counted out, but NYCFC does have some areas to worry about. And oh, by the way, if the Red Bulls beat Chicago… how about a New York Derby in the playoffs?

All 12 teams that make MLS Cup Playoffs do have a great chance of hoisting the Cup because of the postseason format, which does no one any favors. Anyone can catch fire at the right time and be on their way to winning the Cup at the expense of better teams. But this does make for some fun and entertaining soccer with tasty matchups on the horizon.