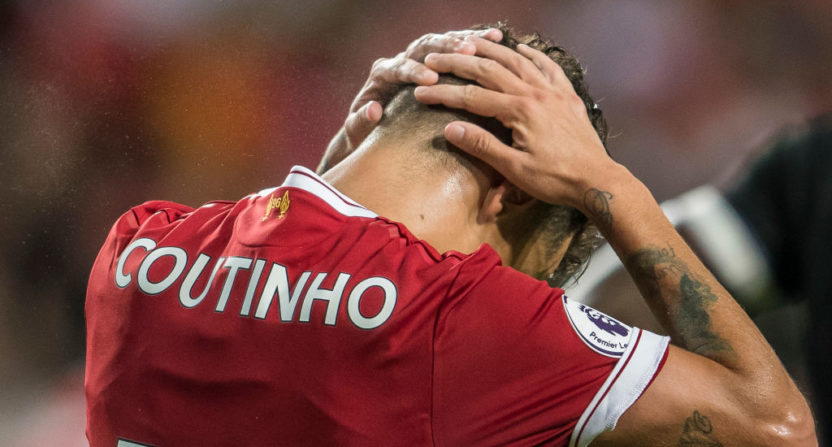 One of the most drawn out transfer sagas in world soccer is now over, with Liverpool selling Philippe Coutinho to Barcelona for a reported £142 million (€160m, $192.7m), with £105 million of it up front.

It is a massive deal; the second biggest transfer in the history of the sport, and Liverpool now has a Coutinho sized hole in their pursuit of the Champions League. Speculation will immediately begin on who can next wear the #10 shirt at Anfield, and who can be brought in to take over and fill out the rest of the “Fab Four” with Mane, Firmino and Salah. Here are some names that will be mentioned, and whether they are the next man up at Liverpool.

Lemar was one of the few Monaco stars from last term that did not leave the club during their offseason fire sale, but there is little doubt that his time at the club is numbered. Multiple English clubs, including Arsenal and Liverpool, have had interest in Lemar in previous transfer windows and would certainly be keen to re-ignite that interest now. Lemar has not had the type of breakout season that he had one year ago, as he sits on only four goals and four assists in all competitions, but with Jurgen Klopp’s brand of attacking soccer, many would expect that form to pick up. Multiple reports suggest Liverpool are going to move quickly to find Coutinho’s replacement, with Lemar right at the top of the wishlist. Leonardo Jardim has said repeatedly that Monaco will not be selling Lemar in this window, though with a massive bid, the thought process may change there.

Lemar seems destined to leave Monaco sooner rather than later, probably to England. And at this stage, Liverpool seems his most likely destination. It would take some time for him to bed into the attack, but with his pace and technicality, he seems like a very good fit to replace Coutinho at Anfield.

If a Lemar deal can’t be pulled off, reports also suggest the Reds may chase Leicester winger Riyad Mahrez, who ever since his rampant form in the Leicester title winning side from two years ago has been linked with a move away from the club. He has never quite recaptured that form, though now that he is a tad more settled, his eight goals and seven assists in all competition looks more like what Mahrez is truly capable of.

Mahrez is more of an out-and-out winger, whereas Coutinho operated more as a number 10, though Mahrez has experience at this position. In Liverpool’s fluid attack, Mahrez would be able to change positions and interchange with Mane, Firmino, etc. and his left foot is still very special. In comparison to Lemar and other potential targets, acquiring him may be a tad underwhelming, but the transition from Leicester to Liverpool would be an easier one than Monaco to Liverpool, in theory. This deal would also likely be cheaper than a Lemar deal, and could be more easily worked out this month.

If it seems like Mahrez is plan B, that’s not exactly wrong, but there is plenty to like about this deal from an Anfield perspective as well.

Keita is coming to Anfield next summer in a deal worth over £50 million, but with Coutinho out the door, there is talk the move could be expedited from July to January. Keita is not quite a direct replacement for Coutinho; he’s more of a deeper lying midfielder than Coutinho was, but with Klopp’s admiration for him, and his age (22), he certainly could be used further up the pitch. However his recent form for RB Leipzig hasn’t been quite up to the standards of his transfer fee, so the likelihood of the deal being expedited is unlikely. Not to mention, Keita is cap-tied for Champions League and cannot help Liverpool there. He is no doubt a talented player, and one that Klopp and company are excited to have next season, but he is not a Coutinho replacement now, or next summer.

American soccer fans would be keenly interested if Pulisic made a blockbuster move from Dortmund to Anfield. It would not only be the most expensive transfer for an American player ever, it would smash headlines across the sports spectrum in the country. And of course, there is the Klopp connection and recent transfer rumblings to go by, making this deal more than just idle speculation.

But would and could this deal happen now? Probably not, considering Dortmund’s tough stances on transfers of this magnitude. It certainly is a deal that could happen at some point, but with the particulars of Dortmund’s season, selling a player of great importance like Pulisic as the club tries to rebuild after a disastrous fall is unlikely. Pulisic wouldn’t be able to directly replace everything that Coutinho brings, but he operates in similar spots on the pitch and in Liverpool’s attack, he’d certainly flourish. But at this stage, the deal doesn’t seem incredibly likely in the summer, let alone now.

Liverpool haven’t lost in any competition since a 4-1 paddling against Spurs in October, which is their longest unbeaten run in 20 years. Keeping that up with Coutinho no longer a part of the furniture will be difficult. But the club is hunting out replacements, and these four names are ones who will be linked to Anfield moves, and all could make that move. Lemar is clearly the number one target, but Liverpool aren’t exactly wanting for options.

But replacing Coutinho’s performances and impact on the squad will be incredibly difficult, even as the transfer saga now has mercifully come to an end.