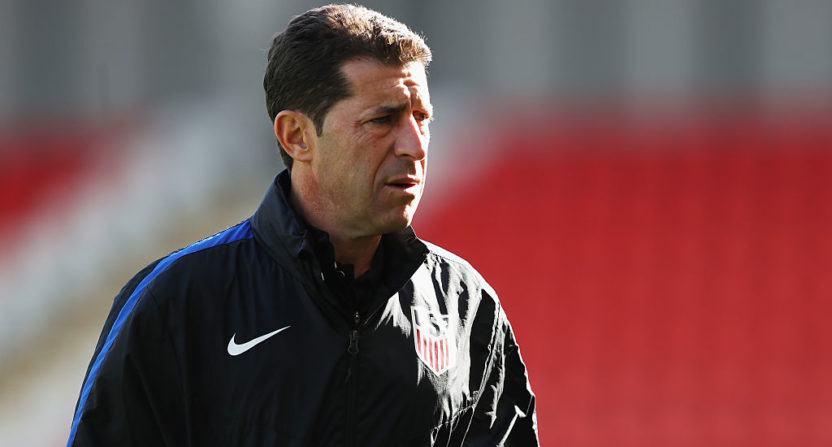 Even if the U.S. qualified for the World Cup, Bruce Arena wasn’t staying on past 2018 to lead the the men’s national team into a new qualifying cycle. That timeline has been accelerated dramatically after the shocking result in Trinidad.

Naturally, one of the first questions being asked about the future of the program is who the next manager will be. Many names have been thrown around, and here are some of the most plausible choices, and maybe a few that this scribe thinks should be considered.

When anyone puts together a list of candidates for the next U.S. manager, Ramos’ name is right on the very top. This makes sense, as Ramos is not only a legend on the field for the U.S., but has also been a coach in the program since 2011 both as U-20 coach and an assistant to Jurgen Klinsmann. Ramos will command the respect of the players, particularly those he’s coached through the youth ranks. His U-20 teams in 2015 and 2017 both made the quarterfinals of those respective World Cups, and many of those players he’s coached have either made the leap or are certainly capable of doing so.

But hiring Ramos would reek of U.S. Soccer going the “safe” route. Not much would be changing in the program, and though Sunil Gulati believes that dramatic changes aren’t needed even after a disaster like what happened in Couva, the message that hiring Ramos would send wouldn’t be one of risk, and trying to advance the program in a new direction. Right now, he’s the odds-on favorite to take over, and could certainly be an “interim” hire to lead the team through friendlies until the World Cup is over and a new cycle officially begins. He’s a safe choice, but U.S. Soccer, and particularly Sunil Gulati, might not be able to make a “safe” choice anymore.

Vermes has been coaching Sporting Kansas City since 2009 when they were the Wizards, and he has practically shaped that club in everything it has done. He also has a distinct way of playing that would be consistent and identifiable, and also would easily command the respect of players around the program. His 66 caps as a defender from 1988-1997 are also a plus, and he certainly knows the program and while he wouldn’t exactly be bold, he’d want to implement changes that may be needed for the national team.

U.S. Soccer’s biggest issue with getting Vermes would be getting him to leave Sporting Kansas City, which is not as easy as it sounds. At 50, he’s not exactly a spring chicken, but young in managerial terms. With a full cycle, he’d be able to implement his identity and playing style on the team, and would orient them in a new direction. All while also allowing U.S. Soccer to stay inside its “box,” so to speak.

If you want a “hipster” choice for who should be the next U.S. manager, Pareja always seems to be that choice. Pareja has worked as a U-17 assistant before, and his track record with young players at FC Dallas is unchallenged and unquestioned. His struggles this year aside, it is his work as a coach and ability to mold young players and put his trust in them that has propelled FC Dallas’s rise to a league power. For a national team that desperately needs to turn over the player pool to the future, Pareja would certainly be the man who could help that process get kickstarted.

Like with Vermes, getting him out of Dallas is going to be a difficult task. But if U.S. Soccer wants to take the program in a different direction while staying in their “box,” Pareja would be an inspired choice. With a full cycle, he’d be able to give young players the chance they need to succeed, while also commanding the respect of veterans from MLS.

Here’s an out of the box choice that makes sense the more you dive into it. Vanney has helped oversee Toronto FC’s renaissance from a laughing stock to MLS powerhouse, and that is no small feat. Yes, he has the vast resources of Canada’s two big media giants at his disposal, but his success in Toronto hasn’t just been with Sebastian Giovinco, Jozy Altidore and Michael Bradley, it’s been with players like Marky Delgado, Raheem Edwards and many others either off the MLS scrapheap or young players who were given a chance to bloom. He’s also tactically flexible, showing an ability to get his team to play a structured 3-5-2 when necessary and in other formations too.

Vanney, who is only 43, does not nearly get enough credit for what he’s done with Toronto FC in his first head coaching job. While these three seasons of success may not be enough pedigree to get him the U.S. job, he certainly deserves a look and has rocketed past a few other potential candidates in MLS who have stagnated while he has grown as a manager.

Hat tip to CBS’ Roger Gonzalez for this idea, which sounds silly until you dwell on it more. Martino has not only the international pedigree, both with Paraguay and Argentina (especially with the former as he took them to a World Cup quarterfinal back in 2010), but now knows and understands U.S. Soccer. That always seems to be an important pre-req when looking for a national team manager and with Martino’s ability to implement a style and identity, suddenly he seems like a fantastic option to help reboot the program.

Would U.S. Soccer take a risk and hire Martino away from an Atlanta project he seems fairly attached to, and a risk in going with something largely outside of U.S. Soccer’s “box,” as I’ve put it, even though he’s now been a part of soccer in this country for over a year? Probably not. But he’s someone they should seriously consider. Martino could add in a new spin and view to U.S. Soccer that is desperately needed without having to go completely outside the program and country to do it. Hiring Martino would be an inspired choice and a breath of fresh air for the program.

Caleb Porter (Portland Timbers): Always the hot name in U.S. coaching circles to eventually take this job, but he’s struggled in Portland recently and his message may not be hitting home as it once did. He’s also not entirely developing players as his reputation would suggest. Still, he’s a good option.

Jesse Marsch (New York Red Bulls): Another young manager with plenty of potential, but his future seems to be more with the Red Bull organization in Austria and Germany than it does with U.S. Soccer. Still, he has a distinct style and is good with young players.

Marcelo Bielsa (Lille): I’ve always wanted to see Bielsa coach the U.S., as not only would he implement a distinct and unique style on this country’s soccer that would be a defining identity, he’d be an outside voice in a program that is far too insular. He’s certainly a firebrand and would be a huge risk, but the rewards would be so great. But his stock has fallen since Tata Martino is a similar manager who is already in the U.S.

There are plenty of choices beyond the eight names mentioned here that would deserve a look. But whoever the next manager of the USMNT is, he’ll have his work cut out for him lifting the burden weighing on everyone’s shoulders that may not be lifted for another four years.