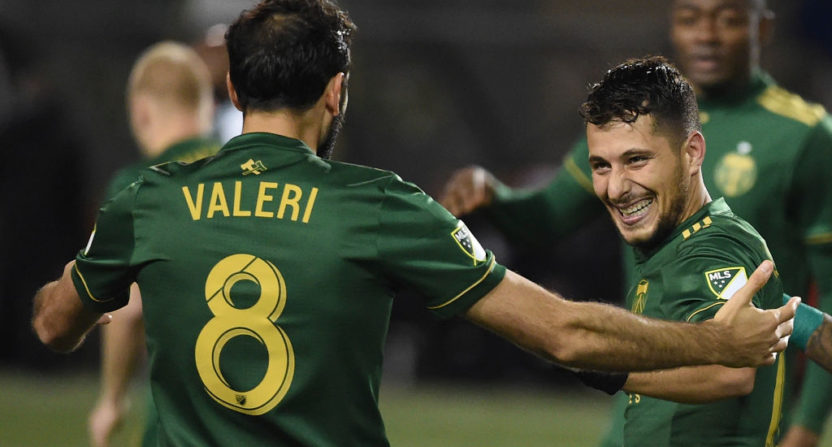 The three MLS clubs in the Pacific Northwest have traditionally harbored some of the best fanbases American soccer has to offer. Seattle and Portland both have loud and passionate supporters that rival any in North America, and depending on who you ask, each have the best base in the league. Vancouver play in the beautiful BC Place, retractable roof and all, and house an impressive amount of national pride.

On-field success has (mostly) come with the cultural success. Seattle and Portland have won the last two MLS Cups on the backs of talented Argentine DP No. 10s (Nicolas Lodeiro and Diego Valeri) and hard-nosed, rough-on-the-tackle ball-winners behind them (think Ozzie Alonso and Diego Chara). Fanendo Adi and Obafemi Martins dominated as Nigerian No. 9s just two and a half hours away from each other for years, while domestic stars Clint Dempsey and Darlington Nagbe have doubled as national team sensations. The best teams in MLS could not be discussed without mentioning these two teams.

All three have invested locally, with each owning and operating USL reserve clubs and consequently producing local talent like Jordan Morris. Vancouver have the most talented 16-year old in the country, Alphonso Davies, playing for the first team on a weekly basis. Portland, although they could be more effective in using it, have an inordinate amount of potential stars playing in the USL. The only downside to all of this is turf.

2017, though, has not seen the Cascadian success we’ve been accustomed to.

Only one of the three currently sit in a playoff position. Portland are languishing in fifth after spending much of April at the top, while Seattle are struggling to break out of an early season slump (they’re in eighth) and Vancouver continue their run as one of the worst teams in the Western Conference (they’re, surprisingly, in seventh).

The Timbers have just a point from their last four games, scoring exactly twice in that span. A high-flying start to the season that saw them on pace to score a record amount of goals has faded fast, and now they will face a battle to fend off surges from teams like LA and Minnesota. Seattle, who snuck by Portland 1-0 at home on Saturday, have looked asleep early in the season. Like Portland, nothing has clicked.

Vancouver have picked some good results recently, but they remain out of the playoffs, and it’s hard to argue that they have too little attacking talent to truly contend.

Lumberjack (lumberman?) Timber Joey has had very little wood to cut of late after getting a lot out of his chainsaw early in the season. The Timbers have just two goals in four games after scoring 20 in their first 11. And despite ample possession in the final third, they have consistently struggled to pick out final balls and finish whatever chances they’ve created.

Portland is still attacking like they have for the past couple of seasons. The philosophy is the same: play through Liam Ridgewell in the defensive half, Valeri just outside of Zone 14, and Fanendo Adi in the final third. Circulation horizontally in the space outside the box and then balls from Nagbe, Valeri, or Sebastian Blanco into Adi with his back-to-goal is the basic formula.

In addition, Nagbe’s played on the wing with the arrival of Blanco, and his inverted nature has opened space for left back Vytas to overlap. Portland have played through him as well: 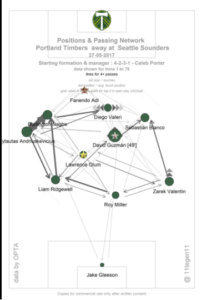 Vytas’s dot is large, and the line between him and Nagbe (indicating the amount of passes exchanged) is thick.

This should, theoretically, be a strength. But for a reason that I don’t think anybody has figured out, it hasn’t been recently, and that is a statement we can safely use to describe their entire attack. Valeri, Nagbe, Adi, and Blanco are all really, really good players, and for some curious cause, they haven’t been connecting. It’s hard to decipher a specific tactical reason.

Many thought, with reason, that the immediate demise of Portland would be their backline, which was decimated by injuries in preseason. Lawrence Olum and Roy Miller are replacement-level center backs in MLS, and they have been the replacements for center back Gbenga Arokoyo, who tore an achilles in preseason. As it turns out, they haven’t been the problem.

Caleb Porter has a puzzle to solve. He’s taking suggestions.

The early-season similarities between the Sounders and the Timbers are uncanny. Both attacks are impressively talented, but neither seems to be on the same page right now.

Seattle, with the return of Clint Dempsey this year, have a very good argument for being the second-most talented team in MLS, behind Toronto. They have a striker, presumably, in Jordan Morris. They have their creator in Nicolas Lodeiro (who went into the season as the second-best player in the league). And they have their goal-scorer in Dempsey. Add Alonso and Cristian Roldan behind them and Joevin Jones overlapping at left back and you have a team that should score two goals a game. Right?

So far, that hasn’t happened. Unlike Portland, there are slightly more clear cut tactical reasons for why.

The biggest question for the Sounders right now is what position Morris plays. He scored a ton of goals last year as a lone striker, but late in the season, Brian Schmetzer found success by playing a truer No. 9 up front (last year it was Nelson Valdez) and moving Morris to the wing. That’s a big reason why they won MLS Cup.

Morris has been played mostly as a striker this year with the departure of Valdez, and while that should work on paper — look at what they did with that foursome on the field last year — it really hasn’t yet. The decision they make there will determine what they do this summer with the DP slot Valdez left.

Outside of that, you have to look to how they formulate attacks for reasons why they’ve struggled.

Seattle keep a ton of possession in the final third, and they like to get Lodeiro on the ball all over that space. His usage rate is very high as a result:

It’s obviously good that they are making good use of their best player, but it can actually be a problem if he touches the ball too much, because teams are able to predict his movements and suffocate his passing lanes, forcing him, often, to push the ball wide. This is where Jones operates, and while he’s arguably been the best left back in the league so far, they go back to him so much that 1) teams figure it out and 2) he gets absolutely exhausted by the end of the game.

Their system of final third possession based around Lodeiro is not ideal for Morris, who is better suited to run in open space rather than play in tight areas and receive crosses from Jones.

Schmetzer should think about adjusting their attacking focuses. If not, they could continue on this path, which may not lead to the playoffs.

The Whitecaps are in a bit of a different situation than Seattle and Portland. They don’t have that kind of firepower, and they don’t have previous MLS successes to look to.

They have, though, found some measure of success with a simplified 4-1-4-1 look that condenses the field and makes use of d-mid Matias Laba, long one of the most underrated players in MLS. Laba has played closer to the backline alongside Andrew Jacobson, which allows energetic attacking players like Davies and Cristian Techera to find positional freedom farther up the field.

Fredy Montero needs to start scoring goals, and they could use more attacking production from the full backs, but overall, it’s not bad from the Caps. Scratching defensive results will be their M.O. more than anything else, and that will be fine.

They pretty clearly got gypped in a 1-0 loss at home to D.C. United on Saturday, though:

Penalty to DC and well folks…. that’s what we call a dive. pic.twitter.com/8JSMZjfGs5

Luck will be necessary for this team in the coming weeks. But as their Cascadia rivals showed us in 2015 and 2016, nothing that happens in May is final.