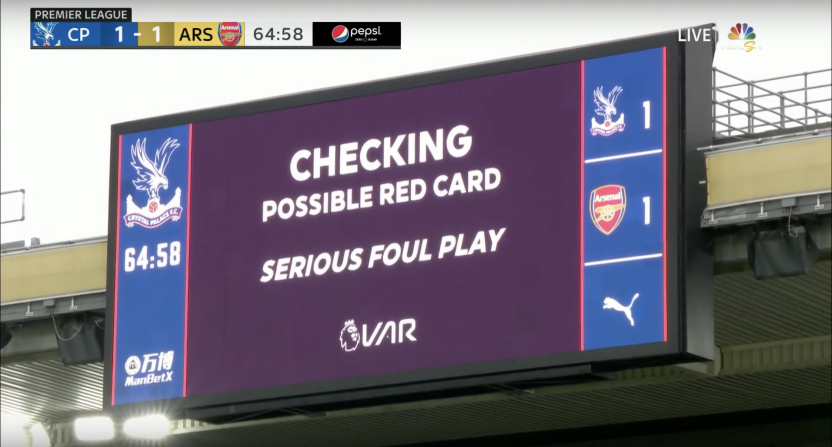 The talk of the Premier League all season has been its use (or abuse) of VAR, the Video Assistant Referee that’s supposed to assist referees in overturning “clear and obvious” errors. The result has seen officials using the system as more of a crutch while taking a very literal interpretation of the offside rule, making decisions on margins that would be to determine by any human eye. Much of the joy has been taken out of the game as no one knows whether or not a goal will be overturned due to VAR intervention.

Personally, I have been a proponent of VAR usage in soccer. Referees aren’t perfect, and VAR should help. In other countries, this has worked out for the most part.. So why has the Premier League had so many issues with VAR?

For one, while there is a monitor available for every referee to use, they have chosen not to use the monitor in every Premier League game so far. The only time an English ref conducted a VAR review from the on-pitch monitor was Michael Oliver utilizing the monitor in the FA Cup.

Instead, the referees have gone with the advice of the VAR official, and while that (arguably) might save time, it can lead to questionable rulings. For instance, when it comes to situations like penalties, red card fouls, and handballs that necessarily require an interpretation of the rules, each referee has their own perspective. The new handball rules have eliminated many gray areas, but that doesn’t mean there aren’t any.

When the center ref consults with the VAR official, that center ref may be recommended a decision based on a different perspective on the rule. That can lead to inconsistent rulings and make things even more difficult for officials and the players. Going to the monitor at least lets the official on the pitch make the judgment from beginning to end.

Another issue: officials have often ignored the “clear and obvious” part of the rule, which is theoretically an important part of the whole system as designed. Last weekend, five decisions in four games were overturned due to VAR. Of the three calls that didn’t have to do with an offside call (we’ll get to that in a bit), two of them could be argued as not being “clear and obvious” or as a potential misinterpretation of the rules.

During the Sheffield United-West Ham game, West Ham’s Robert Snodgrass had his 92nd minute equalizer overturned when it was ruled that Declan Rice committed a handball violation in the buildup to the goal. The replay showed that the ball was headed by Sheffield United’s John Egan into Rice’s hand.

Normally, a handball in the buildup to a goal would result in the goal being disallowed but in the new handball rules, the IFAB still gives leniency on a ball being deflected into a player’s hand which seemed to happen here. At the same time, it states that goals will be disallowed even if a handball is accidental. It all depends on how you interpret the IFAB’s rules.

The second disallowed goal on a handball happened in the Everton-Brighton game. Dominic Calvert-Lewin scored for Everton but his goal was disallowed after VAR determined that he scored on a handball.

Offside has been a major issue in the Premier League in that calls are being reviewed and determined by the slimmest of margins that seem indistinguishable to the naked eye even under replay, much less in live action. Technically, these are the correct calls (as long as the lines are drawn correctly) but it’s not exactly what the offside rule or VAR was meant to be in the first place.

Both offside calls that were overturned last weekend occurred during the Leicester City-Southampton game. The first, Southampton had a penalty overturned due to Shane Long being reportedly offside and the call is close enough that you can’t tell on the broadcast whether or not he’s offside.

The second VAR overturn had Leicester’s Jonny Evans ruled offside and his late equalizer disallowed. While the angle makes it somewhat difficult, there seems to be enough space between Evans and the final Southampton defender that it was pretty clear Evans was offside. So this was definitely the correct call.

The final overturn had to do with Arsenal’s Pierre-Emerick Aubameyang fouling Crystal Palace’s Max Meyer. While the center ref relied on the VAR official again, it seemed like it was clear enough that Aubameyang committed a reckless challenge and deserved to be sent off.

Even though this seemed like the correct thing to do, Aubameyang’s red card wasn’t without controversy. In the Tottenham-Liverpool game the next day, many felt that Andy Robertson’s challenge on Japhet Tanganga should have been reviewed and possibly result in Robertson being sent off because his studs went into Tanganga’s ankle just like Aubameyang did. The VAR official (a different official than the Palace-Arsenal game) determined that the Robertson play didn’t need further review.

What can referees do to fix these issues? Using VAR for what it was originally meant for would be a start. If something is actually clear and obvious, it should make for easier decisions. It would also help if the offside rule wasn’t treated so literally. Another solution is increased communication between teams, fans, and commentators. Fox Sports in Australia aired a conversation live between the match ref and the VAR official as they both reviewed a foul. The end result was a red card and fans at home got a clearer understanding what both officials were thinking in making that call.

Listen in to the conversation between referee and VAR when they decided to upgrade Rhyan Grant's yellow card to red 👂 pic.twitter.com/3tOG7bsUFd

This should be standard in any video review. What reason would there be for referees to not be mic’d up? It’s even worse if you’re inside the stadium during a VAR check. Coming from personal experience, I went to an MLS game that had a VAR check and you have no clue what’s happening while inside the stadium.

These solutions can only happen if the Premier League wants to improve. This sounds like a conspiracy theory, but could it be possible that Premier League referees hate VAR and are intentionally making things difficult to get fans, teams, and the media to all hate VAR and have it go away? If referees really wanted to get it right, why do they not go to the monitor? Every week I’m getting more and more convinced this is at least possible.

There are valid reasons why people aren’t happy. When there’s a review taking place and everybody, including the experts, are throwing their hands up in the air, that’s the sign of a flawed system. Something clearly has to change with how VAR is implemented. If the Premier League was smart, they’d do it as quickly as possible to minimize further exasperation and outrage.