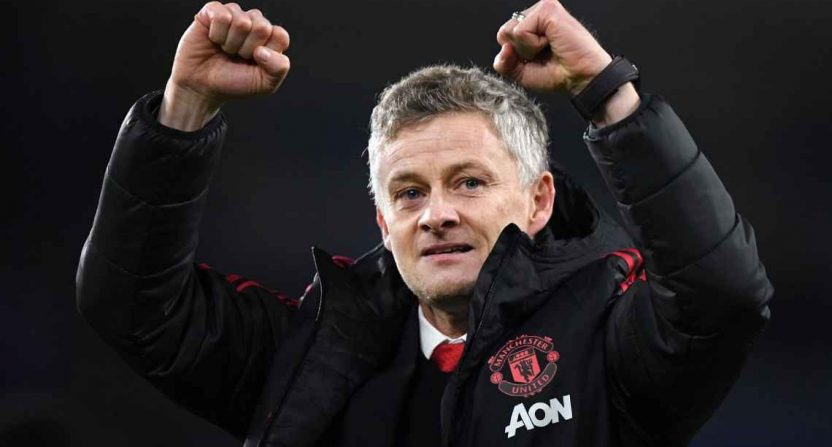 This was never supposed to happen to Ole Gunnar Solskjaer. When the former Manchester United striker was named caretaker manager in December, his job was supposed to be simple. He was supposed to simply not be Jose Mourinho

Solskjaer was supposed lift the spirits around Old Trafford. He was supposed to smile and say the right things before handing the ship off to the next guy in the summer. On a smaller scale, he was supposed to help evaluate the squad; help differentiate between who was a United player and who wasn’t up to par.

He was never supposed to win his first eight games in charge. The nine straight away wins, a streak that featured wins at Tottenham, Arsenal, Chelsea, and culminated in an astonishing win at PSG, never should have happened. United were not supposed to be in the top four race with three games to go.

After those streaks, Solskjaer’s Manchester United was supposed to come back to earth. They were supposed to regress. But not like this.

His appointment as permanent manager was always going to have skeptics but it shouldn’t have been called into question to this extreme. In their last 10 matches, United have won two, drawn one, and lost seven. That’s not regression, that’s a full-on collapse.

And you know what? That collapse has come at the perfect time.

Manchester United are a club littered with problems. For all the biggest clubs in the world, United are one of the least modernized. This dates back to the Sir Alex Ferguson years but when the boss retired, the club doubled down on their antiquated structure instead of modernizing like everyone else.

During United’s summer tour and the early part of the season, it was hard to take whatever Jose Mourinho said to the media seriously. Every word out of his mouth seemed to be a complaint. In between complaining that his players weren’t good enough, Mourinho criticized the board and the structure of the club.

Had United simply kept on winning and moving up the table, it would have been easy to say, “Wow, Jose Mourinho really was the problem,” and got back to business as usual. Their actual problems would be swept under the rug and the club would be worse off long-term as these problems would most assuredly rear their ugly heads again.

Mourinho was certainly a problem but he wasn’t the problem. United’s biggest problems have been exposed during Solskjaer’s nearly five months in charge. The club have lost their way for a while; they’re run like a business. The squad simply isn’t good enough, which is a direct result of bad player recruitment. Ultimately, the man calling the shots, Ed Woodward, isn’t good enough.

Ed Woodward is a superstar driven person. He wants the big shiny player who can sell shirts. That’s dictated nearly everything United have done over the past six years. Huge transfer sums have gone towards sexy attackers, while addressing the club’s needs in defense have been largely ignored.

Even worse, United cut funding to their academy. What was once a rich source in bringing in new players saw their U23 team relegated last season.

Woodward knows how the fans feel. For months, Ed Woodward spoke about hiring a director of football. But words and actions are two different things. When he’s been asked about it, he balks at issuing a timeline. It’s almost as if he doesn’t want to hire one.

Without a director of football, United have been at the whims of Woodward, who prefers a superstar’s marketing potential than on-field product, and the current manager. That’s how they ended up with Romelu Lukaku, a Mourinho type player who doesn’t fit the rest of the team.

A director of football would put in place a long-term strategy and that’s what this team needs. Time and a strategy.

That’s what makes this collapse so well timed. United need a long-term plan. They need a rebuild. They need to bring in younger players and most importantly accept the fact that they probably won’t compete for many trophies next season.

In other words, they need to have a lot of patience with their new manager. Jurgen Klopp has built a juggernaut at Liverpool, but he didn’t do that overnight. It took him years of signing, developing, and evolving to get the team that he has now.

Enter Ole Gunnar Solskjaer, the perfect manager for this rebuild. Unlike Mourinho who is only in it for himself, Solskjaer wants the club to succeed. He knows that this won’t happen overnight. Most importantly, he’s the one man that will provide and will be given patience.

Should United hire someone else and the results don’t quickly follow, pressure would rise for something to be done. Ole is a club legend, if he can’t get patience then no one will.  If the club continues down Ed Woodward’s path of immediacy, nothing will change.

This isn’t to say that Woodward needs to be fired. He’s a commercial genius who brings in untold amounts of revenue to the club. The commercial side of the club should still be headed by Woodward, but the football side needs someone else. If that doesn’t happen, then it doesn’t matter who Manchester United’s manager is, the club will never get out of this rut.