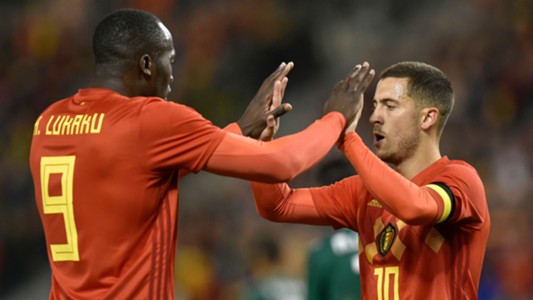 If you’ve been even a casual fan of international soccer over the past four years then you’ve heard about Belgium.

“They’re going to be the next world powerhouse!” “They’re in the midst of a golden generation of talent that will see them compete with Germany and Brazil!”

Those are just some of things being thrown around about Belgium, and it’s not completely undeserved. They boast a roster that features two-time Premier League player of the year Eden Hazard, Golden Glove winner and former La Liga Goalkeeper of the year Thibaut Courtois, Kevin De Bruyne, Jan Vertonghen, and Toby Alderweireld just to name a few.

Belgium have been everyone’s “sleeper” for four years now. Their exit in the quarterfinals of the 2014 World Cup was chalked up to inexperience, the players got their first taste of a tournament run and next time they’d be better. A 3-1 loss to Wales in the quarterfinals of Euro 2016 was seen as manager Marc Wilmots not knowing how to get the best out of all the talent at his disposal, costing him his job.

Following Euro 2016, Belgium hired former Everton and Wigan manager Roberto Martinez. It was certainly an interesting choice. Not only does Martinez have zero experience at the international level, but he wasn’t even that successful in his two Premier League stints (yes, he did win the FA Cup with Wigan in a season they were relegated). To top it all off, Martinez has never worked with players as talented as the ones Belgium has.

But one player he has worked with before is striker Romelu Lukaku, and therefore it’s no surprise that Martinez is running his attack through his talisman. In the 20 games Martinez has been in charge of Belgium, Lukaku has 19 goals, two more than he had in his first six years with the national team.

Martinez recognizes the talent that Belgium has in its attack and while he lets them fly, make no mistake this attack runs through Lukaku. Of Eden Hazard’s 22 international goals, only eight of them have come under Martinez and just one of De Bruyne’s 14 have come in the past two years.

At the moment, it looks like a brilliant strategy and Lukaku has shown no signs of struggling to carry the load. But while this looks great now, it could be exactly what undoes Belgium in the World Cup.

At this point, almost all Premier League fans are familiar with the stat about who Lukaku scores again. In his six full Premier League seasons, Lukaku has scored 101 goals across 210 appearances. However, he has scored just 16 goals in 67 career appearances against the Premier League’s “Top-Six” clubs. While many had originally suggested that was because he played for a smaller club like Everton, the trend continued this season when he scored just one goal for Manchester United in 10 games against the other five top-six sides.

In theory, that stat should be completely irrelevant for Belgium as there’s a big difference between club and international football. Unfortunately it’s not, as Lukaku’s affinity for feasting against smaller teams and disappearing in big games has translated to the international stage as well.

Lukaku has scored just three goals in international tournaments. The first one came as a substitute in extra time against the USA (who are almost certainly not a top team) in Brazil. The other two came at Euro 2016 against the Republic of Ireland, one of the weakest teams in that tournament.

Lukaku enters the World Cup in scathing hot form. He’s scored eight goals in Belgium’s six games since qualifying ended. Those goals came against Mexico (2), Japan, Saudi Arabia (2), Egypt, and Costa Rica (2). All of those teams will be participating in the World Cup, but none of them would be considered in the top tier of international teams. The only team he failed to score against? Portugal, who would also be the only team that might be considered in the upper echelon of teams.

The reason for Lukaku’s struggles is simple. He’s the type of player that can be man-marked out of a game by a good center back, and the bigger teams all tend to have the best center backs.

But that’s exactly where things can get dangerous for Belgium. They open their World Cup with matches against Panama and Tunisia, two teams whose defenses Lukaku can eat alive. With the way Belgium relentlessly attack, it’s entirely feasible for Lukaku to have five goals in the first two games before taking on England.

Whether they win the group or not, none of the teams in Group H have such great defenses that would completely shut Lukaku down, which would make them favorites to make the knockout stage. And in the round of 16, they would face a Group H team among Colombia, Japan, Poland and Senegal and should be favorites to win that.

When the quarterfinals come around, Belgium will have already played four games where their main attack has been to feed the ball to Lukaku (on top of all the pre-World Cup games where they’ve done that). At that point, that style will be the one everyone is used to. Once they come up against Brazil or Germany (their likely quarterfinal opponents), those teams will be able to take Lukaku out of the game and force Belgium to play a different way, something it’s still unclear if they’re capable of doing.

The opening games against Panama and Tunisia could be a blessing or a curse for Belgium. Lukaku is more than likely to score a few goals which could get him full of confidence ahead of the knockout rounds, or it could just be his career trend continuing; he’ll dominate against the smaller teams and fade away against the big boys.

If the latter occurs, Belgium will have to adapt. The only question is, can they?