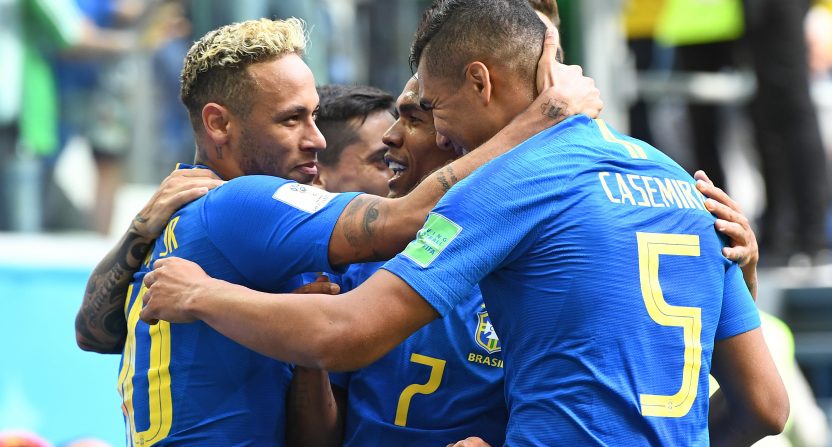 These days, that’s certainly true. European teams have now won four World Cups in a row. Before 2002, South American teams had only failed to win two World Cups in a row once, back in the 1930s. This year’s World Cup saw all four semifinalists come from UEFA, and six of the eight quarterfinalists also came from the continent.

Europe’s dominance is only continuing to grow in the international game. Prior to 2010, no European team had ever won a World Cup that was hosted outside of Europe. The continent then boasted back to back triumphs in 2010 in South Africa and in Brazil in 2014.

It wasn’t always like this. While Europe has always had the dominant club leagues, international football once belonged to CONMEBOL. Brazil were the gold standard, winning three of four tournaments between 1958 and 1970 and two of three from 1994 to 2002. Sprinkled in the middle was a reign of Argentinian dominance as they captured titles in 1978 and 1986.

But these days, it’s a different story. Sure, Argentina made a run to the final in the 2014 World Cup, but besides that instance, three of the past four tournaments have featured all European finals. Every four years, there’s lots of focus on why Brazil is so good and this will be their year, but it never happens.

It’s not that Brazil is no longer producing world class talent at an obscene rate, or that Argentina is no longer turning out talented players, because they most certainly are.

The simplest answer here is globalization. The game is more popular than it’s ever been before and that popularity has led to an influx of cash.

And that cash is in Europe.

There’s a belief from many people in South America that their national teams are struggling because their players are leaving for Europe at a far earlier age. With all the money that European clubs have to spend, they have the capabilities of scouting South American players, and they don’t want to wait to sign them.

What’s then happening is that while South American countries are still producing very talented players, they’re not staying long enough to develop that ‘national identity.’ When all the players converge with the national team, you have to mesh all those styles back together.

Say what you want about national identity, but look at the most recent World Cup winners. An overwhelming majority of Germany’s 2014 team came from the Bundesliga. Spain’s 2010 winners primarily played in La Liga. Italy’s 2006 team exclusively played in Serie A. France seems to be the exception.

This theory doesn’t just apply to South America. Ajax used to be a powerhouse of developing Dutch football talent. These days players are leaving Ajax at 19 or 20 years old, rather than 23 or 24. “Coincidentally” the Netherlands have missed out on qualification to their two most recent major tournaments.

Players leaving early is certainly a problem but it’s happening for one reason. Money. There’s money in the European game and despite the talent South America produces on the field there’s no money in South America.

We now know why that’s the case.

Over the last three years we’ve learned not just that FIFA is a very corrupt organization, but we learned just how corrupt they are. Amongst the most corrupt regions has been CONMEBOL. When soccer took off globally, especially the Copa America, the money didn’t go back towards the federations and the growth of the game – it simply lined the pockets of the men in charge.

Money that could have been spent on infrastructure and domestic leagues was instead going to people with the right connections. At the time, that didn’t look like it would hurt anyone, but as the years have gone by the lack of development in these countries has finally caught up to them.

South America used to be the kings of international soccer. Not only have they now fallen well behind Europe, but the gap doesn’t look to be closing anytime soon. Brazil, Uruguay, and Argentina all boasted very old teams at this past World Cup, they’re going to need to re-tool over the next four years.

The divide doesn’t seem to be going away either. Say what you want about youth tournaments, but you’d have to go back 11 years to find the last time a CONMEBOL team won the U20 World Cup when Argentina took home the top prize with a team that featured Sergio Aguero and Angel Di Maria. In other words, the last South American youth team to win it all is the generation that is already too old for the senior level.

Meanwhile, Germany’s youth team just won the Confederations Cup, and their re-tool will be done before you even realize it started. England just ran to the semifinals with a very young team. Belgium boasted a team that was nearly entirely in their prime, and they may have another run in them. As for France, most of their players aren’t even in their primes yet.

International soccer used to be a two horse race between Europe and South America. That’s no longer the case, and that doesn’t look likely to change.