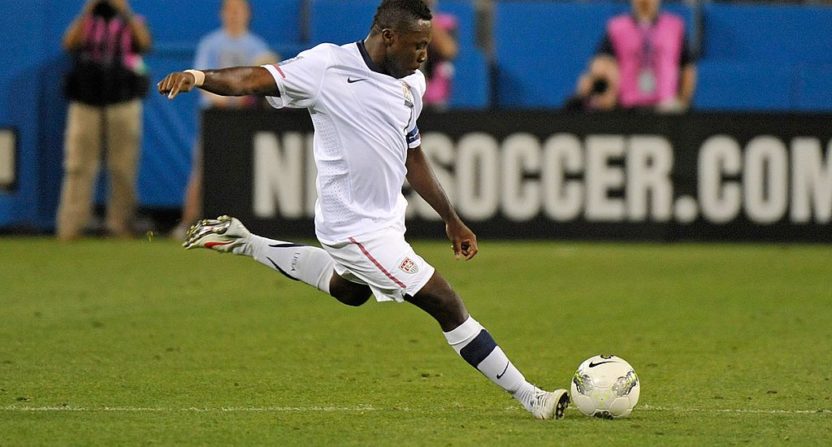 Once upon a time Freddy Adu was going to win the United States the World Cup. And make soccer the number one sport in America. And become the next Pele. And probably be able to stop global warming too along the way.

Few athletes have been hyped in the way that Freddy Adu was in the early 2000’s because we had never seen anything like it at the time. At just 14 years old, he was given his first professional contract, even scoring a goal for DC United in MLS and being part of a team that won MLS Cup in 2004. But slowly over the course of time, the hype train slowed to a grinding halt and Adu has become something of a mythical figure from the sport’s past. Soccer has grown tremendously in America over the past 13 years, but it’s almost like Adu came from a different era altogether now.

Adu has been a soccer vagabond over the last decade, wandering the world trying to make it professionally somewhere. Anywhere. His first big move was to Portugese powerhouse Benfica, but he never made it there as he was loaned out to clubs in France, Greece, and Turkey. Then came a second stint in MLS that was moderately successful, Adu lasted a couple seasons for the Philadelphia Union from 2011-2013 scoring 7 goals in 35 appearances.

After that was 2 appearances for Bahia in Brazil in 2013, 1 appearance for FK Jagodina in Serbia in September 2014, 5 appearances for KuPS in Finland in 2015 (including being loaned out to their minor league side), and then 12 appearances back in the States with the Tampa Bay Rowdies of the USL.

Whew. Time to take a breath.

Alas, Adu’s travels still aren’t over yet. With his tenure with the Rowdies coming to an end last season, the next stop on Freddy Adu’s world tour is Poland. The club Sandecja Nowy Sacz tweeted out this picture of Adu promoting his linking up with them. In case you were wondering, Nowy Sacz just won promotion to Poland’s top flight and will be playing in the Ekstraksala for the first time in their history this season.

Just in his mid-20’s, Adu has lived through a lifetime of ups and downs. It’s easy to forget that he made 17 appearances and scored 2 goals for the USMNT in his career as well. Last year in an interview with Goal.com, he took responsibility for his career falling short of expectations.

“I’m not going to lie, that stuff bothers me. It hurts, “ Adu told Goal USA in an exclusive interview. “I’m only 26. Yes, I’ve had some tough times in my career. I’ve had some great times as well. In the end, I can’t control what people say. It wasn’t my choice or decision to be compared to Pele when I came into the league.”

Don’t go feeling sorry for Adu just yet, though. While he never asked to be compared to the Brazilian legend, what Adu can do is finally accept the blame for how he has handled his career.

“Everything that I’ve been through and everything that hurt my career, I brought it on myself because I didn’t dedicate enough time to it,” Adu said. “You can say, ‘Oh, I had a lot too early,’ or say whatever you want. But at the end of the day we all need to grow up at some point, and that has just all hit me this offseason. It really did.”

Adu hasn’t yet been offered a contract, but if the Polish translation of this article from Radio Krakow is to be believed, he will just be training with the side. And better yet, there are reports from Poland out there that the manager was either unaware in Adu coming to train or not interested in him.

It’s impossible to fathom for any athlete, but now at 28 years old Adu has lived half of his life as a professional soccer player. Perhaps Adu catches on in Poland, perhaps not. But odds are that he’ll be on the move soon once again on his globetrotting journey nobody could have ever expected.