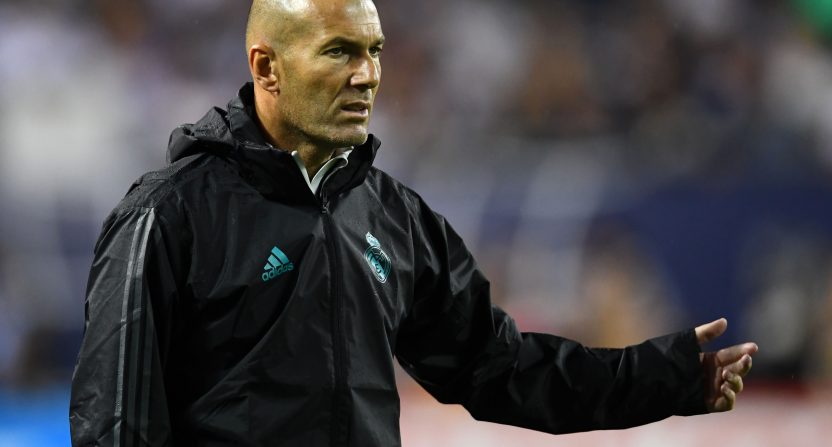 “You either die a hero or you live long enough to see yourself become the villain.” Zinedine Zidane isn’t dying but he is pulling a George Costanza and getting out of Real Madrid while he’s ahead.

The manager who enjoyed what might be the greatest debut of any manager ever, revealed he will be leaving Real Madrid. Zidane became Real manager after spending three years with the B team and had one of the more successful runs of any Real manager, which is saying something. In his tenure, Zidane won a La Liga title, Supercopa title, two UEFA Super Cups, two Club World Cups and three consecutive Champions League titles. Despite becoming the fourth team to win three or more consecutive Champions League titles (Real in 1956-60, Ajax 1971-73, Bayern Munich 1974-76), Zidane became the first manager ever to win three straight with the same team.

Many showed surprise that Zidane would leave Real Madrid but in a way it’s genius. Think about it. This is a job that demands perfection and this team is getting older. Zidane saw the writing on the wall and despite winning two Champions League titles in two years in charge, Zidane was coaching for his job against Liverpool. Whether that’s due to Florentino Perez or due to their fans, they don’t want to lose and put out near impossible expectations. Zidane met those expectations in Europe, what more can he possibly do?

When Zidane started, I was worried that he would damage his reputation as a player at Real. Zidane was a legend on the pitch and was entering his first big job at Real Madrid. Zidane’s legacy as a player would buy him a bit of time but that would wear thin very quickly if things got bad.

Instead, Zidane hit the ground running and won trophies. But it was a lack of wins against Barcelona and seeing them win La Liga this year made people in Madrid antsy. Zidane got to have his cake and eat it too. He was a legend as a player, he will go down as a legend as a manager and remained successful.

Surely, Zidane will be courted by many teams. By going out on a high note, he’s going to be the name floated around with every big job. While he certainly has the trophies to plop down on any chairperson’s desk and get any job out there, the question will be whether he can build a team to compete for trophies.

Real was a different beast. Zidane came in while the team was already set on winning trophies and they all knew what they were doing. Zidane did some coaching but like when Phil Jackson ran the Chicago Bulls of the 90s, Zidane’s job was more to keep egos in check and keep the locker room focused on the task at hand. That is also needed elsewhere but if he goes to a place like Manchester United, he’s going to need to work on building a team.

In terms of who goes to Real Madrid, surely Mauricio Pochettino is the favorite even though Tottenham will fight tooth and nail to keep him. Antonio Conte is eventually going to be available and because of that, Maurizio Sarri remains available and both could be options. And while we’re talking hypotheticals, let’s throw Arsene Wenger into the mix.

This is a rare time where a breakup in soccer has left everyone happy. Zidane got them three straight UCL titles, the board, players and fans love him and he loves them back and there’s no hard feelings. Real Madrid managers usually get a short leash and their tenure comes at a painful end. For Zinedine Zidane, he is leaving Real Madrid on his own terms and maybe that’s his greatest achievement.