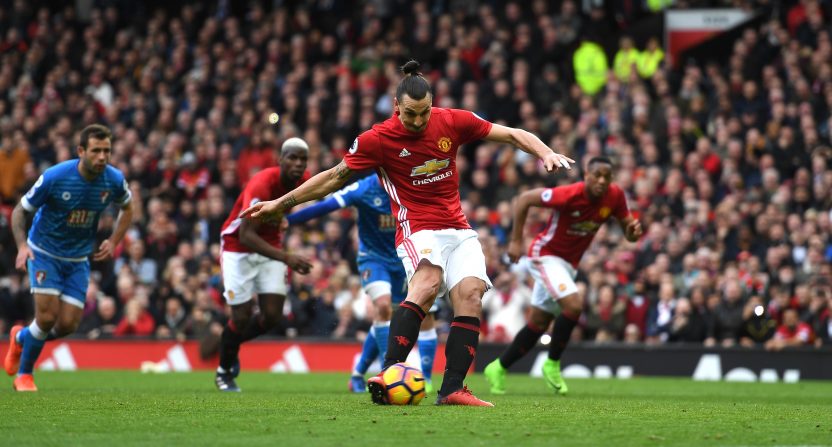 With Zlatan Ibrahimovic set to miss Manchester United’s next three English matches, the club will need to find another source of scoring if they hope to climb into the top four. The 35-year-old has been a constant threat in front of net this season but after him, United have struggled to score this season.

Ibrahimovic has found the back of the net 26 times this season. The second highest scoring player on the team is Juan Mata, who’s scored nine times. There is a disparity here, and it’s one Jose Mourinho is going to have to find a solution to, until his talented striker returns.

If there is a silver lining to Ibrahimovic’s suspension it’s that it comes at a perfect time, or as perfect as the situation allows. Ibrahimovic will miss Monday’s FA Cup quarterfinal meeting with Chelsea, so that means he will only miss two Premier League games. Those two Premier League matches are Middlesbrough and West Brom.

Those League matches should be winnable for United with or without Ibrahimovic. But his absence might highlight how fragile the club can be when he’s not on the scoresheet. As seen against Bournemouth, United aren’t invulnerable against some of the League’s smaller sides. Earlier in the season, Manchester United beat West Brom 2-0 with both goals coming from their Swedish Striker.

United will need to turn to other sources to pick up as many points as possible in the coming weeks. Marcus Rashford might be the player Mourinho leans on the most in Ibrahimovic’s absence. The 19-year-old has taken a back seat this year, only scoring three goals in 11 appearances this season. The young England International has to see the opportunity here. Rashford hasn’t scored in the Premier League since September.

It’s going to be challenging for anyone stepping into Ibrahimovic’s shoes, but Mourinho does have some, out of the box choices he could make. No one on the roster is going to be able to do exactly what the Swede can. So why try to force it? United do have some unconventional goal scoring options, like Mata and Henrikh Mkhitaryan. The latter has been playing very well of late after being left out in the cold for so long early in the season. Both Mata and Mkhitaryan are not strikers, but their movement and passing ability could give players like Rashford a chance to make runs through defenses that will likely sit deep against the Red Devils.

Whomever Mourinho chooses to deputize for Ibrahimovic, the coming weeks will be vital in the club’s top four chase. United’s final few weeks are going to be challenging with League matches against Arsenal, Tottenham, Everton and Chelsea. Dropping points now has to be out of the question. United are three points back of Liverpool with a game in hand. If United are going to get back into the Champions League they’d be wise not to slip up now.

After a slow start to the season, United have become incredibly consistent, with very few slip-ups. They remain unbeaten in the Premier League since October 23 and have only lost twice in their last 31, a Europa League group stage game against Fenerbahce and the second leg of the EFL Cup semifinal against Hull City that still advanced United to the Final.

Despite this, Manchester United still sit in sixth place, winning 35 of 51 points on their unbeaten run, as the teams they’re chasing continue to keep pace. United can’t let Ibrahimovic’s three-match ban undo the work they’ve put in. That said, goals win games and United have been terribly reliable on one man to score those goals, They’ll need to find a way to step up in Ibrahimovic’s absence or they run the risk of allowing one moment of rashness elbow them out of the top four race.