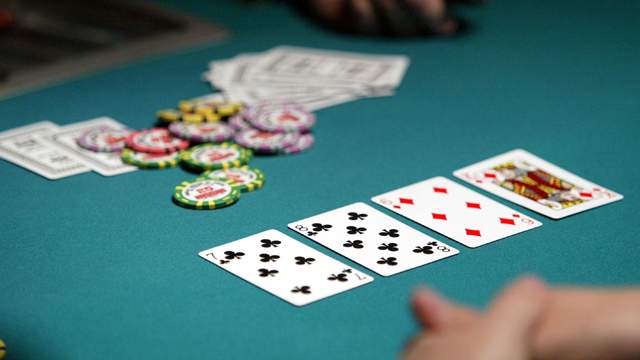 Robots and AI powered machines are slowly taking over the world and will probably overpower humans at some point. But until that day comes, they’re shooting hoops or winning on Jeopardy!

Now, AI has taken over the poker world, and a program defeated some of the top pro players of the game. Named Pluribus, the program was designed to not only map out the mathematical computations to determine the odds that their hand will improve, but also to learn the patterns of humans around it and adjust strategy so it doesn’t leave any tells. In the end, it’s a near perfect strategy when it comes to playing poker.

According to the Washington Post, Pluribus isn’t just meant to play poker. The learning power of the program is being tested on the poker table because inventors hope to use the technology on a variety of methods including “self-driving cars, auctions, contract negotiations and decisions about product development.”

Just like a human, Pluribus began by learning how to play, using its previous hands to learn what to do and what not to do. Next, Pluribus played against humans. To give it a real test, the machine played against professionals. Despite the occasional win by the human, Pluribus won overall, noting that playing with $1 chips, it could make $1,000 per hour playing poker.

While the best poker players can do the same things Pluribus does to be a successful player, the program does it faster and more efficiently. Also, Pluribus doesn’t take subconscious human bias and what is viewed as “conventional logic” to play, which is better in the long run.

Pretty much, Pluribus is unpredictable and employs a strategy that cannot be read by others. Pro players may be able to use betting strategies on other humans to scope out a tell, especially during online play when you cannot read facial tells, but Pluribus could be conservative on one hand and then go all in on the next without any rhyme or reason.

And when a bluff or strategy fails to work, Pluribus doesn’t overreact and sticks to its gameplan. Some of the better pros might not do this, but others may become overaggressive after losing a big hand or getting called out on a bluff because they want to get that money back as soon as possible. That, more often than not, can lose more money and make the situation worse.

Poker pro Jason Les explained a situation to the Washington Post where Pluribus folded a three of a kind hand, a move that for multiple reasons, a human likely wouldn’t do.

Les recalled another hand that Pluribus lost but that revealed something about the bot. Pluribus had three twos, a pretty good hand, and made one of its typically aggressive bets, three times the pot value, about $3,000, as Les recalled. Then a human opponent went all in. Pluribus folded.

That sounds like a bad move on its face. Pluribus lost so much money! But the bot didn’t care. The bot sticks to a strategy that seems to work inexorably over time even if there are losses in the mix. That includes folding without a worry and not fretting about lost money. A human would be very reluctant to simply give up on a hand with three deuces and with $3,000 already committed to the pot, Les noted.

“A lot of humans might be, like: ‘I’ve got three of a kind. I’ve got such a good hand. I can’t let this guy push me around,’ ” Les said. “The AI doesn’t have an emotional response like that. It just has a strategy.”

The entire study from Science is fascinating. It’s also one more thing bots can do better than humans as we get closer and closer to the takeover of the human race. The things Pluribus is doing now can also make human lives better, but that depends on how you look at the situation.