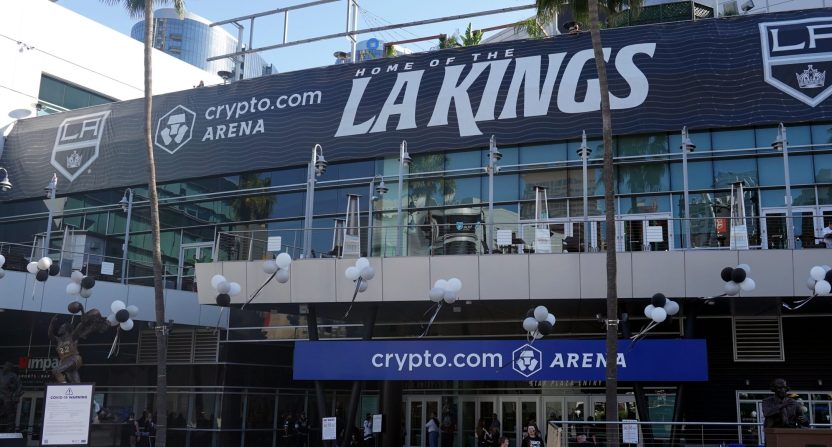 If Matt Damon didn’t convince you to buy cryptocurrency yet, you might not be too affected by the market collapse that has washed away billions of dollars of value from companies like Bitcoin, Coinbase, and Crypto.com. However, those companies are certainly feeling the effects and that is also affecting their sports sponsorship deals.

The total value of the cryptocurrency market has dropped by around 65 percent since last fall and many analysts predict the sell-off will continue in the months ahead.

While crypto exchanges and companies lay off workers and freeze withdrawals in the wake of massive value losses, that’s also put a damper on the burgeoning crypto sponsorship opportunities in the world of pro sports.

Crypto.com made headlines last year by becoming the new naming partner of what was formerly known as Staples Center and the Miami Heat now play their home games in FTX Arena, named for a Bitcoin exchange. Meanwhile, the Dallas Cowboys signed an exclusive deal with a crypto blockchain partner, FTX became MLB’s “official crypto exchange” and Coinbase became the NBA’s “exclusive cryptocurrency platform partner.” The signal had been sent up that sports franchises were happy to accept actual U.S. currency to form sponsorship deals with these cryptocurrency companies.

Now, however, that push appears to be on hold. According to the New York Post, Crypto exchange FTX has dropped out of talks to have a jersey patch on the Los Angeles Angels’ uniform. A similar patch deal with the Washington Wizards and another crypto company reportedly fell through in recent days as well.

Columbia University sports management professor Joe Favorito told The Post that it’s going to be a while before we see any major crypto sponsorship deals happen again.

“What money hasn’t been spent already you’re going to see curtailed — just like we saw during the dot-com bubble,” he said.

As far as those huge naming rights deals, it doesn’t sound as though either company is looking to back out just yet, but with visions of Baltimore’s PSINet Stadium, Boston’s CMGI field, and Houston’s Enron Field dancing in people’s heads, it’s certainly not out of the question if things keep trending the way they’ve been going for crypto.