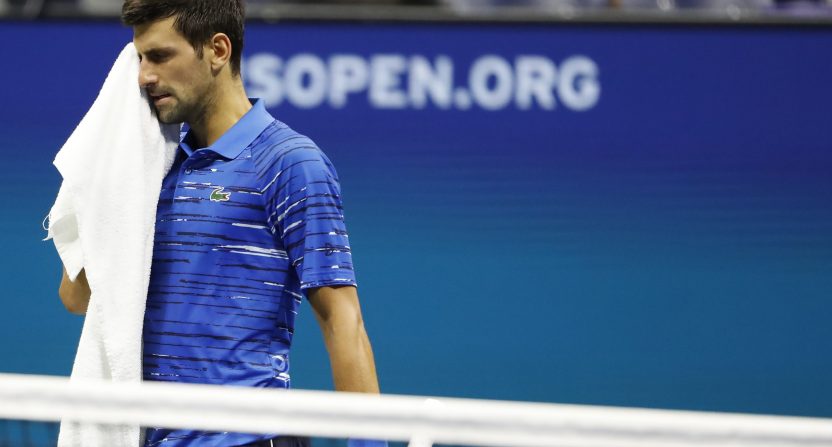 The No. 1 men’s tennis player in the world has tested positive for COVID-19, continuing an unfortunate trend of pro tennis players contracting the virus. Novak Djokovic revealed in a statement that he and his wife both have COVID-19. Novak is reportedly not showing symptoms.

This came after Djokovic organized the Adria Tour tennis exhibition where other pro tennis players participated in Belgrade, Serbia and Zadar, Croatia. Unfortunately, these exhibitions seemingly became a catalyst to spread COVID-19 because Djokovic is the fourth player from them to test positive, after Borna Ćorić, Grigor Dimitrov, and Viktor Troicki tested positive.

Djokovic said he was extremely sorry and said he organized the tournament “when the virus has weakened” but that’s part of the issue with leagues trying to come up with plans to continue play or decide whether or not fans should attend based on the current situation.

If the past few months was any indication, the situation surrounding the COVID-19 pandemic differs very rapidly and the situation at the time of planning likely isn’t going to be same as the situation when you actually play. It’s smart to have contingency plans and options so you can react to whatever situation comes your way, but if you organize something that’s meant to take place even a month from now, the world could look better or worse, and most likely it’ll be worse.

It sounded like Djokovic didn’t adjust, which makes sense given how he’s reacted to the pandemic as a whole. Despite a recent uptick in positive cases (though much of that came from Brazil and the US), the Adria Tour didn’t have any social distancing measures and players were interacting with fans in facilities that were full of spectators.

In addition, Djokovic went all anti-vaxxer in April for revealing he wouldn’t receive a vaccine, if one became a reality, in order to compete and he broke lockdown rules in May by practicing at a tennis club in Spain before things reopened. Djokovic also openly considered not playing in the US Open, not for any safety concerns, but because he felt the US Tennis Association’s restrictions on entourage size and undergoing a 14-day required quarantine were “extreme.”

Novak Djokovic joins a long list of people who seem to be too dumb and too inconsiderate to do the bare minimum for others during the pandemic. And because of that, Djokovic got a bunch of people, as well as him and his wife, sick. If only he, and others, could have an ounce of foresight to actually do the right things from the start instead of learning his lesson the hard way, the world would be a lot better off at this point.