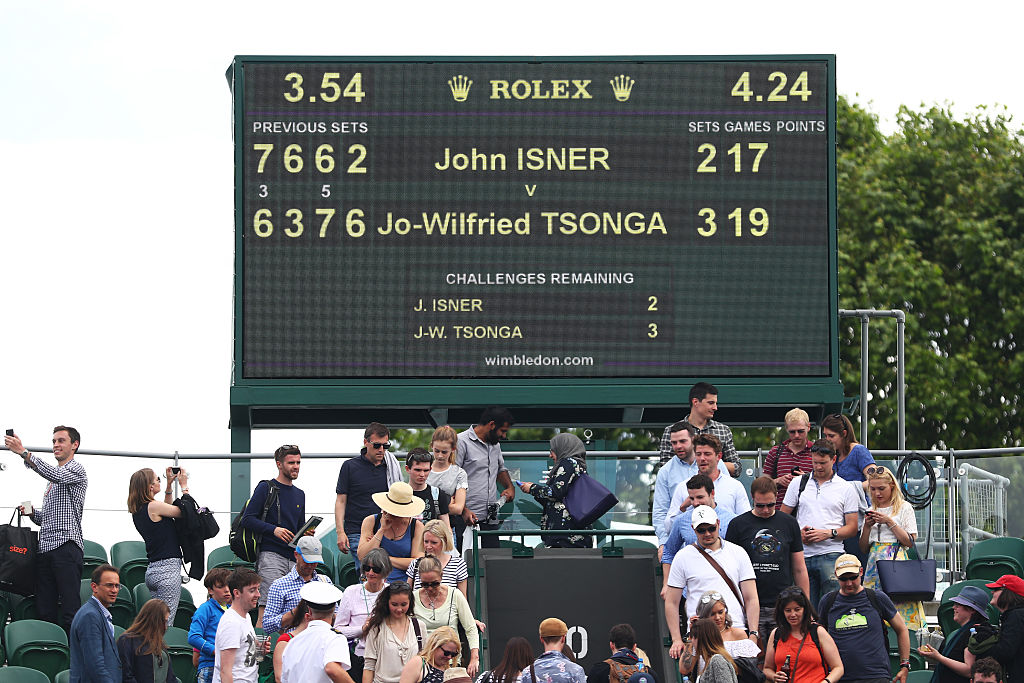 American tennis player John Isner is best known for playing the longest tennis match in the history of the sport at Wimbledon in 2010.  Isner finally defeated Mahut 6-4, 3-6, 6-7, 7-6, 70-68 in a match that shattered every record in the book.  This year at Wimbledon, 18th seed Isner played in another fifth set marathon, but this time he came out on the wrong end against 12th seed Jo-Wilfried Tsonga.

Wimbledon has no fifth set tiebreaker, so theoretically two players could continue playing one another until another asteroid comes to earth, a theory which Isner and Mahut seriously put to the test six years ago.  In this year’s tournament, Isner and Tsonga didn’t quite go to that extreme, but they still went for quite a while in the decisive set.  Tsonga finally defeated Isner in Sunday’s third round matchup 6-7, 3-6, 7-6, 6-2, 19-17.

Like his match against Mahut, Isner’s match against Tsonga spread out over multiple days.  It began on Saturday and ended with the final two sets on Sunday.  While this match lasted 4 hours and 24 minutes, it’s still less than half of the Isner-Mahut match, which incredibly lasted 11 hours and 5 minutes over the course of 3 days.

Ironically enough, Mahut made it one round longer than Isner in this year’s Wimbledon tournament.  Mahut lost in the fourth round to American Sam Querrey.